Store Page
Naval Action > Guides > Pilgrim's Guides
This item has been removed from the community because it violates Steam Community & Content Guidelines. It is only visible to you. If you believe your item has been removed by mistake, please contact Steam Support.
This item is incompatible with Naval Action. Please see the instructions page for reasons why this item might not work within Naval Action.
Current visibility: Hidden
This item will only be visible to you, admins, and anyone marked as a creator.
Current visibility: Friends-only
This item will only be visible in searches to you, your friends, and admins.

Captain Collister's Escapomatrix
By Pilgrim
The Escapomatrix aims to provide the disengaging Captain with advice on how best to expeditiously remove themselves from combat against pursuing opponents.

Comments
Timestamp
Last updated: 2016-07-02 (patch 9.9)
Introduction
Many Captains falsely believe that they under certain circumstances are doomed to be either sunk or boarded and taken when facing a particular ship or set of ships while in a specific ship of their own. This is in a majority of the cases completely untrue as almost all ships in Naval Action perform well enough on at least one point of sail in order to effectively disengage from combat against a pursuing enemy.

As the retreating party, it is often possible to dictate the terms of the chase and set yourself up, both before and during combat, on the for you most favourable point of sail. Below follows then a matrix illustrating the ideal point of sail on which to escape while aboard a given ship and being chased by another given ship.

Naturally, when pursued by multiple ships, and in particular (if the enemy is strategically-minded) a mix of ships strong on differing pointss of sail, escape may become a challenge or indeed impossibility as intially feared. In those instances, one must hope for reinforcements or enemy mistakes in order to escape.
Explanation
Along the vertical axis, highlighted in blue, is a list of ships that you may be sailing. Along the horizontal axis is the same list of ships although here highlighted in pale orange to signify that this is your opponent's ship.

At the intersection between your ship and your opponent's you can read that point of sail at which your ship most greatly outperforms your opopnent's. The colour coding represents the difference in percent of your maximum speed at this point compared to theirs. The key for this colouring is on the right of the matrix. So if the number at the intersection is against a red background it means that despite this being your best chance of escape, you are still slower than your opponent on this point! But remember not to give up all hope - ship outfitting plays a large role in determining a ship's maximum speed. So even if things look dire, if you have outfitted your ship for speed, and your opponent has equipped theirs for e.g. hull strength, you may yet escape! 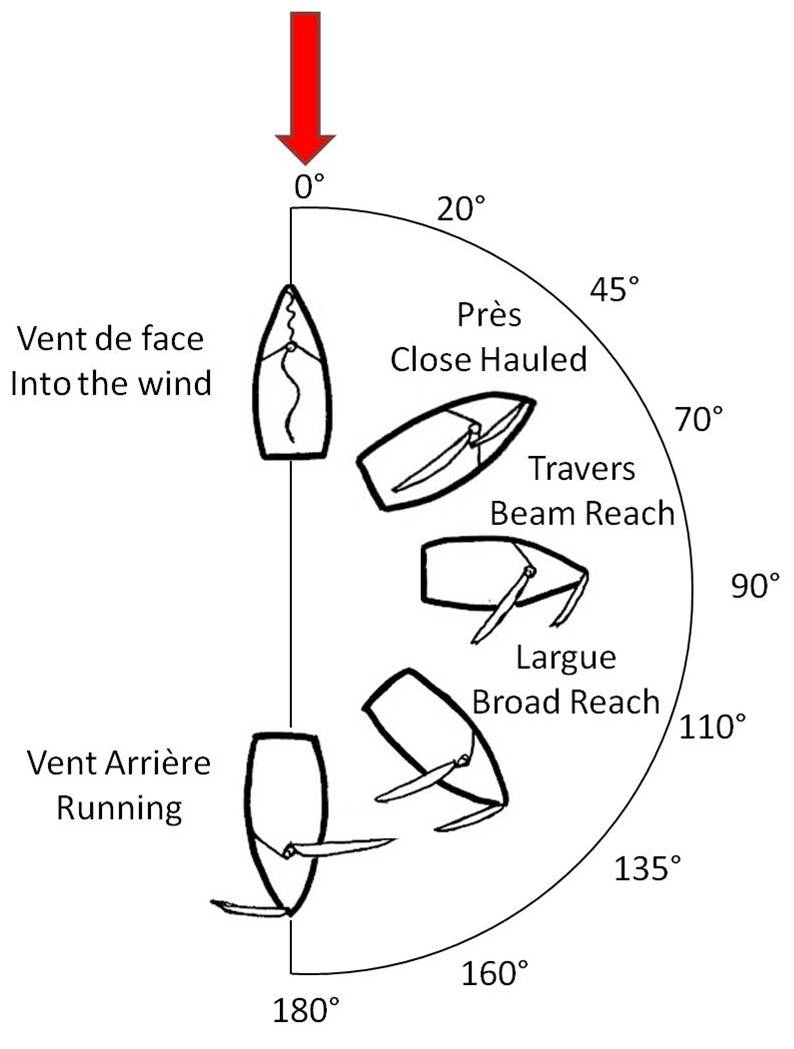 On the right here is a reminder of the different points of sail you may require to set. Note that the speeds used to calculate this chart are the default values for each ship. For this reason, if there is very little % difference, you may find the enemy catching up on you due to superior outfitting, or having been built of fir, while you are built of live oak, for example. However, with more than 15% speed bonus over your opponent, there are few situations where you cannot escape - and indeed in most cases in the matrix, you will find that your ship outperforms the enemy in excess of these 15%.

You will clearly see that there are, in general, very few instances, such as when a Trader's Brig is pursued by a Renommee, that you will almost inevitably be caught. Also, you may note that I never recommend escaping on point 15, even though this sometimes is the most advantageous for your ship. This is because the loss of speed frequently accompanying such a course is very seldomly worth it. In instances where ships attempt to escape at this point, it is frequently the case that the pursuer simply sails less upwind and presents their broadside to the slowly moving ship attempting to escape.

You will also note that some ships are simply faster than many others, i.e. they outsail other ships on all points. The abbreviations for the ships below should be self-explanatory.
Escapomatrix 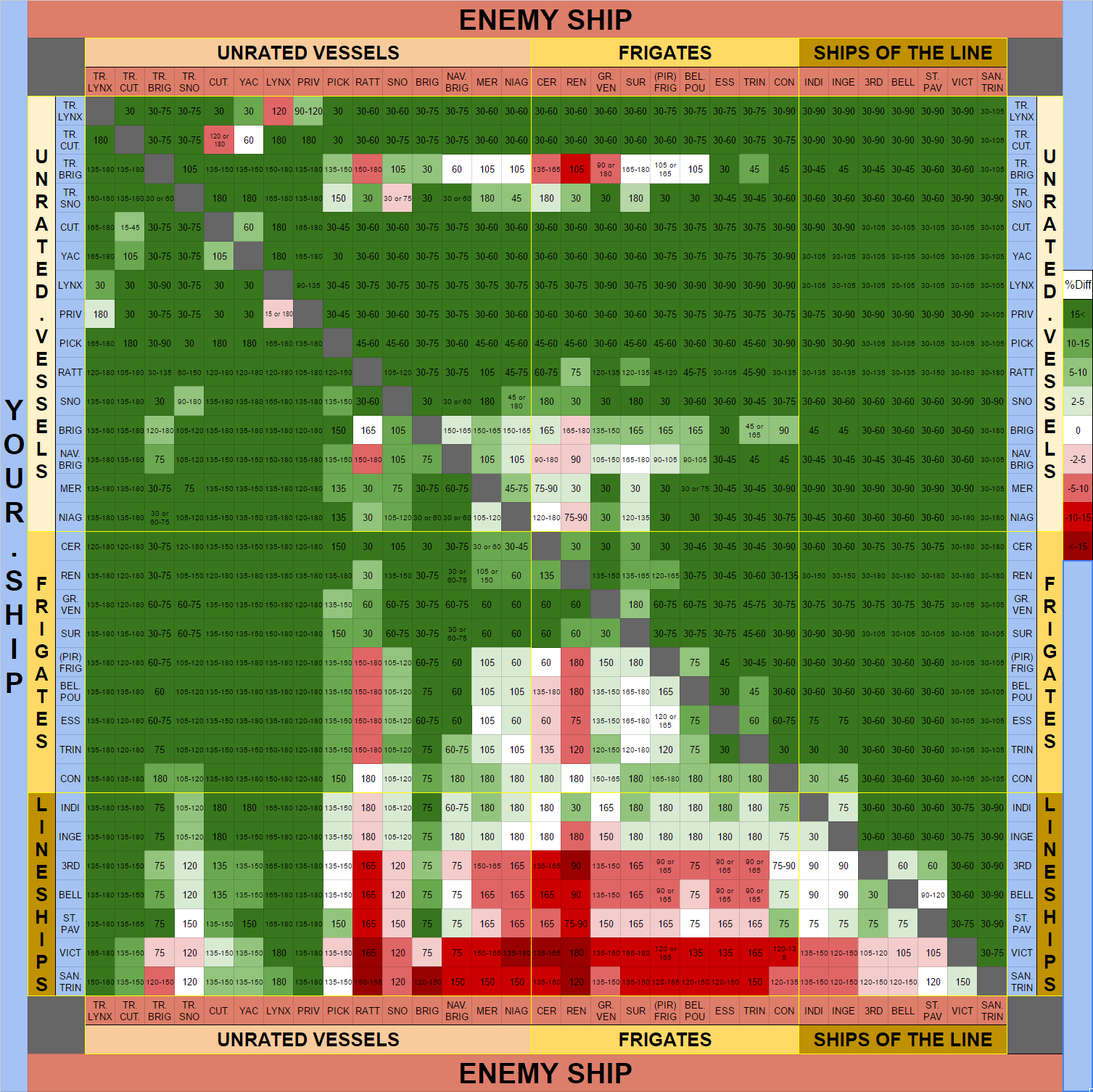 Open this file in its own window

Pilgrim  [author] Nov 4, 2016 @ 3:45pm
Sorry to disappoint, Vovolov, but I don't have the time to take the measurements required of the new ships and add to the chart. I'll make sure to pm you though when I get round to it in the future!

Pilgrim  [author] May 1, 2016 @ 6:49am
Hehe, thanks! :) Just wait til I add the most recent ships I've tested; the Belle Poule, Essex and Le Gros Ventre. Le Gros Ventre is the new definition of OP! It sails at above 90% maximum speed between points 90-180 so should prove an interesting merchant ship!

Pilgrim  [author] Apr 6, 2016 @ 10:59pm
Ahoy, that's a good idea, next time I update it I'll change to give full ship name instead of abbreviations! I'm updating and expanding the chart as I go on! Need to level up and build more ships! :)

McBrite Apr 6, 2016 @ 7:49pm
Will you ever expand on this? Loving it!
Little Tip: Please use full names for ships, rather than 2 letter shortcuts... In the heat of battle you really don't wanna spend 2 minutes to decypher these and find the 2+ ships involved in your battle while your ship is being shot out from under your rear... ;-D