Greenlight > Games > indeterminatus's Workshop
Greenlight is being retired. For more information on how to submit games to steam, refer to this blog post.
This item has been removed from the community because it violates Steam Community & Content Guidelines. It is only visible to you. If you believe your item has been removed by mistake, please contact Steam Support.
This item is incompatible with Greenlight. Please see the instructions page for reasons why this item might not work within Greenlight.
Current visibility: Hidden
This item will only be visible to you, admins, and anyone marked as a creator.
Current visibility: Friends-only
This item will only be visible in searches to you, your friends, and admins.
Atomic Butcher: Homo Metabolicus
Description Discussions1 Announcements1 Comments91 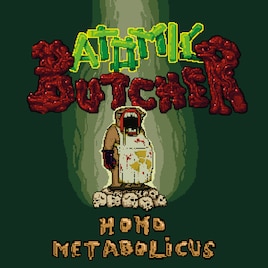 indeterminatus
Online
See all 7 collections (some may be hidden)

We believe that a game can only be judged by playing.

Humbly, we put a playable demo into your hands. Currently, there are versions available for:

There are still some bugs in there, but it's quite safe to say that the overall experience and feel of the game is already representative of the final product.

As of now, there is no installer required. Simply download the correct ZIP file, unzip it somewhere on your computer and launch the game! If you don't like it, simply delete the folder.

In case anything crashes or the game behaves in a bad way, we would really appreciate it if you could send us feedback -- otherwise, we have no chance of improving.

You find the pre-alpha demo on our website[www.atomicbutcher.info].

Deranged, fast-paced, ridiculously gory, post-apocalyptic retro 2D platformer with 360° aiming. You play the role of a crazed mutant freak who roams the wastelands in search for meat. Use your own body (along with its fluids) and a plethora of weapons to smash, grind, flame, ..., devour all life in the wastelands. Don't give society a chance to rebuild - instead, just eat everything and everyone. Use fire, electricity, wind, ... to your own advantage. Be the anti-hero the world may or may not deserve!

Features
Even though the game is still in development, we can already promise the following features:

Story
… humanity finally managed to destroy itself: The world has ended.

The details have long been forgotten … a great collapse, mass madness, cannibalism, no more free wi-fi. After the downfall, strange beings emerged from the radiated, poisoned remains …

Beings such as you: Ages ago born as a human in the old world, then changed into something else, mutated by radiation and toxic waste. Your brain has been completely fused with your intestinal tract, and combined with your superhuman strength you have become the perfect weapon of mass digestion. Behold the next step in human evolution: “♥♥♥♥ Metabolicus”!

Endlessly you roam the wastes, deranged and on a mad quest for fresh meat … a scourge for the few surviving pockets of humanity, a walking manifestation of all that lead us to our end in the first place, pure desire for instant gratification and hunger, you are only known as

An epic struggle of gastronomic proportions is about to ravage what is left of the world!
Popular Discussions View All (1)

Got any feedback for us (especially after playing the demo)?
indeterminatus
< >
91 Comments

If you're interested in selling the game as a part of bundle, write bundle@indiestore.org

Atomic Butcher: Homo Metabolicus has been Greenlit and is now listed in the Steam store. For the latest information, purchase options, and discussions for Atomic Butcher: Homo Metabolicus, please see it on the Steam Store or in the Steam Community.
Visit Store Page
For more details Visit Community Hub
For latest discussions
If you really, really want to, you can continue to the Greenlight page. Information on this page may be out of date, since all the action has moved to the areas noted above.