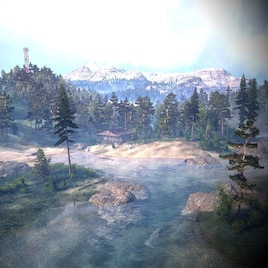 IceBreakr
Offline
See all 3674 collections (some may be hidden)

This item has been added to your Subscriptions. Some games will require you to relaunch them before the item will be downloaded.
Description
Version: 3.9

Isla Abramia is IceBreakr's latest creation for Arma 3. It is a mix of lush greenery and snowy mountains. He wanted to give players of Armaverse something new to toy with and mix of green and snowy mountains always attracted him as he lives in a similiar place. Project has been on the sketchboard for years since the golden days of Arma 2.

Map is 10.24x10.24km, consists of one large island and three smaller ones. It is well suited for a 3-sided warfare. Of course, any other mission type can be played on it with no problem. There is one large paved airfield in the main valley where capitol of Yolandi is. Also, three other unpaved runways can be used by smaller transport planes up to size of a C130.

Permission to re-upload in a bundle?
Sarissa
< >
243 Comments

Julius Apr 27 @ 1:45pm
Hello IceBreakr, gorgeous map mate, did you use any shaders or lightning effects for the pictures? or is it just arma at its best?

visualfox4.0 Mar 22 @ 8:18am
this map is sick. unique vibes. tour it in the editor listening to the goldeneye soundtrack.

Codename Ater Mar 7 @ 1:12pm
Is there any place I get a big picture of the Isla Abramia flag or is the flag somewhere as a prop?

Snatch Goblin Jan 26 @ 8:36pm
Anybody else have a problem when attempting to use the zeus with "all unofficial addons" in the editor? This is the only map that has the problem, it makes none of the modded units show up in the zeus menu.

I contact you following your map, I am on a French community and we are on the creation of an rp server, and we are currently looking for a map, your map would interest us enormously and we would like to know if you would be ready to sell us the sources of your map so that we can remove buildings and do something very beautiful for a French community without touching any asper of the land the only thing would be to remove the buildings

I thank you in advance for your response

Professional Failure Sep 19, 2021 @ 2:43pm
Hey! I keep getting an error while loading the map on my dedicated server, something like "no entry config/bin/CFG_Worlds.Isla_abramia.cfg
do you have any idea how to fix?