Greenlight > Games > SkyReacher's Workshop
Greenlight is being retired. For more information on how to submit games to steam, refer to this blog post.
This item has been removed from the community because it violates Steam Community & Content Guidelines. It is only visible to you. If you believe your item has been removed by mistake, please contact Steam Support.
This item is incompatible with Greenlight. Please see the instructions page for reasons why this item might not work within Greenlight.
Current visibility: Hidden
This item will only be visible to you, admins, and anyone marked as a creator.
Current visibility: Friends-only
This item will only be visible in searches to you, your friends, and admins.
ONE TOWER
Description Discussions0 Announcements5 Comments86 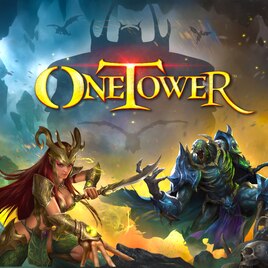 dra99on
Offline
See all 6 collections (some may be hidden)
Kickstarter

View ONE TOWER in the store

We're excited to announce that we've entered Closed Beta for One Tower! Thanks again to everyone who participated in the Alpha testing, your feedback has been incredible.

Kickstarter backers who pledged for the Closed Beta access tiers are now receiving their keys. Over the coming days we'll also be letting in more players to our Closed Beta who sign up on our site or win keys during our live Twitch streams.

We're also giving our early supporters a chance to reserve their game names before the rest of the world gains access to the game. Head on over to http://www.onetowergame.com to reserve your name and/or sign up for the closed beta.

See you in the game!

We've been streaming since 4pm PDT today and will be streaming non-stop (no sleep?!) until Friday, 4pm PDT. Come join us for fun and giveaways. We'll be playing some of our favorite games, ONE TOWER and hanging out! Hope to see you there. https://www.twitch.tv/onetower

"..controlling your minions in LoL is very important, but in One Tower, it means a hell of a lot more.." - Games Ring

OVERVIEW
ONE TOWER is a fast-paced head-to-head multiplayer online battle arena game that combines elements from the RTS and RPG genres. Players will unleash customized minion waves, command powerful Heroes, and cast potent spells to defend their stronghold against enemy marauders or invade new lands to take down their opponent's tower.

ONE TOWER features quick 10-15 minute matches and fast paced, arcade style gameplay. pitting two players against each other in epic duels of strategy and skill. Players will also compete in tournaments, leagues and special events.

FEATURES
WHY ONE TOWER?
As an indie development team, we're making a game that WE want to play.

Players will experience an entirely different kind of MOBA unlike any they've played before. Our game is designed for fast-paced, arcade style head-to-head combat. Players will pick up power-ups for damage and speed boosts, take out a siege demon, control gold resources, and customize their minion waves. To add to this, we've added a few surprises including traps that can be triggered on the map to help you ambush your opponent from afar.

Beyond this experience, we're bringing a tug-of-war experience to the MOBA genre through minion wave control. Players can control their minion wave configurations, whether you want tanks, casters, healers, air, DPS or siege, you can configure your wave and change them on the fly to dominate and outwit your opponent.

To top all of this, matches take anywhere between 10-15 minutes, though we've had a few games last for 6 minutes from our more skilled players at the studio.

We hope you'll give ONE TOWER a try when we release!
< >
86 Comments

SkyReacher  [author] Aug 1, 2016 @ 6:33pm
We're giving out Closed Beta keys for One Tower. Go to http://www.onetowergame.com/ and click the Sign up for Beta link at the top to get yours.

Hellphy Jul 18, 2016 @ 9:09am
oh right finally competetive game where you dont have to relay on your useless teamamate 100% indivudual skill based game have big expectations from you guys good luck :)

SkyReacher  [author] Apr 29, 2016 @ 12:51am
Thank you everyone! We are excited and all heads are down working on the game and integration into Steam. Tracking well right now for Alpha and early access by May/June depending on how the game is looking by then.

ONE TOWER has been Greenlit and is now listed in the Steam store. For the latest information, purchase options, and discussions for ONE TOWER, please see it on the Steam Store or in the Steam Community.
Visit Store Page
For more details Visit Community Hub
For latest discussions
If you really, really want to, you can continue to the Greenlight page. Information on this page may be out of date, since all the action has moved to the areas noted above.