Store Page
XCOM 2 >  Workshop > RealityMachina's Workshop
This item has been removed from the community because it violates Steam Community & Content Guidelines. It is only visible to you. If you believe your item has been removed by mistake, please contact Steam Support.
This item is incompatible with XCOM 2. Please see the instructions page for reasons why this item might not work within XCOM 2.
Current visibility: Hidden
This item will only be visible to you, admins, and anyone marked as a creator.
Current visibility: Friends-only
This item will only be visible in searches to you, your friends, and admins. 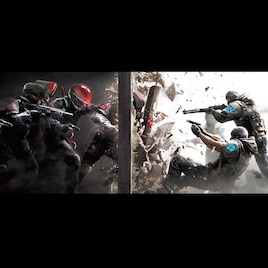 65 items
Description
This mod adds in additional mission types to spice up your campaigns, ranging from Guerilla Ops to Retaliations.

Description
NOTE: If you're having further issues with difficulty due to mods and what not, how the mod sets up the mission type(s) can be found at XComMissions.ini, located at (wherever XCOM 2 is installed)\steamapps\workshop\content\268500\647242867\Config

Haven Siege - The local resistance fighters has managed to hold off ADVENT in time for XCOM to arrive, but have been whittled down to their last line of defence. Hold off ADVENT's siege long enough for the non-combatants to evacuate. Any surviving fighters will join up with XCOM afterwards.

Afterwards, you can try to secure the area after denying ADVENT their goal, or you can just evac the area right afterwards.

Effectively an attempt at bringing over EU's style of Base Defence as a mission type. The reinforcements will come whether you're done with the current group or not, and you got a whole bunch of enemies you're going need to deal with at the start. (Starting missions should be around the low 40s.)

The turns required for 2 pods per every other turn and the number of resistance fighters on Haven Sieges can be customized in XComHavenSiege.ini.

PR Tour - Someone high up connected to ADVENT is doing a PR tour in the outlying areas to convince people to move to the ADVENT City Centers. Take care of them while they're out, but be careful, ADVENT's willing to pull out some big guns if the VIP ends up biting it during the mission.

By big guns I mean Firebrand stays out of the fight for 2 more turns, even if the timer had already expired (it will restart it in that case), and the pace of reinforcements increases.

Evac is required for the mission.

Basically a hybrid of attack and defence, you're given nearly all the time in the world to try setting up, but once you start the fireworks, you better dig in for a bit of a fight.

Rescue VIP from Rioting City - A relatively ranking resistance member has been captured, but Resistance provocateurs have managed to set off riots to distract ADVENT while XCOM goes in to rescue them. You have up to 8 turns to secure the area as best as you can before ADVENT learns of the escape attempt and forces Firebrand out of the area, who won't be able to come back for 8 turns, and reinforcements will come in regularly. Surviving resistance provocateurs will try to hook up with XCOM and will be willing to help out.

Adaptation of PR Tour for Council Missions after hearing about Beagle wanting a council mission where you could actually stick a bit and fight in a city center building instead of having to constantly move across the map. Evac mechanics work exactly like PR Tour, you should be able to call it down once the timer has expired.

City Center Item Recovery - ADVENT's movement of forces to the rural outbacks to try to deal with us, has opened a gap in their city defences. We can grab a piece of intel critical to our efforts while ADVENT's strength in their cities are lowered.

Like a vanilla item recovery mission, except the timer won't start ticking until combat has started.

Neutralize Advent Project VIP - one of the various science personnel vital to the Avatar Project's process has gotten complacent and stayed in a single facility we can raid. We can deal a significant blow to the Elders' progress if we can take them out.

Like a neutralize mission, except as a counterpart to traditional Sabotage missions. Timer will also not start until combat has started, to help compensate for the increased amount of enemies.


NOTE: PR Tour, Rioting City, Neutralize ADVENT VIP, and City Center Recovery have conflicts with ABA2, and will have no starting enemies past a certain force level when it's active. To fix this, go to (wherever XCOM 2 is installed)\steamapps\workshop\content\268500\647242867\Config, and follow the instructions in XComMissions.ini to alter the arrMissions accordingly.

Mission types should be grabbed by the game's mission handler without any issue, though it'll be a bit random whether it picks any added types or a vanilla type.

Resistance fighters that currently spawn in Haven Siege missions can have their equipment upgraded through the Proving Grounds, and if the player enables plasma weapon research in the XComHavenSiegeSettings.ini located at (Documents\My Games\XCOM2\XComGame\Config), the Research Lab as well.

It can also be altered so resistance fighters auto-acquire the latest equipment from XCOM, just set NoTechsRequired to true with either mod configure menu, or altering XComHavenSiegeSettings.ini. (This will also let the mod use mod-added weapon tiers like Lasers or ETC Weaponry)

ISSUES:
:
Enemies Don't Seem To Be Spawning
Clear out your config files in your Documents\My Games\XCOM2\XComGame\Config folder. Game doesn't like alterations to XComMissions.ini when it's not regenerated.

If this issue is confined to reinforcements only, you most likely have an issue with two different alien enemy mods conflicting with each other (like ABA2 and Advent Specter), please check their XComMissions.ini to resolve the issue. (ABA2 has a guide on what to change)

Attack of the Resistance Clones! - if the character pool is allowed to be used and a small enough pool is in effect, it may spawn already dead or active soldiers as resistance fighters in Haven Siege and Rioting City Extractions.

This can be disabled in the XComHavenSiegeSettings.ini with OverridePool set to true, or in-game with MCM.

My resistance rookies can't move! - this seems to be a incompatibility issue with Dynamic Stats Development, as long as it's active it'll cause haven rookies to not function normally.

I'm using Guerilla War but some of these missions don't follow its rules - go to this mod's XComMissions.ini and for every IsTacticalObjective=true, set it to false. I set it to true so I didn't have to mess around with how the game defined mission success to work with the base game (in case another mod modified it like say, Guerilla War or mods that make Sweep objectives optional), but it does result in you getting all the loot after mission completion.

Setting it to false will make any missions not auto-collect any corpses after mission completion.

I don't want these rookies add in a way to get rid of them - There's a dismiss button.

Configurable Mission Timers makes this harder!
Add the following rules to XComTacticalMissionTimers.ini in that mod:

Reinforcements on Haven Siege are unbeatable! - you can adjust when the mission goes into two reinforcement per every other turn mode (or even just disable it entirely) in the XComHavenSiege.ini in the mod's config folder, located at (wherever XCOM 2 is installed)\steamapps\workshop\content\268500\647242867\Config

Thanks
Thunderbeast for making the Korean localization.

Mike The Muton for making the thumbnail image.

MantLemon for making the Chinese localization.
Popular Discussions View All (20)

greyhound Jul 11, 2021 @ 11:11am
I like the idea, but played with this mod a few days installed and no one mission started.
I am still in the mid of the campaign now.
I do not have ABA2, Guerilla War mods installed.
Any solution? Thank you.

KT Chong May 21, 2020 @ 1:36pm
Why does this mod have all the Proving Ground and Research settings in the Mod Config Menu?? I want additional missions, not to change anything in Proving Ground or Resarch.

Zoinho1 May 17, 2020 @ 8:04am
Rescue VIP from Rioting City, when timer is over I gain control of the VIP regardless if i have unlock his cell, is intentional? I can't move him out until one of my soldiers unlock the door, BUT enemies can go inside the cell and shoot the hostage.

Yes that happened, I didn't reach the cell on time and one ADVENT soldier goes inside and try to kill the hostage, thankfully was on early game.