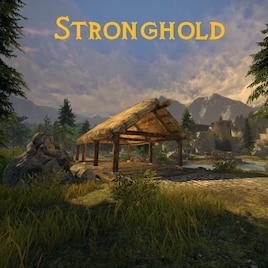 Vesanus
Offline
See all 14 collections (some may be hidden)

This item has been added to your Subscriptions. Some games will require you to relaunch them before the item will be downloaded.
Description
Since I'm no longer working on mods/maps for Chivalry.. I think it's about time to release the uncooked files.
Feel free to make your own versions or use/copy stuff for your own mods and maps!

Here are the files: https://www.dropbox.com/s/1r0blvqm1bk24ua/RandomDungeonStronghold.zip?dl=0#

If you have any questions about the maps, feel free to poke me.

Warning: There is still a glitch that causes players to spawn without weapons or be unable to move. If you know what causes this bug, please let me know.

Stronghold is a Team-objective (TO2) map featuring elements from various strategy games. Harvest resources by chopping down trees or mining stone with a pickaxe. Build a village to unlock weapons, armor, siege engines and more! Defend your base by building a palisade and attack with trebuchets and mercenaries! - Form your own strategy and defeat the enemy!

Main Objective: Destroy the enemy's Crystal, while defening your own.

It is advised to play the map with enabled Dynamic Lightning (not shadows). Without it, the map will have incorrect lightning, since there are a lot of dynamic actors on the map.

You need at least 2 players to start the game, otherwise you won't be able to leave the spawn.
You can TEST the map without actual players by typing in console: addbots 1
After adding bots you will need to type in console: startgamemanual.

Additional info:
Map might not work with mods that change damage output for Hatchets and Pickaxes. (like Mercs).
If someone can confirm this, please let me know.

* Removed Multi-Mesh Matinee animations for many structures. (Except walls, towers and mining camps).
* Buildings will now instantly pop up when built.
* Changed now immovable dynamic actors to AOCStaticMeshes.
* Players that get stuck while a structure is being built, will get teleported to the campfire.

- Added a Farmless map variant (TO2-StrongholdF_p) - Just to see if Farms are causing "the glitch".
- Miscellaneous minor changes and fixes.

Note: I don't really know what causes that glitch where players can't do anything/spawn with invisible weapons - Hopefully this version fixes it, if not i'll just keep digging..

- New spawn system - (Press "use" to spawn). [This should force players to spawn properly]
- Fixed few minor shop bugs.
- Some other minor fixes/tweaks.

- Added destroyable/repairable Gates.
- [Fix attempt] Players not spawning as peasants.
- [Fix attempt] Issues with invisible weapons.
- Small Shop tweaks.
- Removed cooldown on purchaseboxes. (res-stealing bug)
- Overall Kismet optimization.
- Removed side entrances to the "Crystal-House".
- Increased Crystal barricade HP from 1000 to 2500.
- Added Crystal guardians (A.I)
- Fixed a bunch of stuck spots.
- You can now chop trees that are outside the anti-rush barrier.
- Increased the number of spawn points to 64 total.
- Lowered Campfire cost from 30 to 20.
- Lowered Trebuchet cost from 45 to 35.
- Added few tips that will randomly pop in chat.
- Added HUD indicators for built shops.
- Fixed Some particle effects not activating.
- Made the Anti-Rush barrier slightly more visible.
- Some other minor fixes/tweaks.

- Possible ladder fix
- Warning message will now show up if the crystal is under attack.


If you feel generous and enjoy my work, feel free to donate:

cslantz Sep 4, 2016 @ 9:22am
any way to make the rounds time unlimited? me and a bud keep getting up points but at the time we get to fight we have 5 minutes left and never break through


Since I'm no longer working on mods/maps for Chivalry.. I think it's about time to release the uncooked files.
Feel free to make your own versions or use/copy stuff for your own mods and maps!

Here are the files: https://www.dropbox.com/s/1r0blvqm1bk24ua/RandomDungeonStronghold.zip?dl=0#

If you have any questions about the maps, feel free to poke me.

LS-Venator May 26, 2016 @ 9:55am
Don't want to sound dumb , but i m not sure i understood everything. So basically me and a friend could build our own fortresses and spawn armies or at least some warbands and then attack each other ? Can we control the armies?
< >