Greenlight > Games > bateleur's Workshop
Greenlight is being retired. For more information on how to submit games to steam, refer to this blog post.
This item has been removed from the community because it violates Steam Community & Content Guidelines. It is only visible to you. If you believe your item has been removed by mistake, please contact Steam Support.
This item is incompatible with Greenlight. Please see the instructions page for reasons why this item might not work within Greenlight.
Current visibility: Hidden
This item will only be visible to you, admins, and anyone marked as a creator.
Current visibility: Friends-only
This item will only be visible in searches to you, your friends, and admins.
King Machine
Description Discussions0 Announcements1 Comments37 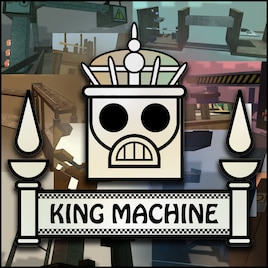 bateleur
Offline
See all 6 collections (some may be hidden)

View King Machine in the store

In between fixing bugs and improving levels I've been working on a much longer, slower trailer which shows off a few of the things you can do in the game. It's now been added to the Greenlight page, so have a look for yourself!

King Machine is a game about building machines.

Explore an abandoned factory, finding useful machinery and gradually building the tools and structures you need to restore the factory to operation. What was the original purpose of the factory and why was it shut down? To achieve complete control you will eventually need to confront and overcome the powerful machines protecting the factory's most critical resources.

Gameplay in King Machine is third person, controlled by mouse and keyboard.

True Design Freedom - No Puzzles
In King Machine you can construct whatever structures and machines you choose to reach your goals. The zones of the factory are not puzzles and you won't find yourself stuck because you can't think of some specific trick the game insists you use. There are plenty of hard challenges, but whether you get through with half a dozen hilariously shoddy machines, a single beautiful masterpiece or a sneaky trick it's all fair play.

King Machine has been in development for over five years! The time wasn't spent on ceaseless coding and artwork. The game has been through numerous prototypes and earlier versions, trying to find exactly the right kind of gameplay to make machines really matter.

With the exception of Ed Fry's brilliantly atmospheric music and Emma Newman's outstanding voice acting the game is entirely the work of designer Dom Camus. You can follow @fastramdesign on Twitter for news of development and Greenlight progress.

Currently King Machine is in beta testing, but should be ready to launch soon... once it's Greenlit! If you like the look of the game, please do spread the word.

Once the Windows version is released, MacOS and Linux versions will follow shortly afterwards.
< >
37 Comments

King Machine has been Greenlit and is now listed in the Steam store. For the latest information, purchase options, and discussions for King Machine, please see it on the Steam Store or in the Steam Community.
Visit Store Page
For more details Visit Community Hub
For latest discussions
If you really, really want to, you can continue to the Greenlight page. Information on this page may be out of date, since all the action has moved to the areas noted above.