Greenlight > Games > Chequered Ink's Workshop
Greenlight is being retired. For more information on how to submit games to steam, refer to this blog post.
This item has been removed from the community because it violates Steam Community & Content Guidelines. It is only visible to you. If you believe your item has been removed by mistake, please contact Steam Support.
This item is incompatible with Greenlight. Please see the instructions page for reasons why this item might not work within Greenlight.
Current visibility: Hidden
This item will only be visible to you, admins, and anyone marked as a creator.
Current visibility: Friends-only
This item will only be visible in searches to you, your friends, and admins.
NAL Is Alive
Description Discussions1 Announcements3 Comments47 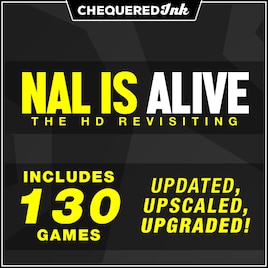 Chequered Ink
Offline
See all 8 collections (some may be hidden)

View NAL Is Alive in the store

We're happy to announce that the first public version of NAL Is Alive is now out on Steam Early Access! Featuring over 130 games, all of which are available and many of which have already been upgraded, there's potentially hundreds of hours of content to enjoy already - and it's only going to get even better from there.

Thank you for your patience and for your support, and we hope that you like the game (well, games) - development will carry on in full force throughout the remainder of 2016, all through 2017 and beyond, but we feel that even now there is a plethora of content to enjoy in it!

I want to apologise firstly for the lack of updates since NAL Is Alive got Greenlit. But I'd like to post an update here on the fact that the game (well, games) is in development currently. Progress is great, but with the scope of the project, it'll be a while.

The Early Access release will be as soon as we can physically make it. All of the games work from the launcher (although most of them are still the old versions). The blocking factor at the moment is that the music used in the majority of the games was only okay for non-commercial use. We're unable to contact a large portion of their creators to license the tracks out as well due to the fact that many of them are about a decade old, from hobbyist musicians that have sinced changed aliases and/or moved on in life.

Because we're developing NIA in GameMaker: Studio, and a lot of the games were from earlier versions of GameMaker, changing the music also means we have to get them running in Studio - so that's adding further time.

There is an upside to all this. Because Studio has native support for the Steam API, we've added Steam Leaderboard support via a proprietary system that easily allows us to have each game relay its stats to the NIA Launcher, and the NIA Launcher to Steam. You will also be able to see stats and leaderboards for each game directly within the launcher.

Here are some screenshots of the Launcher as it currently stands, as well as one of the >130 games, It Only Takes a Second, which we've recently got working in Studio and connected our proprietary leaderboard system into: 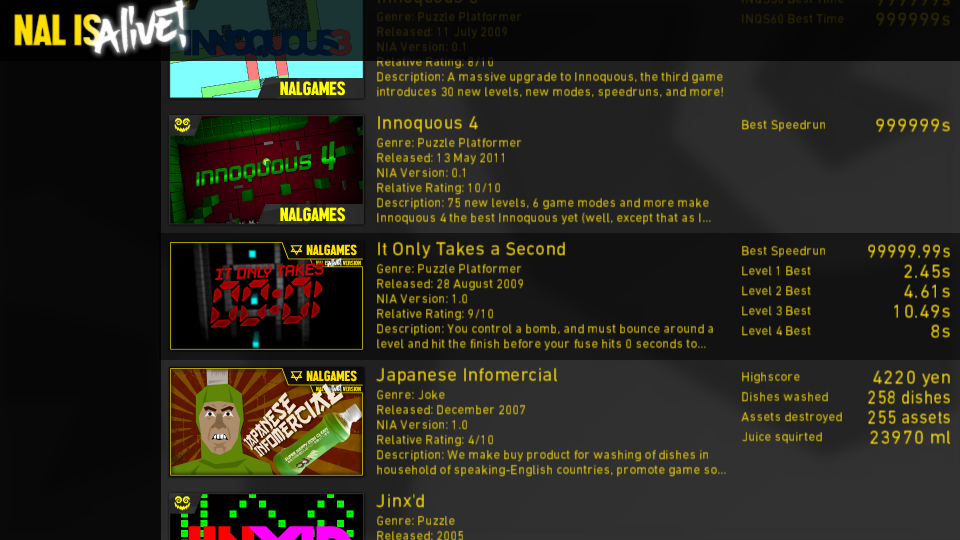 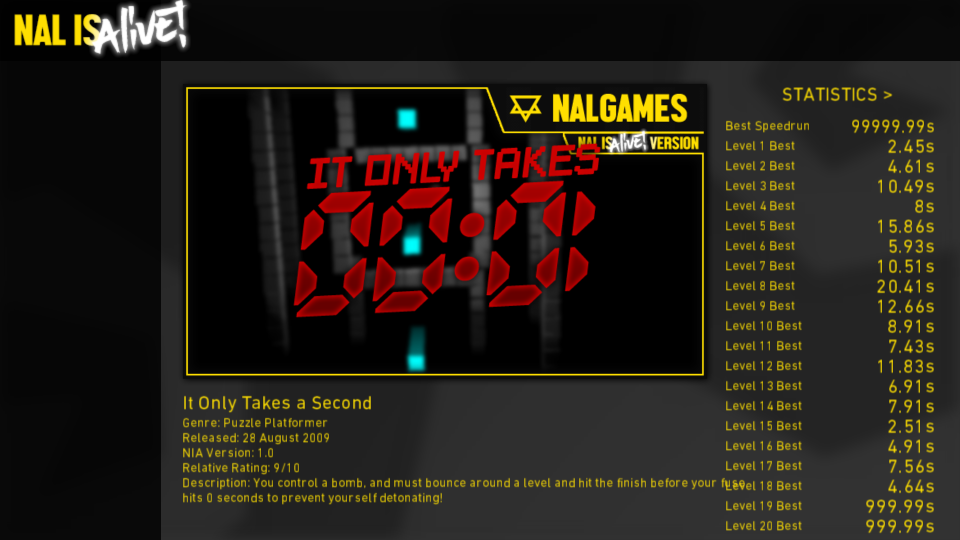 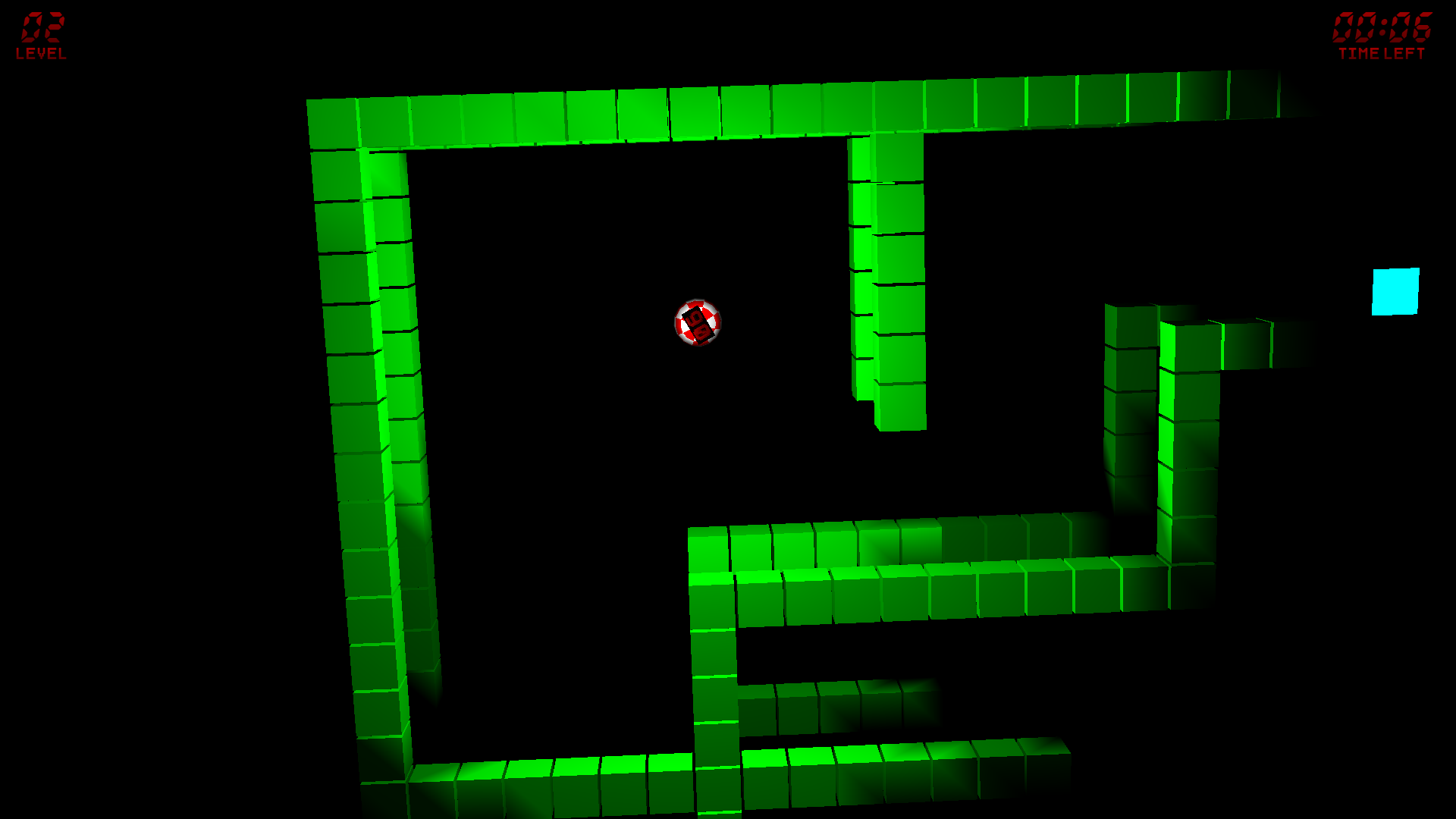 As a little extra flavour, I've added all the games I (NAL) have released under Chequered Ink that don't have commercial releases as a bonus - these were already coded in Studio and already used commercial-friendly music, so required little to no work to work with NIA, and have the extra benefit of NIA's online leaderboards.

We're unsure when the game will be releasable, as it is dependent on how each game's transition goes - there have been days when 4 games got done due to a smooth conversion, but also times when one game has taken several days alone.

We might make the first versions of the game in Early Access contain fewer games and simply disable the ones that still require conversion, or we might hold off until each one is LEGALLY releasable commercially, if not a perfect conversion - either way, I personally want to make sure that the first version of NAL Is Alive to be with you all is as good as it can possibly be, as complete as it can possibly be, and with you within a reasonable timeframe - I still want the Early Access version to come out before the end of 2016, and am committed to making that happen barring any catastrophe.

Thank you for your patience, and I'm happy to answer anything you might be wondering!
- NAL

Read More
Description
Release date: Early access: Q4 2016
12 years. 130 games. All made by one person. And now, exclusively for Steam, all in one big self-contained pack, updated to 1080p with better controls, better compatibility, better everything!

NAL Is Alive is a retrospective containing everything by me, NAL, one half of Chequered Ink, released under the NALGames pseudonym between 2003 and the July 2015 formation of Chequered Ink Ltd, of which I am one of two founders.

And everything inbetween! Ever wanted to be a prostitute on a pogo stick? SohoPogoHo hears you! Fancy going around peeing on people? Signal Failure! You can assume the role of a ginger killing the anti-gingers of the world in Infidels, or become a little robot fixing the big robot it resides in with Titan Tighten.

Need a rhythm game fix? Bullet Hills! Need a music game that has no rhythm? Melodika! Need to inject yourself to help forget the nightmarous legion of female stalkers planning on kissing you to death? Yeah, that's in here too. So's the one where you're a dog in a ball unloading clips of everything from water pistols to rocket shotguns at mutant bags of blood. And the one where you get to play an interactive advert for a fictional Japanese dish cleaner while a man touts its superior viscosity to you.

Accompanying this, there's a chronologically-ordered PDF densely packed with information on each of the 130-ish games included in the pack, along with back-story, and information on the other stuff I made or did, including my five-year stint at YoYo Games, that time I got broadband, and that time I did over 200 fonts.

It's presented in a light hearted way, but this pack truly does represent a huge chunk of my life - everything I made independently from being an 11 year old kid that had to download GM onto a school computer and bring it home on 3.5" floppy discs thanks to the speed of my home internet, to a 24 year old jumping into the world of full-time indie.

This will take time to release as it is a lot of work getting these relics up to modern standards, and I'll be able to release it as Early Access and keep it under development as more games receive improved compatibility, but I'm excited to do it and bring you all updates on how it goes. I'm also aiming for a Mac release.

Please note: All screenshots and videos currently shown in the videos are of the games at their present resolutions. Versions in NAL is Alive will be targeted at 1920x1080 maximum.
Popular Discussions View All (1)

Chequered Ink  [author] Dec 4, 2016 @ 5:02am
This month for an Early Access release is targeted - we've just managed to make every game in the pack okay to be released commercially, although a few games are currently broken (but still playable in the pack).

Dan is currently on getting some achievements into the game, while I (NAL) am doing a little extra on the Launcher and on getting a few of the games with issues a little better for release, but after that, it's just up to the confirmation process - once this is done, the game will be out straight away.

Humble Corv. Dec 3, 2016 @ 9:14pm
Finally you people got greenlit, I'm so happy you guys were. Had voted for this in May. Do you have a definite date yet for release?

Chequered Ink  [author] Oct 4, 2016 @ 5:41am
It's still in development at the moment, looking to have it out in Early Access by the end of the year but some games still contain issues that need fixing at the moment :)

NAL Is Alive has been Greenlit and is now listed in the Steam store. For the latest information, purchase options, and discussions for NAL Is Alive, please see it on the Steam Store or in the Steam Community.
Visit Store Page
For more details Visit Community Hub
For latest discussions
If you really, really want to, you can continue to the Greenlight page. Information on this page may be out of date, since all the action has moved to the areas noted above.