Store Page
Cities: Skylines>  Workshop > arrowsforu's Workshop
This item has been removed from the community because it violates Steam Community & Content Guidelines. It is only visible to you. If you believe your item has been removed by mistake, please contact Steam Support.
This item is incompatible with Cities: Skylines. Please see the instructions page for reasons why this item might not work within Cities: Skylines.
Current visibility: Hidden
This item will only be visible to you, admins, and anyone marked as a creator.
Current visibility: Friends-only
This item will only be visible in searches to you, your friends, and admins. 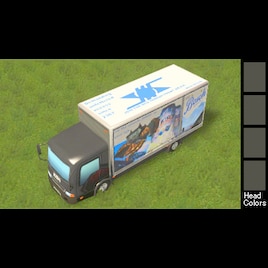 arrowsforu
Online
See all 52 collections (some may be hidden)

This item has been added to your Subscriptions. Some games will require you to relaunch them before the item will be downloaded.
Description
BoschBeer Truck repaint by Arrowsforu (AKA DefCynodont119 on Hard Light Productions)

This is a repaint of stmSantana's Paintable Truck. ( http://steamcommunity.com/sharedfiles/filedetails/?id=635247141 ), it is Mostly an inside joke for anyone who visits Freespace open's modding forum: Hard-Light Productions, or who played the original 1999 3D space-shooter sim: Freespace 2 at some point or another.

Would-be Tech-room description:
“The NTF Bosch Beer Truck is the Neo-Terran Front's latest propaganda machine. Armed with the promise of a cool refreshing taste and the threat of planetary invasion, hundreds of NTF Bosch Beer Trucks was sent 300 years back in time through the Ross128 plothole by Admiral Aken H. Bosch to the old Earth city of [your city name here] as part of a plan to prevent the formation of the GTVA.”

Jokes aside, I made this as a test to learn how to use the asset editor. I had a boatload of fun making it, but I have other things going on so I don't think I will make another any time soon.