Store Page
ARK: Survival Evolved >  Workshop > 123's Workshop
This item has been removed from the community because it violates Steam Community & Content Guidelines. It is only visible to you. If you believe your item has been removed by mistake, please contact Steam Support.
This item is incompatible with ARK: Survival Evolved. Please see the instructions page for reasons why this item might not work within ARK: Survival Evolved.
Current visibility: Hidden
This item will only be visible to you, admins, and anyone marked as a creator.
Current visibility: Friends-only
This item will only be visible in searches to you, your friends, and admins. 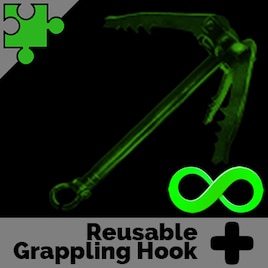 This item has been added to your Subscriptions. Some games will require you to relaunch them before the item will be downloaded.
Description
Reusable Grappling Hook is a modification for ARK Survival Evolved that adds a version of the grappling hook that never runs out of ammo. Because Batman.

PLEASE NOTE! This Mod has been superseded by Reusable Plus. This mod is no longer being actively supported/updated and is being provided as-is. Please subscribe to Reusable Plus by following this link:
http://steamcommunity.com/sharedfiles/filedetails/?id=693416678
If you only wish to use the Reusable Grappling Hook from the Reusable Plus mod then you can disable the other engrams using the instructions available here: http://steamcommunity.com/workshop/filedetails/discussion/693416678/358417008712853691/

Do you want to grapple up the steepest mountains? Effortlessly traverse the depths of TheIsland's caves? Or swing through the swamp like Tarzan bouncing from tree to tree? Then you've probably been frustrated by the expense and weight of carrying dozens of grappling hooks. That was, until now!

This modification adds an item called the Reusable Grappling Hook. This is an upgraded grappling hook that allows you to use each grappling hook more than once. Primary Fire to "Reel-In", Secondary Fire to "Reel-Out", Crouch to Detach, Jump + Reel-In to Vault-Jump! It requires you already know the Grappling Hook Engram, is fired from the Crossbow, weighs 10 (rather than 1), uses less of the crossbow's durability per shot compared to a normal grappling hook and can be crafted from within your player inventory. Plus you can use it as many times as you want - every time you use this ammo the Ark Gods put a brand new one back into your inventory. Otherwise the Reusable Grappling Hook is exactly the same as the regular Grappling Hook.

This mod is based on the mod originally created by @Splosions (Mod ID 622665004). This mod has been created with his permission and continued involvement but at a new Workshop ID (because Steam makes multiple people committing Workshop code difficult).

Cheat Codes
To spawn in this ammo you can use this code:

You will also need a crossbow, which can be spawned in with this code:

Join Us On Our Ark Server
If you want to experience this mod as we intended it then please join us on our Ark Server: Dreamtime PVP 4xXP 4xT 2xH 5xBreed +Events. We have this mod installed along with several of our other popular mods. New players and experienced players are both welcome. Join our growing community and talk with us when we're online.

If you are running this mod on a dedicated server you must specify this mod ModID as a commandline arguement GameModIds=633215081 or as ActiveMods=633215081 in GameUserSettings.ini. You only need to specify it as a commandline arguement -OR- in the ini file - not both :) If you have another mod running then use a comma to separate the mod numbers. This mod is fully stackable and does *NOT* need to be called first.

Izza Mar 7 @ 3:05am
This mod is not broken. S+ is not working. Craf the green hook(looks like the picture of the mod) and you are good to go. I would use two in inventory

Backlash Nov 9, 2020 @ 2:46am
Does this mod still work? The reusable plus version crashes the game