Greenlight > Games > himekigames's Workshop
Greenlight is being retired. For more information on how to submit games to steam, refer to this blog post.
This item has been removed from the community because it violates Steam Community & Content Guidelines. It is only visible to you. If you believe your item has been removed by mistake, please contact Steam Support.
This item is incompatible with Greenlight. Please see the instructions page for reasons why this item might not work within Greenlight.
Current visibility: Hidden
This item will only be visible to you, admins, and anyone marked as a creator.
Current visibility: Friends-only
This item will only be visible in searches to you, your friends, and admins.
An Oath to the Stars
Description Discussions0 Announcements1 Comments52 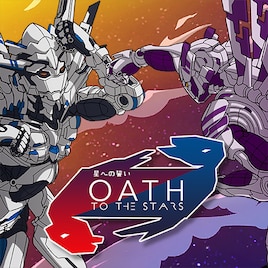 himekigames
Offline
See all 6 collections (some may be hidden)

View An Oath to the Stars in the store

I'm very excited and honoured to announce that An Oath to the Stars has been greenlit!

I cannot even begin to describe how excited we are for this milestone, and we're humbled to have received so many good comments and feedback from the community. They will help us make the game even better.

I'd love to thank everyone for your support and interest in our game, we promise it's going to be awesome!

Left for dead by her closest friend and comrade, Hoshiko is now looking for revenge.
Follow her in this modern hardcore danmaku SHMUP about revenge, friendship and honour.

The core mechanic of the game is the Distance Overdrive. Basically, your laser damage power is inversely proportional to the distance from the target. Which means, getting closer will grant faster kills, but put you in danger. Faster kills will then impact your momentum combo, multiplying your score if you can keep your streak of fast, close kills without dying.

In order to use your laser, you'll consume laser energy, which is released by enemies. Faster kills also grants additional laser energy, resulting in even longer combos.
< >
52 Comments

jammy20466 Mar 3, 2016 @ 4:00pm
Twitter: (Beth Bear Gaming) This game looks amazing! Massive fan of Shmups.. I would love to play it. It would be awesome if the game eventually came to consoles aswel! Would love to see it on the xbox one and ps4 in the future aswel as steam! :)

An Oath to the Stars has been Greenlit and is now listed in the Steam store. For the latest information, purchase options, and discussions for An Oath to the Stars, please see it on the Steam Store or in the Steam Community.
Visit Store Page
For more details Visit Community Hub
For latest discussions
If you really, really want to, you can continue to the Greenlight page. Information on this page may be out of date, since all the action has moved to the areas noted above.