Greenlight > Games > Ricky's Workshop
Greenlight is being retired. For more information on how to submit games to steam, refer to this blog post.
This item has been removed from the community because it violates Steam Community & Content Guidelines. It is only visible to you. If you believe your item has been removed by mistake, please contact Steam Support.
This item is incompatible with Greenlight. Please see the instructions page for reasons why this item might not work within Greenlight.
Current visibility: Hidden
This item will only be visible to you, admins, and anyone marked as a creator.
Current visibility: Friends-only
This item will only be visible in searches to you, your friends, and admins.
Mediocre Monster - The Life of an RPG Monster
Description Discussions0 Announcements2 Comments98 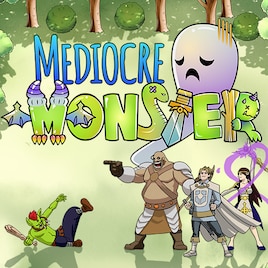 Now we can shift our focus on our ongoing Kickstarter. Our campaign is now sitting at 61% with only 11 days to go. Let's cross our fingers and make this game a success. For Gob, and all the other monsters that deserves justice!

Thanks a lot everyone!
Being greenlit is a huge accomplishment for us.
You are all awesome. :)

We got selected as the featured Games project on Kickstarter as well as a "Project We Love" by the staff! Help us out at Kickstarter![kck.st]

Read More
Description
Please back us on Kickstarter[kck.st]!

What is Mediocre Monster?
Imps. Goblins. Slimes. ♥♥♥♥♥♥♥ Mushrooms. These are a few of the first and weakest monsters you face in classic JRPGs like Final Fantasy, Dragon Quest, and Chrono Trigger. These monsters lead a depressing existence: walk around the forest, get slashed by a level 1 hero a few times, and disintegrate in an orange blur. Or so you think.

This is all in a day's work for the employees of "The Bestiary", the worldwide leader in random monster outsourcing. Employees go to the office each morning, get dressed, and go to work to pretend to die to heroes for their enjoyment.

Mediocre Monster puts you in the role of Gob, as he goes through everyday life working as a random monster. Follow Gob as he goes through a journey from being a lowly tutorial monster in the Tutorial Forest to being palette swapped into a well-respected monster who still dies to heroes easily, but after slightly more hits.

Story
Gob lives in The Grind, which has seen better days. It was once a thriving, developing town in the 1990s, its main industry being outsourced RPG monsters. Since then, many monsters have left the town for greener pastures as better opportunities arose in the Mobile and FPS districts.

Though some monsters who put up local businesses still chose to stay behind, the now near-abandoned town features very few random monsters and decrepit buildings.

Sometimes, however, cheap entertainment is more expensive than one would hope. Chief Pocajello, the village mayor, grew addicted to free-to-play games. As his addiction grew, his habit became anything but free. Village funds were used to purchase virtual gems. And soon the town was in dire financial trouble and was in danger of being repurposed into a casual city builder location.

Chief Pocajello had no choice but to pressure the town's main source of income, The Bestiary, to cover his debts, and save the town.

The Bestiary enlists Gob, a lowly tutorial monster, as its new random monster recruit in order to bolster its ranks.

Battle System
The battle system will definitely look familiar, as you've seen the interface countless times. It's a traditional, turn-based JRPG battle system. This time though, you'll be playing the other side.

When heroes face these regular monsters, they are oblivious to the amount of work and effort these monsters put in to give them a good experience (and experience points).

The goal of the monster is to eventually pretend to die as the hero strikes a killing blow. There are a lot of tasks to be done, however, before your HP reaches 0.

As seen in the trailer, Gob has several rules to follow in order to properly perform his tasks as a random monster. The taunt rule, for example, requires Gob to hit the taunter on his next attack.

As Gob rises up the ranks, and faces higher level heroes with higher level abilities, more complicated rules are introduced. These include preparing for taunts, dropping the correct items, reacting correctly to elemental weaknesses, and others.

Gob must perform all his tasks correctly and eventually give the heroes their satisfying victory.

Gob is then paid a weekly salary dependent on his job performance. As more mistakes are committed, more deductions are taken from his salary. Gob can then spend his money around town for training, skills, items, town upgrades, house improvements, and new buildings.

Eventually, Gob meets other monsters who he can join in work teams.

Progression
Career opportunities abound in the random monster industry! Promotions are in store for monsters who do their job right! Benefits for higher positions include higher pay grades, more exotic work locations (everyone's tired of the forest), new skills and equipment, wider range of clients, and even body transforming palette swaps!

As an RPG monster working in the forest, Gob's main task is to "level-up" heroes to prepare them for higher level areas. This entails giving them good battle experiences (and thus, "experience points") and dropping items that will help them in their adventures. Heroes also have a happiness score which is determined by battle satisfaction and fulfilling their wants. (These can include receiving rare loot, not getting hit, activating their limit break, and so on.)

Although monsters can face heroes from different parties and adventures, they are assigned a "main hero party" which they are especially responsible for.

Town Life
Work-life balance is very important in a random monster career. When Gob isn't busy facing heroes, he spends the rest of his day in town, where he can interact with fellow monsters.

Gob is also tasked by the mayor to help out in reviving the town. Gob can use his hard earned gold to improve the town aesthetics by improving roads, fences, and street lights and by constructing new buildings.

Gob can also invite new monsters to repopulate the town. Decisions are made on which monsters to recruit, which affects the town, and the industry as a whole. As more monsters move in, the town takes shape, which open up new opportunities and activities for Gob.

Improving the town is vital to saving it and keeping it afloat. Gob and the rest of the townsmonsters must work together to make sure that their town is not taken away from them.

Kickstarter
Wow thanks for reading all the way through (or scrolling down)! Please back us on Kickstarter[kck.st]!
< >
98 Comments

rsuave685 Nov 30, 2020 @ 10:17am
Is this still being developed? I noticed that the site isn't working anymore and the social media has not updated in a long time.

Well this is hillarious and deserve not only a support; people should know about this game.

ElectricDreamsDave Apr 10, 2016 @ 9:33am
Oh wow I was wondering what was happening with this. With such a catchy trailer and unquie premise it eailiy gets my vote
< >