Store Page
Arma 3 >  Workshop > Feint's Workshop
This item has been removed from the community because it violates Steam Community & Content Guidelines. It is only visible to you. If you believe your item has been removed by mistake, please contact Steam Support.
This item is incompatible with Arma 3. Please see the instructions page for reasons why this item might not work within Arma 3.
Current visibility: Hidden
This item will only be visible to you, admins, and anyone marked as a creator.
Current visibility: Friends-only
This item will only be visible in searches to you, your friends, and admins. 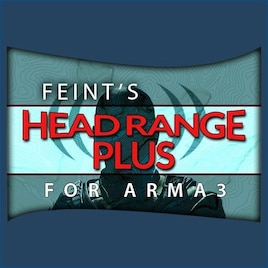 Feint
Online
See all 1047 collections created by Feint and other people (some may be hidden)
You need DLC to use this item.

This item has been added to your Subscriptions. Some games will require you to relaunch them before the item will be downloaded.
In 1 collection by Feint
FEINT'S ARMA 3 ADDONS & MODS

10 items
Description
This mod will increase the range of head motion that is possible in first person view while in airplanes, helicopters, VTOLs, boats, ships, subs, tanks and cars when using TrackIR. This includes adding the ability to move your view left/right, up/down and front/back when inside a vehicle (usually more movement is possible than Vanilla). This mod also changes the aiplane pilot FOV from 0.75 to 1.

IF YOU APPRECIATE THIS, BUY ME A BEER[www.paypal.com]

Features:
INSTRUCTIONS:
You will need TrackIR or similar.
1) Subscribe to this mod.
2) Activate it and start the game.
3) When in a vehicle, move your head around normally.

The old limitations on head movement should now be gone or much further away.

Credits:
Special thanks to kju for allowing me to modify his work originally created for Take On Helicopters.

Disclaimer:
Any unauthorized modification of the released files is not allowed without any written permission by the author(s).
You are using those files at your own risk.
Author(s) of those files are not liable for any damage or loss of data caused by using of those files.
Usage of those files is also prohibited for any commercial purposes.

SUPPORT THE ARTS:
Throughout history, art has only been able to survive and flourish through the generous donations of those who consume that art. I greatly appreciate your kind donations in support of my work. Your gift helps offset my immense costs such as licensed sound files, software subsciptions and most of all time and effort. Consider supporting artists like myself by Donating Now. To do so, click below:

IF YOU APPRECIATE THIS, BUY ME A BEER[www.paypal.com]
< >
177 Comments

teno11 Jul 13 @ 7:30pm
does that even work with no set? just normal camera?
or do i have to pay for 4 minutes of better gampleay

REDBowl Apr 4 @ 9:44am
i have to celebrate every victory man. so you know what? dont know ya or kju. dont know your politics or personal ups n downs. dont know your mistakes or your redemption. dont even know where you come from. you know what i do know? you guys fucking rock for making this mod in 2016 and you also more so for keeping it up ever since you made it.

i hope you all earned a lot of beers!

this one simple idea has brought quite a few amazing moments to the game play of ARMA3 users. way over 25,000 gamers have used it but over 14k gamers use it every time they play and record. this helped over the years by branching into millions seeing it in use in all kinds of different styles of arma vids. many who don't even own the game. seen it for myself.

from one human to another (and gamer alike), congratulations and thank you for the effort!
that's one heckuva an accomplishment. all the best.

SailorJerrys Mar 21 @ 4:41pm
@LCDC Make sure you have it enabled in the controllers in your controls, in game.

Hudson242 Feb 9 @ 8:07pm
Will this work with Tobii Eye Tracker, or do you know of a good alternative mod that is?

TheTimidShade Dec 19, 2021 @ 10:29pm
The Google Drive link for the server key doesn't work, requires access
Any chance you could add it to the mod files?