Greenlight > Games > Del_Duio's Workshop
Greenlight is being retired. For more information on how to submit games to steam, refer to this blog post.
This item has been removed from the community because it violates Steam Community & Content Guidelines. It is only visible to you. If you believe your item has been removed by mistake, please contact Steam Support.
This item is incompatible with Greenlight. Please see the instructions page for reasons why this item might not work within Greenlight.
Current visibility: Hidden
This item will only be visible to you, admins, and anyone marked as a creator.
Current visibility: Friends-only
This item will only be visible in searches to you, your friends, and admins.
Just a Cleric
Description Discussions0 Announcements16 Comments72 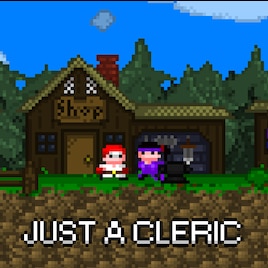 Del_Duio
Offline
See all 4 collections (some may be hidden)

View Just a Cleric in the store

Well WOW this was a great surprise this morning! Thanks to everybody who voted to help JAC get up here, a game that has flourished since I first put it up in February. Even through the assistance of our very own Steam community we were able to come up with additions like the Super Boss. And now, not long from now, you guys will be able to fight him for yourselves!

Now I'm going to try to figure out trading cards and achievements and see if I can add those as well.

This video shows all its powers except the healing, of which it can do up to 2 times max. This demon is the ultimate evil in "Just a Cleric", and is in fact many times stronger than the normal end game boss. It's not meant to be taken lightly- or taken on at all until you've gone through the game at LEAST once and collected some fine equipment built your gear up through upgrades.

This entire fight, song, mission... everything was started and finished in the time JAC has been on greenlight up here at ye olde Steam. I take my stay here as a blessing, as this boss- as well as all the other things I've been able to do during this time as well- makes this game SO SO much better than it was before.

"Just a Cleric" is my new retro-styled action RPG. Become the titular wussy cleric himself and set out to avenge your fallen comrades by attempting to do what no cleric before you has ever done: CLERIC DE COMMANDO.

My answer is simple: Can you play a quadrillion retro action RPGs?
Of course, this isn't some weird sorta' jail!

But can you play a quadrillion games like MINE? Hells no!! And here's why:

To your average Joe you'll see:

*Retro pixel graphics. (Well, at least he drew his own and didn't use Realm of the Mad God's graphics!)

*Hub / town level -> Missions -> Get gear & rewards -> upgrade and buy stuff at the town -> repeat game progression. (MEH, you might say, but hey at least games like that are pretty fun.)

*4 standard stats that you can boost however you see fit. (Oh boy, and I'll bet 3 of them suck!)

*Many (many) different types of gear to find and upgrade. Normal upgrades go to +4, and then you can bless those +4 pieces at the church in exchange for money to get the best of the best. (Well I DO like Diablo...)

*NG+ where a better loot pool opens up, new status ailments, enemies & enemy placement, and tougher bosses that gain additional abilities. That's one of the reasons why I think you NEED the whole game as the NG+ portion holds some real challenge and of course better gear! (New Game plus?? Adds to replay value if nothing else, hmm..)


And to the AWESOME and MOST-EXCELLENT observer, you'll also see:

*Well-written dialogue (some of the writing is smart comedy IMO, even if it isn't going to win any awards lol) I can't tell you how many times I've played some AAA title and the story is just BORING AS ALL HELL. Damn, all those millions to make a game and nobody thought to hire a real writer? With JAC, I try to take what's a simple premise and make it interesting where I can.

*Different music. I love chip tunes. I love making computerized music for games and have done so lots in the past. This time though, I wanted to try something different and put my other hobby to use which is playing / writing music. So with JAC, you'll get an OST full of guitars, bass, drums, and quasi-terrible singing. (Also I don't think anybody has used a rubber ducky in their game's soundtrack before now).

*A hero who's a cleric. Aside from maybe an MMORPG and the old Hexen 64 game I can't think of any game that stars a cleric exclusively. Also it was a cool thing to be able to have access to prayers that you don't normally see in any action RPG like Raise Dead.

*A game that has 4 standard stats however none of them suck! I know for me I hate playing some games where your character has 8 stats and 3 or 4 of them are trash nobody ever levels up. Because I personally hate when games do this, I CHANGED THE WAY WE'RE GOING TO FRIGGIN' DO THIS. In JAC, I made a special point so that each stat is immediately useful to the player in more than one way. You're welcome!

*ENCUMBRANCE MAKES A TRIUMPHANT RETURN! Haha! When I used to play the old SSI D&D Goldbox games I remember that your gear load used to make you heavier and heavier and in turn you couldn't move as many squares on the battle map. Since you can't really do this in a platformer, I've come up with an interesting idea where your gear load determines how much damage you'll take from a big fall. It's equal to half of your total gear load. If you have <1 weight you'll take no damage at all. Also interesting to note is that when under the effect of the Ironskin prayer your gear load is increased. This was done because it A) makes sense and B) Ironskin is really really powerful with high FAITH.

*A funny intro and ending scene. You'll see! YOU'LL ALL SEEEEeeeeeee!!!!! (falls off a cliff)

But it's the best game ever made by a bass playin' weirdo I'll bet!

Here's the store page, and thanks for all your patience but it won't be long now!
http://store.steampowered.com/app/467330/

Del_Duio  [author] Apr 28, 2016 @ 11:42am
Thanks Milouze, I will not lie to you guys as I have zero idea how anything works past this point but I will promise to try my best! I haven't had time to look into anything at all yet as I really did just learn about this on the way to work this morning. Tonight's gonna' be busy!

@ vdweller: Yeah I know, right??! Was a total surprise to me. I was still kind of far from the top 100 so somebody important on the judging team must've thought it was good for Steam. Either that or the guys at Rock Paper Shotgun got sick of my emails and wanted me to stop sending them lol.

Milouze Apr 28, 2016 @ 10:21am
Well done and thank you for the detailed response. I will definitely get the game when available from the store

It already has full controller support in fact that's how I play it myself. Though I've never had anything up on Steam before I do plan on trying to figure out some achievements for it too. Maybe one for beating each big boss, winning the game, defeating super boss, swapping an item out on the squirrel stump and more. If I can figure it out there's many aspects of the game that could have an achievement to it.

Trading cards (I think) are unlocked due to play time so those should be easy enough too. The game keeps track of your playthrough's time however the Steam client would be more accurate as it would also include restarts and game overs. I'm not sure how to get it to cloud save but I can look into it. For now there's 3 save files that are stored locally inside a subfolder next to the .exe.

Milouze Apr 26, 2016 @ 5:58am
Hope it gets through, voted !
Hoping for full controller support, achievements (no speedrun related ones), trading cards and cloud saving as well

Just a Cleric has been Greenlit and is now listed in the Steam store. For the latest information, purchase options, and discussions for Just a Cleric, please see it on the Steam Store or in the Steam Community.
Visit Store Page
For more details Visit Community Hub
For latest discussions
If you really, really want to, you can continue to the Greenlight page. Information on this page may be out of date, since all the action has moved to the areas noted above.