Store Page
Space Engineers>  Workshop > alex-thatradarguy's Workshop
This item has been removed from the community because it violates Steam Community & Content Guidelines. It is only visible to you. If you believe your item has been removed by mistake, please contact Steam Support.
This item is incompatible with Space Engineers. Please see the instructions page for reasons why this item might not work within Space Engineers.
Current visibility: Hidden
This item will only be visible to you, admins, and anyone marked as a creator.
Current visibility: Friends-only
This item will only be visible in searches to you, your friends, and admins. 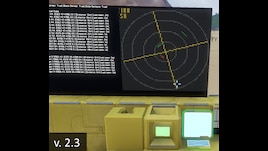 alex-thatradarguy
Offline
See all 548 collections (some may be hidden)

IMPORTANT!
If you get an error saying "Caught exception during execution of script:Common language Runtime detected an invalid program.", it means you have an old version of .NET framework, and you need to upgrade.

How does it work?
Sensors has a function called LastDetectedEntity, and you can do GetPosition() on that to get 3d coordinates. Comparing the radar's coordinates with the target's coordinates we get the distance. Knowing the angle of the rotor and the distance to the target we can apply simple trigonometry to imagine a triangle, and get 2D x and y coordinates to plot on the radar screen.

The Remote Control block has an autopilot feature, which has a function to detect obstacles called GetFreeDestination(). We can use that function to get the distance to the obstacle. Unlike sensors, we can tell the Remote Control block which direction to look at, so we don't need an actual rotor, we can simulate one in the code. We then apply the same basic trigonometry to get 2D x and y coordinates.

Instructions - Simple Rotorless Mode:
- Place a power source, a Timer, a Programmable Block, a Remote Control block, and a Text Panel
- Edit the programmable block, Browse workshop and find this script in the list, "ok", "Remember & Exit"
- Rename the Remote Control Block so it contains "RADAR"
- Rename the LCD / Text panel so it contains "RADAR DISPLAY" (you can have more than one)
- Setup Actions in the Timer Block like this:
-> add the Programmable Block
-> add the Timer Block itself and set it to "Trigger Now"
- Trigger the Timer Block with "Trigger Now"

Instructions - Combined Scanning Mode, Remote Control + 1 Sensor:
- Do everything in Rotorless mode
- Add one Rotor
- Place a block on the rotor
- Rename the rotor so it contains "RADAR"
- Place a sensor on the forward facing side of the block on the rotor
- Rename the sensor so it contains "RADAR FRONT"
- Recompile the script by editing and pressing "Remember & Exit"
- Trigger the Timer

Instructions for extra GPS Stats Display
- Follow instructions for any scanning mode
- Add an LCD / Text panel, rename it so it contains "RADAR STATS" (you can have more than one)
- Recompile the script by editing and pressing "Remember & Exit"
- Trigger the Timer

Need-to-know stuff and limitations:
- The remote control block is capable of detecting obstacles hundreds of kilometers away, but the detection rate is limited by the speed of the scan rotation, and by how many times the script is running per second. The actual max scanning range is unknown at this point, but it should be able to scan several kilometers.
- The remote control block is very touchy about grid placement, many different blocks prevents it from scanning at all.
- The remote control block scans in a very flat circle around you, so you need to be horizontally aligned with your targets to detect them.
- Targets detected with Remote Control and targets detected with Sensors will show up at the same time with different colors.
- The screen will scale the ratio automatically depending on the range settings.
- If a red target is displayed next to a green target, it doesn't necessarily mean that they are next to each other in the game, because where they are placed on the screen depends on the individual separate range settings of the remote control and sensors.
- Increased resolution = more calculations = bigger FPS cost
- Increase refresh rate = more calculations per second = bigger FPS cost

This script can't work and never will work again, so there's no need for this author to return. Keen removed the API function it relies on over a year ago (it was OP and shouldn't have even been accessible anyway). Try other authors who are using camera blocks and radar mods posted within the past year.