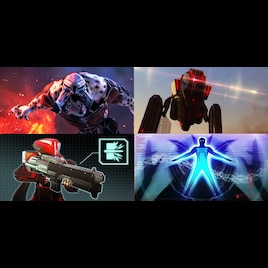 65 items
Description
Latest Update
Avenger Watch no longer spawns UFOs that will always intercept the Avenger, just ones that have a chance of doing so. Also fixed UFOs spawning from actions not meant to trigger it, like detecting missions in LW2.

ADVENT's gotten tired of XCOM spontaneously developing new and even more dangerous abilities and have been working on new plans to counteract XCOM's advances.

Dark Events Descriptions:
Avenger Watch: Every mission has a 50/50 chance of spawning a UFO to try hunting down the Avenger.

Alien Worm: Intel is halved, and medical, psionic, and proving grounds equipment are much less efficient at doing their jobs.

Advanced UFO Hunter: Like the Hunt XCOM event except it's guaranteed to hit if it activates.

EOD Armors - Provides the Blast Padding perk to some ADVENT soldiers, providing them with a point of armour and 66% damage reduction against explosive damage. Will probably cause very inconvenient situations if you have the Grenade Damage Falloff mod installed.

Lightning Drugs - ADVENT tries out experimental drug therapies on its own soldiers. On the few that it'll work, they'll gain lightning fast reflexes. As in they get the Lightning Reflexes perk. Will probably cause lots of anguish when RNGesus decides to give Lightning Reflexes to a stun lancer.

Holo-targeting Rounds - Modified smart rounds that function like the holo-targeting perk. Will definitely cause anguish if you let an officer do their marking thing in addition to this.

Special Forces Surge - ADVENT integrates spec op units into its main field operations, making XCOM face some units who have similar abilities to them. On its own the added abilties aren't too bad, but if you end up letting it combo with some dark events, this could cause some serious damage to your operations.

Hazmat Armour and Mindshielding Dark Events! ADVENT now has the chance of becoming immune to your war crime grenades and ammo, and they along with the aliens can now roll out their variant of Mindshields against your psi-ops and flashbangs.

Three Month Dark Events! These only have a chance of being in play when you've hit the maximum number of facilities that can exist, but they have a very high chance of being added compared to regular dark events when they can be added.

These currently include the terror units (Faceless, Berserkers, and Chryssalids), along with an Avatars on missions varaiation Dark Event.

Variations of the Viper Rounds event, including all the other rounds in the game. Now ADVENT can potentially set your troops on fire, crit far harder, pierce your EXO/WAR suits' armour, and just have better aim overall.

Overwhelming Force, adding in multi-sectopod pods on missions when active.

Berserker Packs! Like the Faceless and Chryssalids, these can now be deployed on non-retailation missions once you encounter these units for the first time. Come in packs of 4 when deployed.

Riot Control! Realizing how much XCOM seems to detest these units, ADVENT may decide to start forming additional squads comprised of almost nothing *but* stun lancers and deploy them in operations they believe XCOM may try interfering in. And then you realize they've decided to add a shieldbearer among them.

Early Avatar Deployment! Been delaying the strategy side of things for a while? Maybe let things go all the way towards...I dunno, September or so?

While your efforts will always prevent mass production of what the Avatar Project is aiming for, low rate initial production is still a thing, and eventually they will start considering to push that side of things to combat deployments if XCOM's lasted long enough without going down. You probably shouldn't let this one go through if it ends up popping up.

Not included:
High Alert. This event is from True Concealment, you need to check that mod's page to see how to turn it off.

Extends X2StrategyElement_DefaultDarkEvents and X2HackReward, overrides XComGameState_UFO for Advanced UFO Hunter. Also makes major modifications to XComMissions.ini to the MissionSchedules side of thing, is very likely to not work with mods that also alter that part of the .ini.

Has an adjustable .ini called XComDarkEvents.ini. Located at (wherever XCOM 2 is installed)\steamapps\workshop\content\268500\626109271\Config

Issues
I seem to be crashing after an update - clear out your config folder in My Games/XCOM2/XcomGame/Config, sometimes XCOM 2 doesn't properly change configuration files after a mod that needs to alter them updates and results in games being unstable until you force it.

Thanks to S. Flo for making the custom dark event images!

Thanks to thunderbeast for making the Korean localization!

Thanks to Klavi for making the Russian localization!

Thanks to MantLemon for making the Chinese localization!
Popular Discussions View All (3)

afterthought.btw Jul 27 @ 5:34am
Hmm, this mod appears to be at least partly the cause of a crash I was getting. Game crashed to desktop with no warning at a certain point on geoscape. Managed to identify this mod as the root of the problem by bifurcating my absurd number of mods until the crash wasn't repeated. Took this out of the mod list and crash went away. Happened when the Advanced UFO Hunter event was due to spawn.

May potentially be related to one of my other many mods, although the advanced mod launcher gave the list the all clear. Not sure what else I can do to narrow down the problem - can try if you'd like.

陆战型皮皮虾 Feb 10 @ 5:20am
the UFO watch event cause my game crashing.... after finishing a mission with this dark event exists,the game crashes while loading the mission completed board

Thaleras Jan 22 @ 5:25pm
It appears that this mod is the source of a crashing bug I was having where the game would CTD every time I tried to load to sky ranger after mission end. Funny thing is I manged to go through 30 odd missions in this campaign before it crept up. Had to incrementally go through each mod to find the problem. No idea why, was a supply raid.