Greenlight > Games > Pentacle's Workshop
Greenlight is being retired. For more information on how to submit games to steam, refer to this blog post.
This item has been removed from the community because it violates Steam Community & Content Guidelines. It is only visible to you. If you believe your item has been removed by mistake, please contact Steam Support.
This item is incompatible with Greenlight. Please see the instructions page for reasons why this item might not work within Greenlight.
Current visibility: Hidden
This item will only be visible to you, admins, and anyone marked as a creator.
Current visibility: Friends-only
This item will only be visible in searches to you, your friends, and admins.
The Works of Mercy
Description Discussions4 Announcements3 Comments360 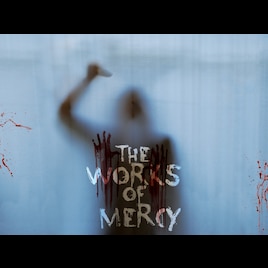 Pentacle
Offline
See all 53 collections (some may be hidden)

View The Works of Mercy in the store

'The Works Of Mercy' Coming to Steam on 7th of June.
STEAM: https://store.steampowered.com/app/523640
NEW TRAILER: https://youtu.be/3ePC2CRvv6c

Read More
Description
“The Works of Mercy” is a psychological thriller inspired by the classics of the genre: Roman Polanski’s “Repulsion,” “The Tenant” and Stanley Kubrick’s “The Shining.” The game’s plot revolves around mysterious killings committed on seemingly random victims. Only this time it’s the player who becomes the murderer.


“The Works of Mercy” tells a story of a personal tragedy and wrecked psyche. When a cryptic tormentor forces the protagonist to kill people in order to save his family, the game’s hero (and the player) is posed with a series of dramatic questions. Who is the tormentor? Why is he so vengeful toward the protagonist’s family? How far do you have to go to satisfy him? How can you justify the killing in the sake of saving someone’s life? And how will you cope with the sense of guilt?

“The Works of Mercy” takes place in a photorealistic world as immersive as the real one. It lets the player get the very feel of roaming through murky locations and delve into the hero’s mind which is put to a serious trial. The game enables you to explore a fully interactive environment featuring the best elements of such games as “Gone Home” or “P.T.”

“The Works of Mercy” will leave the gamers with a lasting impression and face them with the question: how much could I sacrifice for my family? It will take the players through a dark world which gradually dissolves to an increasingly surreal vision of the protagonist’s mind captured in a lethal trap.

“The Works of Mercy” will be made available in English, French, German, Spanish, Japanese, Italian, Polish, Russian and Portuguese.The current plan is to complete the PC version of the game. The team will then move over to the Mac / Linux ports and console adaptations.
We also plan to support all major VR headsets.

Still want to contribute to the game.
ari

The Works of Mercy has been Greenlit and is now listed in the Steam store. For the latest information, purchase options, and discussions for The Works of Mercy, please see it on the Steam Store or in the Steam Community.
Visit Store Page
For more details Visit Community Hub
For latest discussions
If you really, really want to, you can continue to the Greenlight page. Information on this page may be out of date, since all the action has moved to the areas noted above.