Store Page
Reassembly>  Workshop > Conga's Workshop
This item has been removed from the community because it violates Steam Community & Content Guidelines. It is only visible to you. If you believe your item has been removed by mistake, please contact Steam Support.
This item is incompatible with Reassembly. Please see the instructions page for reasons why this item might not work within Reassembly.
Current visibility: Hidden
This item will only be visible to you, admins, and anyone marked as a creator.
Current visibility: Friends-only
This item will only be visible in searches to you, your friends, and admins. 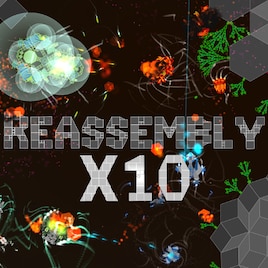 Conga
Offline
See all 15 collections (some may be hidden)

This item has been added to your Subscriptions. Some games will require you to relaunch them before the item will be downloaded.
Description
[Notice]
Due to all the changes over the years, I will be releasing a new version in the following days to be up to date with the current game and perhaps i'll balance it out a little, give it a bit more consistency~
Until then, the most recent update removes the turret limitation put on obliterates, not like they were of any use anyways but nostalgia fights back~
Enjoy the show

Reassembly is a pretty fun game, right~?
You can make a lot of stupid things happen with spinners, 100,000P and probably even swarms.
However one day you probably get really bored and want something new, something stupider you've never seen before~

On a day like that I came up with the idea, inspired from TF2x10, Reassembly x10~
This mod does what it says on the cover, it multiplies everything by 10~

Enjoy stupid knockback, overly long numbers you can't read, a screen filled with so many projectiles you can't even see what's going on other than the colour white, 1 fps due to how many drones you put on that one faction 4 ship, different P values because of a lazy developer, really slow projectiles you have 10 minutes to avoid along with dying to a really small ship and much much more new generation stuffs~

It took me three days, one of them no breaks to put this all together in fully working, non-laggy and overly stupid condition.

Also if you get 1,300 something errors, just ignore them~~
That's just the game being stupid~

You can get it here: https://www.dropbox.com/s/fpurxdqp79cx9ee/Reassembly-X10-ByConga.7z?dl=0

just looking at the effects of this mod, it seems like the tempest is beyond op.