Greenlight > Games > Ghost Town Games's Workshop
Greenlight is being retired. For more information on how to submit games to steam, refer to this blog post.
This item has been removed from the community because it violates Steam Community & Content Guidelines. It is only visible to you. If you believe your item has been removed by mistake, please contact Steam Support.
This item is incompatible with Greenlight. Please see the instructions page for reasons why this item might not work within Greenlight.
Current visibility: Hidden
This item will only be visible to you, admins, and anyone marked as a creator.
Current visibility: Friends-only
This item will only be visible in searches to you, your friends, and admins.
Overcooked
Description Discussions8 Announcements2 Comments436 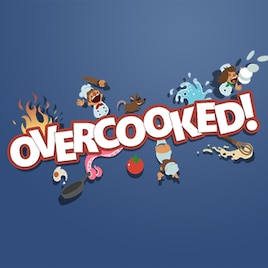 View Overcooked in the store

Just wanted to say a big thank you for everyone who voted for Overcooked on Greenlight!

You can now head on over to our shiny new store page if you'd like to add Overcooked to your wishlist:

We don't have a release date or a price point for the game yet, but we'll be sure to let everyone know when we do : ) Once again a big thank you. If you have any questions or feedback on the game head over to our discussions page:

Just a quick announcement to let you know about some of the new features that have been going into Overcooked this week:

- Share-a-pad functionality is now in and working, meaning 2 players can now share a single pad if they wish, this also means that any one-handed players can now also enjoy the game too. Need to be polished up a little but here's how it looks:

- New Hell's Kitchen levels have now gone into the game, including this carousel kitchen:

- You can also watch the guys over at Eurogamer playing an early build of the game on YouTube:

Thanks so much for all the support and the kind comments so far, please favourite and follow if you like what you see and tell your friends to vote for us : )

Overcooked is a chaotic co-operative cooking for 1-4 players.

Working as a team, you and your fellow chefs must prepare, cook and serve up a variety of tasty orders before the baying customers storm out in a huff.

Take part in an epic journey across the Onion Kingdom and tackle an increasingly challenging and bizarre gauntlet of kitchens which will push your skills of co-operation and co-ordination to the very limits.

Grab some friends and engage in a co-operative adventure like no other.

Teamwork is absolutely essential, as the orders pile in you'll need to co-ordinate your team to stay on top of the action. Divide the kitchen tasks between yourselves while you strive to avoid the various obstacles and traps the level throws at you.

You'll scream, you'll bicker, you'll gesticulate wildly as you try to keep your team from buckling under the pressure.

Unlock new characters and new competitive levels as you make your way through the game. Go head-to-head in one of the many competitive kitchen scenarios. 1v1 and 2v2 multiplayer levels are available allowing you and your friends to compete to see which team is the most co-ordinated

Prefer to go it alone? Overcooked's campaign can be experienced by solo players too!

Take control of 2 chefs as you tackle each kitchen environment: leave one chopping while you swap to another to check on the stove, leave one to wash the dishes while another deals with the rat infestation - It's singleplayer co-operation at its very best : )

Low on gamepads? You and a friend can share one half of a single pad to control 2 different chefs.
Literally rub shoulders with your team mates as you take on the world's deadliest kitchens.

🥛 SedSkeletony🥛 Aug 3, 2016 @ 9:17am
can i play with other friends who are in the same room on seperate computers, i dont really get it xd

IntoTheThermosphere Jul 20, 2016 @ 3:48pm
And i will only be around for today and tomorrow
got a vacation plan

IntoTheThermosphere Jul 20, 2016 @ 3:47pm
I am a new YouTuber named hexNvex
I would like to get a YouTube beta and record this to YouTube for my first episodes...
So if you would think about it that would be an honor

Ghost Town Games  [author] Mar 8, 2016 @ 2:39am
Thanks for all the support everyone, really appreciate all the help! Now that we're Greenlit we have a shiny new store page. So head on over if you'd like to add Overcooked to your wishlist:
http://store.steampowered.com/app/448510/

or join in the discussions!:
http://steamcommunity.com/app/448510/discussions/

Overcooked has been Greenlit and is now listed in the Steam store. For the latest information, purchase options, and discussions for Overcooked, please see it on the Steam Store or in the Steam Community.
Visit Store Page
For more details Visit Community Hub
For latest discussions
If you really, really want to, you can continue to the Greenlight page. Information on this page may be out of date, since all the action has moved to the areas noted above.