GameMaker: Studio>  Workshop > Willburb's Workshop
This item has been removed from the community because it violates Steam Community & Content Guidelines. It is only visible to you. If you believe your item has been removed by mistake, please contact Steam Support.
This item is incompatible with GameMaker: Studio. Please see the instructions page for reasons why this item might not work within GameMaker: Studio.
Current visibility: Hidden
This item will only be visible to you, admins, and anyone marked as a creator.
Current visibility: Friends-only
This item will only be visible in searches to you, your friends, and admins. 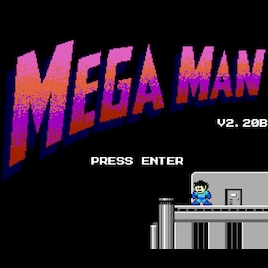 Schmiddi
Offline
See all 20 collections (some may be hidden)

This item has been added to your Subscriptions. Some games will require you to relaunch them before the item will be downloaded.
Description
"Break the death-grip of the ultimate computer! Legions of once peaceful robots have been mysteriously transformed into a horde of humanity-hating berserk droids! Nobody is safe - least of all Mega Man. Armed with every android-annihilator ever invented, they're determined to reduce the super-powered cyborg into a heap of radioactive waste!

Can our hero outfight, outwit and "out-robot" the robots? Will Mega Man pulverize the powerful robot-maniacs? Or will he melt down?"


NOTICE - A recent update to gamemaker's workshop player appears to have broken this. I will attempt to get an update done soon to address this. Otherwise the downloadable versions in the description still work fine


Originally presented by Rozner Labs in 1990 and 1992 as Megaman and Megaman3 for dos. These games have since gone down in Megaman history as some of the worst entries in the series. With many not even knowing of their existence. The few who received a floppy disk instead of a cartridge for Christmas many years ago were greeted with unfair levels, plain bosses, and silent gameplay! Be it from lack of care, or maybe lack of ability. These games were bad, but every game can have a second chance right?

Two years of work have culminated in a full remake of these two games into one large project. A full remake of every stage in classic series nes gameplay! All 9 robot masters! Megaman X style level changes with alternate paths based on bosses defeated! Hidden bosses and secrets! A fully built fortress featuring new challenges instead of retreading the known hazards of the robot master stages! And finally, a fully built level editor. with built in time attack and challenge mode, and custom boss AI planner. Allowing you to make your own Megaman stages and bosses come to life to challenge your friends and community!


Thank you to everyone who put their time into making this remake a reality!

A specific thankyou to Schmidkalkan for the art added in update 2.20!

NOTICE
Please, please, PLEASE give crash logs if they happen. It's impossible for me as a single person to catch everything that can happen. Something as small as a single letter could render the game unplayable for days, and due to how gamemaker stores certain things like config files, and them being shared between ALL versions of the executable. I can be completely oblivious to it. As the crashes could ONLY happen to new players. PLEASE report crashes if they happen.
Popular Discussions View All (8)

Willburb  [author] Jun 17, 2018 @ 5:05am
I don't quite have the original files, at least from what I can find. I've been through a few harddrive crashes now, and I tend to focus on only keeping the more updated files around them old versions. There IS a review/letsplay though that inspired me to remake it over the course of a year for 2.0 https://www.youtube.com/watch?v=NO_cTl7hHlk

Finale Jun 16, 2018 @ 10:31pm
I want to comare this against the 1.0 version to see how you've adjusted some aspects of the design- do you happen to still have the original version lingering around somewhere that I could snag a copy?

Willburb  [author] Oct 27, 2017 @ 1:40pm
The downloadable version in the description appears to still work. I'll look into the subscribable player version. It's crashing on my end, but I've not done any uploads in a long time. Yoyo recently ended their support of GM player/their own webstose as well. This may be related. I will put a notice in the description.

HTV04 Oct 27, 2017 @ 12:14pm
I subscribed to this, but after I did, Game Maker Studio kept crashing upon launch. I unsubscribed from this game, and the problem was fixed. Any way to fix this? I really want to play this game. Thanks!