Store Page
XCOM 2>  Workshop > Paradox Song's Workshop
This item has been removed from the community because it violates Steam Community & Content Guidelines. It is only visible to you. If you believe your item has been removed by mistake, please contact Steam Support.
This item is incompatible with XCOM 2. Please see the instructions page for reasons why this item might not work within XCOM 2.
Current visibility: Hidden
This item will only be visible to you, admins, and anyone marked as a creator.
Current visibility: Friends-only
This item will only be visible in searches to you, your friends, and admins. 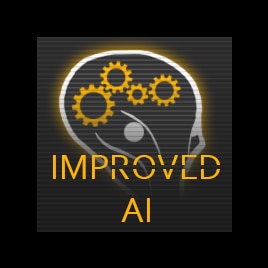 See all 480 collections (some may be hidden)

This item has been added to your Subscriptions. Some games will require you to relaunch them before the item will be downloaded.
Description
NOT COMPATIBLE WITH LONG WAR 2.

-The range at which AI will attempt to engage you in combat has been reworked,

-ADVENT act in more of a support/defense role, staying further away and making it harder for you to murder them with shotguns.

-More AI will fight you at once, depending on difficulty (Still unlimited on Legendary)

-The AI will entrench instead of running through your overwatches all the time, as silly as that was.

-If your hiding on a roof or similarly out of reach and stunlancers can't reach you, they'll try throwing a grenade.

-The AI now considers grenades against single targets (Except ADVENT troopers, that was way too mean.)

-Beaglerushing is now countered by the scampering AI much, much better

-The AI will now scamper away from you unless it has something to gain by getting closer (MECS, for instance)

-Sectoids now use Mindspin instead of Reanimate, which leads towards Mind Control if it suceeds. Mind Shields are now a serious consideration.

-The AI will now attempt to murder you through an overwhelming amount of potshots.

-The AI now only uses overwatch when it's in a deeper level of despair about its aim than you.

-Made ADVENT captains try and shoot you before trying to Mark Target you after moving/flanking.

-Screw you meme beacons, not everybody is as dumb as bricks.. so pretty much just robots and captains have figured it out.

-ADVENT Captains should now treat mimic beacons as normal soldiers, instead of going ham-over-fist to murder them.

-Changed Panic AI to try not to die as much. Thanks, Real Panic mod by ADVENT for allowing me to incorporate the changes.

-As well as MEC's, Andromedons in the robotic phase, Codexs, and Gatekeepers. + Faceless since they practically ignored them anyways. They will still attack them when they think it's their best option.

-I have been unable to test how the AI responds to these changes in the later levels, so let me know if codexs/gate keepers are not behaving correctly.

-This mod recommends Turn Timer Tweaks as the AI will attempt to stall you for time, or the True Concealment mod without timer changes, or both, if you want.

Improved AI Edits these .ini's:
Essential:XComAI.ini (If this is edited by any other mods it will NOT work)
Not essential, but nessecary for more core features such as AI engagement range and so forth are below
XcomGameData_WeaponData.ini, XComGameCore.ini, XComGameData.ini
Modified (Extended) classes:XGAIBehavior.uc, XcomGameState(x4) AIGroup,AIPlayerData,AIReinforcementSpawner,AiUnitData and SeqAct_AIJobUpdate. The .uc's were modified using the extends command.

IMPORTANT COMPATABILITY STUFF: Long War Studio's mods must be disabled and re-enabled after launching with my mod, otherwise my mod may not function. LWS' stuff IS compatible afterwords, for they overwrite no lines of mine, but the extension of the ai.ini they do will render my mod non-functioning.

With this mod don't be afraid from dropping down a difficulty level. The game can be much harder than before, depending on how much of a crutch your tactics are to you, I tried to break all of them.

Improved AI is always a work-in-progress, and I'm open to suggestions!

Let me know if version 1.47 causes any units to just break in combat, debugging testing only goes a short ways, unfortunately.

Tl; DR: The AI felt like it was pulling its punches. I told it to stop pulling it's punches, but no kicking below the belt. I have morals, honest. I did not change the gear of any AI unit, so if some unit is using an ability you haven't seen before, it's just working properly now.
< >
369 Comments

Paradox Song  [author] Sep 14, 2017 @ 12:38pm
@MantLemon DerBK's A Better AI implements a lot of changes like my own, and his is updated to WOTC, so, I'm going to keep mine vanilla to support anyone who hasn't yet grabbed it. Those who do can saunter over to DerBK's mod. There's a couple differences, for sure, mostly with how MEC's and melee units behave, but, nothing alien to you.

Paradox Song  [author] Sep 3, 2017 @ 7:50am
@Pink Floyd That's correct, there are zero content changes to the mod. It only uses tools and resources already present with enemies. There was an artifical limitation on the number of activated units that would fight you, which has been drastically changed to allow more hectic combat.

Lord Trooper Aug 9, 2017 @ 1:20pm
By this "More AI will fight you at once, depending on difficulty (Still unlimited on Legendary) " do you mean the mod adds more enemies, or more of them just attack you at once. Becuase I just want smarter Ai, not more enemies, that why I stopped using Better Advent 2. So this juste dits Ai right?

Bullyhunter77 Apr 7, 2017 @ 4:27pm
I'm wayy too dumb to understand the changed ini files, so can anyone do me a favor for my rather limited sized brain and give me a quick list of notable mods that are incompatible? Maybe? Anyone?

Paradox Song  [author] Feb 19, 2017 @ 4:08am
@FateWeaver It is still possible for them to use Reanimate, but they heavily favor Mindspin as it often disables a unit, versus reanimating a new one that is destroyed if the Sectoid dies or is disoriented.

So Paradox Song, if you are reading this, I would really appreciate an optional version that still has reanimate, if at all possible.

Thanks in advance, if you decide to do that. Also your mod seems really cool. ^^
< >