Store Page
Dota 2>  Workshop > AvalonStudioOfficial's Workshop
This item has been removed from the community because it violates Steam Community & Content Guidelines. It is only visible to you. If you believe your item has been removed by mistake, please contact Steam Support.
This item is incompatible with Dota 2. Please see the instructions page for reasons why this item might not work within Dota 2.
Current visibility: Hidden
This item will only be visible to you, admins, and anyone marked as a creator.
Current visibility: Friends-only
This item will only be visible in searches to you, your friends, and admins. 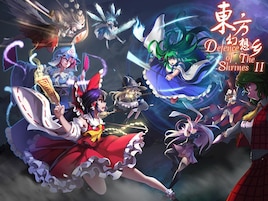 AvalonStudioOfficial
Offline
See all 61 collections (some may be hidden)

This item has been added to your Subscriptions. Some games will require you to relaunch them before the item will be downloaded.
Description
Gensokyo is the only sacred land left for humans, yōkai, spirits and Gods.

As the girl protagonist you live and strive in this magical realm,

However, thing's are not as calm as they seem.

Faith is the force of life and existence,

and through warfare we fight for this Faith.

In the name of faith, even Gensokyo cannot escape the inevitable war thats about to begin ...

Touhou Defence of The Shrines 2 is a Team PvP game based on Touhou Project
where Touhou characters pit against each other on a similar gameplay mechanics
from Valve's very own Dota 2.

Each team has to destroy the opponents' Shrine, either guarded by Genjii's Sons for the Hakurei side, or Onbashira Towers for the Moriya side at opposing corners of the map.

This custom game map is the "Sequel" to its predecessor, Defence of The Shrines, which was originally developed as a game for Warcraft III.

Currently, the game is in alpha and offers 27 Touhou girls as playable. Alpha versions are known to be experimental and unstable releases and therefore discretion is requested when playing this game. Crashes and other unwanted effects might occur. Please watch warmly as we do our best to update and develop the map.

The novice can choose the DOTA map in the option, in the game input -bot and the robot to fight

Special thanks for the enthusiastic support to the following people：

and all MMD, picture，and sound providers，
Thank you for your contribution in Touhou
Popular Discussions View All (20)

Defense of the Shrines 2