Greenlight > Games > Redbird Menace's Workshop
Greenlight is being retired. For more information on how to submit games to steam, refer to this blog post.
This item has been removed from the community because it violates Steam Community & Content Guidelines. It is only visible to you. If you believe your item has been removed by mistake, please contact Steam Support.
This item is incompatible with Greenlight. Please see the instructions page for reasons why this item might not work within Greenlight.
Current visibility: Hidden
This item will only be visible to you, admins, and anyone marked as a creator.
Current visibility: Friends-only
This item will only be visible in searches to you, your friends, and admins.
26 Gy
Description Discussions0 Announcements1 Comments31

26 Gy is now out! Find your way through the labyrinth and discover its mysteries before the radiation takes you. Available now at http://redbirdmenace.itch.io/26-gy 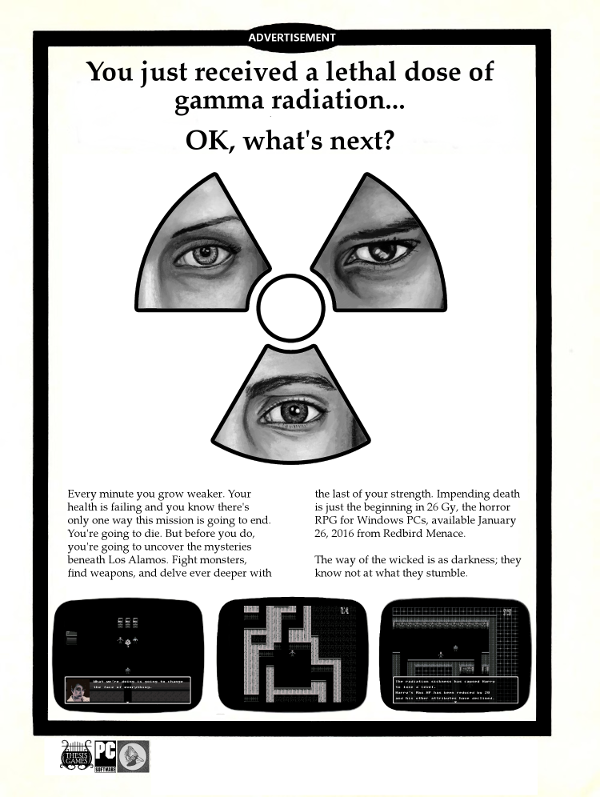 In the year 20XX, a deadly accident leaves three staff members of the Los Alamos National Laboratory with only 72 hours to live. Their deaths inevitable, they volunteer to explore the mysterious, ever-shifting labyrinth beneath the desert facility, where a door was found leading into a never-ending darkness. But what will they find once they have stepped into shadow?

26 Gy is a turn-based RPG in which you lose character levels rather than gain them. Your character--Louise the Scientist, Cecil the Engineer, or Harry the Guard--starts at a high level, representing the relative healthiness of the first "walking dead" stage of acute radiation poisoning. With each passing minute, they lose a level, in accordance with their deteriorating condition. Players must explore the labyrinth to find weapons, armor, and stat bonuses to counteract the increasing effect of the radiation poisoning. Your character's stats will decrease steadily in real-time and you will need these items to continue forward against the monsters in the labyrinth.

- Three playable characters, each with a unique twist on classic turn-based combat
- Procedurally-generated dungeons
- 15 levels filled with monsters and item upgrades
- New Game Minus mode allowing a second playthrough if one character dies from the poisoning before reaching the end of the labyrinth
- Commodore 64-inspired soundtrack by composer Jenny Gibbons

26 Gy is finished and available at http://redbirdmenace.itch.io/26-gy!

26 Gy was developed using RPG Maker VX Ace and is the second title from developer Malcolm Pierce, aka Redbird Menace. Pierce's first game, The Closer: Game of the Year Edition, a comedy-RPG featuring Slovenian philosopher Slavoj Zizek, is available for FREE at http://www.savethecloser.com

Super Ass Poop 64 Jan 31, 2016 @ 1:47pm
While the game itself could use some work, the idea is actually fantastic and I like the way it's executed. Would definitely play.

Sailor_Ghidra Jan 31, 2016 @ 12:13am
The concept is really nice. I'm excited that people are experimenting and deconstructing the rpg genre like Undertale (not to say Undertale was the beginning of such deconstruction) and the eeriness of the game's atmosphere is appealing.

MageRheon Jan 27, 2016 @ 5:44pm
To those complaining about graphics and animation, it's supposed to look that way, like an old commodore game.