Greenlight > Games > Llamaboy's Workshop
Greenlight is being retired. For more information on how to submit games to steam, refer to this blog post.
This item has been removed from the community because it violates Steam Community & Content Guidelines. It is only visible to you. If you believe your item has been removed by mistake, please contact Steam Support.
This item is incompatible with Greenlight. Please see the instructions page for reasons why this item might not work within Greenlight.
Current visibility: Hidden
This item will only be visible to you, admins, and anyone marked as a creator.
Current visibility: Friends-only
This item will only be visible in searches to you, your friends, and admins.
M.EXE
Description Discussions2 Announcements4 Comments40 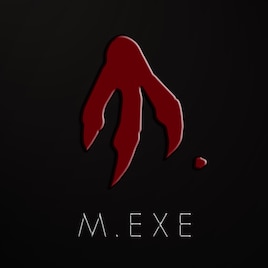 Llamaboy
Offline
See all 4 collections (some may be hidden)

View M.EXE in the store

Wow… thank you to everyone who checked my game out. Because of you, M.EXE has been greenlit and I couldn’t be more excited. So my focus now is to come up with a decent build of the game to actually put out to Steam. I’m still not sure of any details and still have to do some paperwork to get everything moving, but I’m excited that mdot has gotten this far.

I've started a Development Log series on the M.EXE youtube channel. I will keep posting video updates showing the progress the game is making.

Read More
Description
M.EXE is a real-time, multiplayer, monster battle game. As a trainer, give your monster commands in battle to come out on top. Victory or defeat will depend completely on your skill as a monster trainer. Customize your monster by swapping out moves and editing attributes, as well as changing the appearance of your monster. Battle versus friends in 1v1 and 2v2 modes, or battle vs AI by yourself or coop. Explore the different moves and monster types, plan out your strategies, and become the best monster trainer that there ever was!

A mysterious program appears online, with the executable file being M.exe. The program gave every user a monster partner. The monsters all have their unique personalities, but they all have one thing in common. They crave to battle. And to do so efficiently they require a human trainer. M.exe quickly became popular as a competitive game, with many trainers all over the world battling to become the best.

There is a mystery as to who created m.exe and where it came from, as well as an unknown threat.
When I work on a single-player adventure mode for this game, I plan on basing it around this mystery.

Despite the game currently being playable, including multiplayer, the game is still in an early stage. I plan on releasing more monsters and moves as time goes on, as well as fixing any bugs, polishing the game, and adding more and more content while keeping the game balanced.

MDOT is being developed on the Unreal Engine 4. If you are interested in this project don't forget to vote.
For more info on M.EXE, visit www.mdotexe.com
Popular Discussions View All (2)

Farkas Jan 26, 2016 @ 10:50am
Well, looks like a good game, but you should make a little better animations and a better layout... I vote Yes because this have potencial to be a good multiplayer game... But trie to be original and don't take much ideias from Pokemon. XD

M.EXE has been Greenlit and is now listed in the Steam store. For the latest information, purchase options, and discussions for M.EXE, please see it on the Steam Store or in the Steam Community.
Visit Store Page
For more details Visit Community Hub
For latest discussions
If you really, really want to, you can continue to the Greenlight page. Information on this page may be out of date, since all the action has moved to the areas noted above.