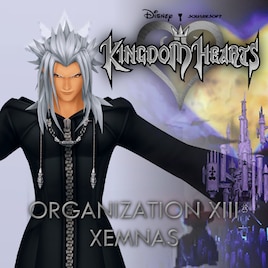 This item has been added to your Subscriptions. Some games will require you to relaunch them before the item will be downloaded.
In 3 collections by Klisz
Klisz's Kingdom Hearts Civilizations

Unique Ability: Sacred Moon - Whenever a Barbarian military Unit is destroyed in combat, gain a boost to production in the Capital. Spies in foreign cities may spawn Barbarians nearby. By default the production boost is equal to 20% of the unit's Combat Strength (or Ranged Strength if it's higher) and the chance each turn of a barbarian spawning from a spy is 10%, but you can adjust both of these in the OrganizationXIII_UserSettings file, or set the production to be from your own units instead (as was the case in an earlier version of the mod).
Unique Unit: Dusk - Replaces Scout. May enter rival territory without Open Borders. Barbarians within two tiles receive a -25% combat penalty.
Unique Building: Memory's Skyscraper - Replaces Police Station. Enemy units in this city's workable radius have a 10% chance per turn of turning into Barbarians.

How do you see the barbs spawning? are you notified or do they just appear? I've not seen it actually working once yet. Would delve into the SQL and meddle with it but I'm not particularly gonna have much success with that.

Lord Setting Jun 25, 2016 @ 10:10am
Klisz, Would it be to much to ask if you could update this mod page with DETAILED Instructions for the People who wish to change the values of this civ's ability .

Goofball Apr 3, 2016 @ 2:52pm
Late to the party, but I just wanted to say thanks for the mod! I think it's done rather well. And as strange as it may sound, using it to help learn the game made me pay much more attention to what spies do and how to manage them. This mod took a lot of thought. The whole Barbarian spawning thing is definitely an example of Xemnas' (and the Org. overall) nature. Particularly if you enjoy diplomatic victory. Here, join our fold city-states. Oh wait, are you still plagued by barbarians? We'll fix that for you. Oh, you other super powers are tired of barbarians? That's fine, get rid of them. It all helps us in the end.

Kelsier - The Mistborn Jan 31, 2016 @ 11:53am
@Klisz: No other mods. I got this one becuase it sounds neat and I really liked the ability that XEMNAS gets with killing barbarians.

Klisz  [author] Jan 30, 2016 @ 3:34pm
@hardinty84: Okay, that's bizarre - this mod contains no alterations to the UnitPanel system nor to the game setup screen. Are you using any other mods? (I know Colonialist Legacies' Australia causes that unit panel bug when combined with Enhanced User Interface, even when the human player is a civ other than Australia.)

Kelsier - The Mistborn Jan 30, 2016 @ 11:50am
Whenever I use this civ, it auomatically sets the game type to a default of SMALL and MARATHON. I also can't seem to get my unit windows to pop up so I can tell my units what to do. Anyone else run into this problem?