Store Page
Tabletop Simulator >  Workshop > Cluny's Workshop
This item has been removed from the community because it violates Steam Community & Content Guidelines. It is only visible to you. If you believe your item has been removed by mistake, please contact Steam Support.
This item is incompatible with Tabletop Simulator. Please see the instructions page for reasons why this item might not work within Tabletop Simulator.
Current visibility: Hidden
This item will only be visible to you, admins, and anyone marked as a creator.
Current visibility: Friends-only
This item will only be visible in searches to you, your friends, and admins. 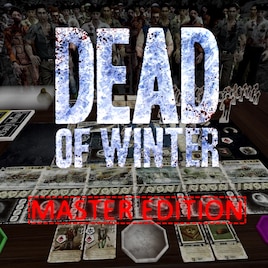 Cluny
Offline
See all 193 collections (some may be hidden)

This item has been added to your Subscriptions. Some games will require you to relaunch them before the item will be downloaded.
Description
[Now including Roberta Plum character and 9 additional Crossroards promo cards.]

"Dead of Winter: A Crossroads Game, the first game in this series, puts 2-5 players in a small, weakened colony of survivors in a world where most of humanity is either dead or diseased, flesh-craving monsters. Each player leads a faction of survivors with dozens of different characters in the game.

Dead of Winter is a meta-cooperative psychological survival game. This means players are working together toward one common victory condition — but for each individual player to achieve victory, he must also complete his personal secret objective. This secret objective could relate to a psychological tick that's fairly harmless to most others in the colony, a dangerous obsession that could put the main objective at risk, a desire for sabotage of the main mission, or (worst of all) vengeance against the colony! Certain games could end with all players winning, some winning and some losing, or all players losing. Work toward the group's goal, but don't get walked all over by a loudmouth who's looking out only for his own interests!

Dead of Winter is an experience that can be accomplished only through the medium of tabletop games. It's a story-centric game about surviving through a harsh winter in an apocalyptic world. The survivors are all dealing with their own psychological imperatives, but must still find a way to work together to fight off outside threats, resolve crises, find food and supplies, and keep the colony's morale up.

This is an adaptation of Nim's version of the initial mod by digicube. The great majority of models and textures were created and prepared in those mods.

The following changes have been made from Nim's revision of digicube's first mod:

If you find the game enjoyable support the tabletop designers by buying it:
Game Website: http://www.plaidhatgames.com/games/dead-of-winter

UPDATED: 15/01/16
Moved three Hands and sets of player cards/dice farther back from the board in response to player-testing.
UPDATED 18/01/16
Extended table-extension boards to accommodate the update of 15/01/16.
UPDATED 22/01/16
Added more zombie props.
UPDATED 07/02/16
Adjusted zombie prop colliders.
UPDATED 22/02/16
Added dice-trays (Credit: Tumba's "Tumba's Magical Dice Were-Tray" Mod).
UPDATED 24/02/16
Added 9 x new promo Crossroads cards and 1 x new promo Character standee and Survivor card;
Added defined discard areas for Survivor, Crossroads and Item cards.
UPDATED 28/02/16
Added Vote tiles for Exile.
UPDATED #2 28/02/16
In response to playtesters:
Corrected rotation of Roberta Plum standee;
Adjusted position of defined discard-areas;
Adjusted size of some cards;
Adjusted size and position of Hand Zones;
Adjusted size of First-Player token;
Made Secret Objectives Alt-Zoom sideways;
Removed dice-trays;
Corrected rotation of red Hand Zone.
UPDATED 09/03/16:
Replaced Custom Model of Exposure Die with Custom Die so it can be directed to any face (instead of behaving as though it were a d6, not a d12);
Retextured Exposure Die so the "Wound" faces are turned to the correct angles to match the authentic tabletop Exposure die (they were turned the wrong way around);
Tweaked dice physics so they can be rolled with greater force with less fear of them rolling out of control.
UPDATED 13/03/16:
Corrected mirrored Food/Starvation reverse-side of tokens.
Added second alphabetical-order markers.
Rewrote Notepad to present player-actions instead of phase sequence.
UPDATED 01/04/16:
Integrated bases into all Survivor standees in order to a) Make tinting the bases to match player hand-zone colours easier; and b) Eliminate TTS glitch-outs following from jointed-base Survivors accidentally being dropped into Bag objects.
Added alternative zombie figurines as 3D models with bases: Credit: Sonycrow's "Figures Compilation Zombies 1" mod.
Removed "wood" default lighting from Survivor standees.
In reponse to play-testing: Removed alphabetical-order markers; Reorganised Survivors into first-name alphabetical order instead of by surnames.
UPDATED 06/05/16:
In response to playtesting, swapped player-colours of Red and Purple positions in order to facilitate mod-users who make use of the Turn Order function in TTS.
< >
39 Comments

ratva Jul 5, 2021 @ 2:16pm
@Man Pretty sure this mod isn't being supported. I made an immersive version of the game with both expansions if you want to check that out.

ratva Aug 3, 2020 @ 8:28pm
@Ragenarok do you have Warring Colonies assets you could share? I'm missing some in my mod. I've added you.
@Mightnubnub if you press L when pointing at a zombie you might then be able to select/delete (typing from my phone so I can't check right now)

Mightynubnub May 14, 2020 @ 6:18am
so i guess this is dead and abandoned? if i knew how to mod i'd simply just remove the background zombies but i don't know how

Mightynubnub May 10, 2020 @ 11:00am
can we get something done about the background zombies? maybe remove them? they keep loading inside the table

ManOfHonor - Szara Jan 14, 2020 @ 4:04pm
I have the same problem as Fak1R with the zombies in the background, my guests often have them sitting in the table or doing weird things like that. How can I remove them?

Ragenarok Nov 5, 2019 @ 11:52pm
Hey Cluny, If you need HQ scans of any assets. I have everything this game has (except giggles the clown)

zinolau Feb 10, 2019 @ 12:37pm
am I missing something? how can I download and install this mod in my tabletop simulator? I subscribed but there is no download button.

Fak1R Nov 14, 2018 @ 5:50am
Guys, we have a problem with those zombies on background. When you host is ok, but when client, zombies are placed in the position of your hand, so it's not comfortable to play. Could you help me how to fix this problem any way?
< >