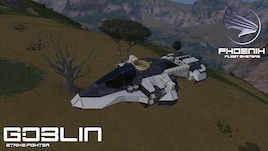 Description
While Gargoyle gunships enjoyed easy prey when hunting CEU ground forces, the opposite was true when defending against other CEU aircraft. For years, Phoenix had focused on spacecraft, arguing that it would be the primary focus of any future conflicts. However, few expected CEU, an asteroid based civilization, to have as much aircraft as they did.

While CEU started off in the conflict by attacking with swarms of small craft, corporations like PFS turned to what they knew best - larger, harder hitting ships. These ships managed to stave off many of the CEU raids, but over time they were worn down by the continual hit and run style tactics of their enemy.

Around the same time the Carnifex showed up, the military had been looking for ways to go on the offensive within the atmosphere. By this time, it had secured much of the space above Europa, and the Carnifex meant that many CEU raids would inflict minimal damage. The military asked for fighters that could return the hit and run tactics on CEU, arguing that such craft would prove more effective than any interceptor craft, as CEU pilots would simply run very shortly after they delivered any payload.

PFS' answer to this was the Goblin, a fighter designed specifically for such hit and run purposes. The Goblin was faster and more agile than the Gargoyle, with nearly the same amount of destructive capability. The primary difference between the two was the Gargoyle's versatility of weapon mounts, as well as its ability to carry more ammunition and thus last longer in combat. However, the Goblin had little use for large ammunition capacity, as it would simply rush into CEU forces, hit them with its rockets and gatlings, and then return home, with a tailgunner to ward off any CEU pilots that decided to pursue.

Over time, the Goblin became a popular choice for any commander that wanted a rapid-response air strike on enemy forces, and it found itself being deployed by many light carriers and even Sabiroid frigates.

Performance Notes
The fighter is tested to handle all biomes of earth. It will struggle with the highest peaks, but it is still capable of flying over them if you maintain a high velocity.

As with all my atmospheric craft, it is suggested that you pull up the nose to get a much faster stop, and bank when turning to cancel out your lateral movement.

Misc
Interested in learning about the lore behind these ships?
< >
5 Comments

Lord Commissar  [author] Jan 10, 2016 @ 11:59am
that's why you have to bank it during turns. Fly like a helicopter, and you can weave through canyons easily

simpliv Jan 10, 2016 @ 10:46am
It's good, it's pretty solid, and there's probably some visual adjustments I'd make to it; the problem I have with it is that it drifts too much. This is the kind of ship you'd expect to stop immediately in any direction, but since this game is really difficult to microbuild in, I can understand why that's not possible.

We can't really post a system without a ship, as there are several components that require a ship to be present to host them.