Store Page
Left 4 Dead 2>  Workshop > Nebberkadnezzar's Workshop
This item has been removed from the community because it violates Steam Community & Content Guidelines. It is only visible to you. If you believe your item has been removed by mistake, please contact Steam Support.
This item is incompatible with Left 4 Dead 2. Please see the instructions page for reasons why this item might not work within Left 4 Dead 2.
Current visibility: Hidden
This item will only be visible to you, admins, and anyone marked as a creator.
Current visibility: Friends-only
This item will only be visible in searches to you, your friends, and admins. 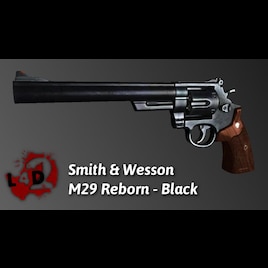 Cele
Offline
See all 1491 collections (some may be hidden)

This item has been added to your Subscriptions. Some games will require you to relaunch them before the item will be downloaded.
Description
First of all, I'd like to apologize for the late release of this. Original plan was to release K1CHWA's SW29 textures in the form of an RNG system, but I ultimately scrapped the idea and decided to release them on an individual basis instead.

So without further ado, here's the black version of my Smith & Wesson M29 Reborn mod. Everything is the same as in the original release, just with K1CHWA's black textures instead.

Replaces the magnum pistol, aka Desert Eagle or Deagle, on Cele's revolver animations.

For the chrome or gold variants, click here or here, respectively.

For an older version compiled on Arby26's animations, click here.

MrCaffeine Oct 22, 2019 @ 3:43am
amazing mode. only thing i have a problem with was when i was down on the floor and the reload animation for the gun was glitched.