Store Page
Train Simulator > Guides > simonmd's Guides
This item has been removed from the community because it violates Steam Community & Content Guidelines. It is only visible to you. If you believe your item has been removed by mistake, please contact Steam Support.
This item is incompatible with Train Simulator. Please see the instructions page for reasons why this item might not work within Train Simulator.
Current visibility: Hidden
This item will only be visible to you, admins, and anyone marked as a creator.
Current visibility: Friends-only
This item will only be visible in searches to you, your friends, and admins.

The Simple guide to - Changing stock with RWTools
By simonmd
To continue my 'Simple Guide to...' series, something I have recently got my head round is how to swap out individual engines or entire consists from scenarios. So many scenario writers these days use stock from countless different DLCs, leaving many disappointed that they can't take advantage of their efforts, often due to only one item being missing. In other cases, you may have a 3rd party item that you might want to swap for the default DTG offering, the class 220/221 Voyager from Just Trains would be a good example.

What is RW Tools and where do I get it?

Comments
What is RW Tools and where do I get it?
RW Tools is a freeware utility program that has been around longer the Train Simulator itself, dating back to the original Railworks days and there was even a version to work on MSTS before that. You can easily download it from Mike's own site here - http://www.rstools.info/downloads.html

It should be noted that you can use RWTools totally FREE with no registration, however, you can only do this for a limited amount of times before you will be asked for a donation via PayPal to get a code to unlock it for ever. However, if you just want to swap a few things around occasionally, you'll have plenty of uses (I think you have something like 30 goes before it locks) and you can in fact, leave the program running in the background indefinitely so you don't have to worry about how many times you've opened it.
Editing your consists in six easy steps. Step 1
Step 1 - Once youve got RW Tools, open it and this rather uninspiring window will appear. For this tutorial you'll want to click the 'Scenarios' tab, 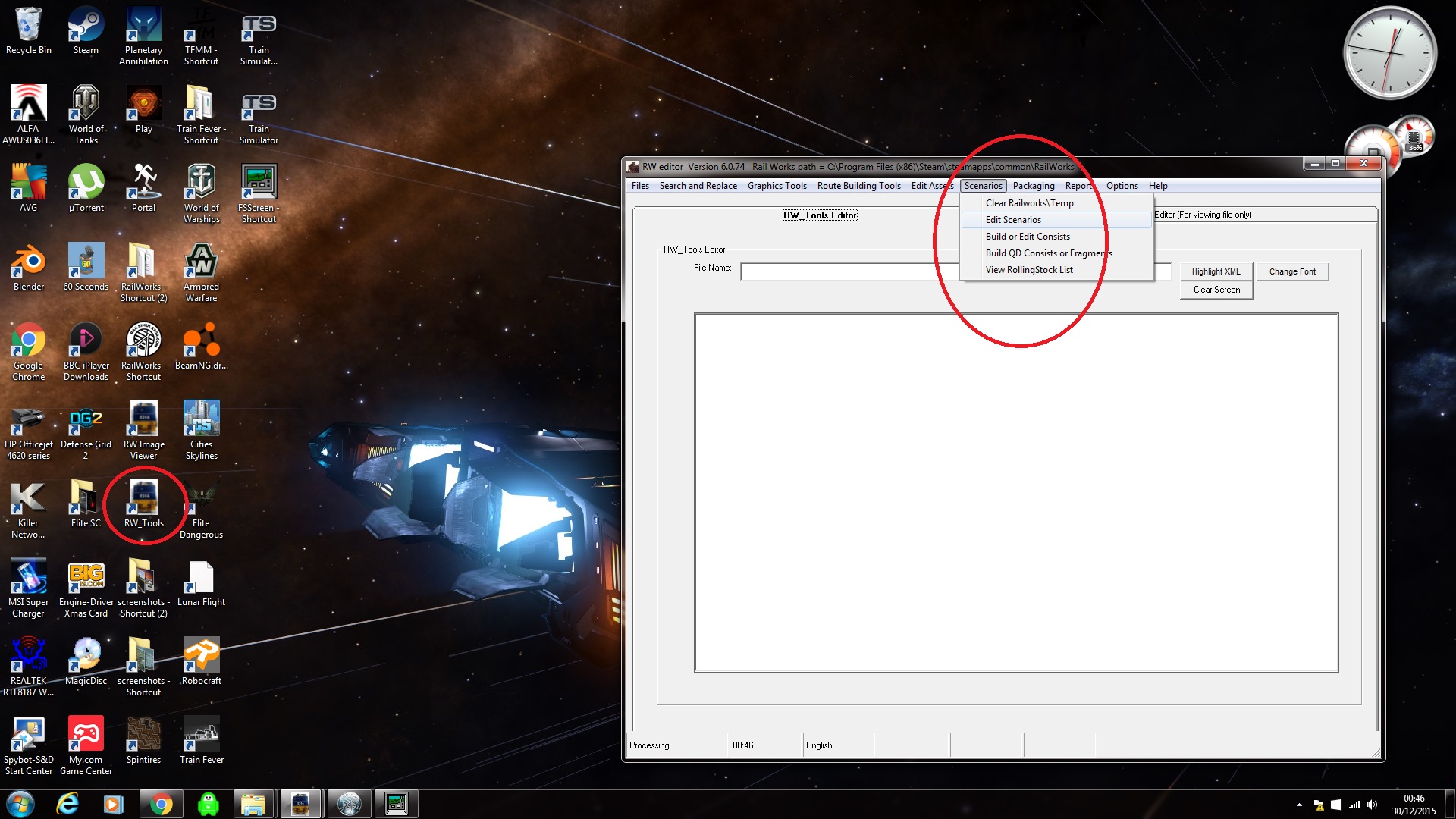 This will open up a new window, at the top you'll see a list of routes you have installed and below, the scenarios for each highlighted route. Once you have selected the scenario you want ot edit, click Edit Selected Scenario, 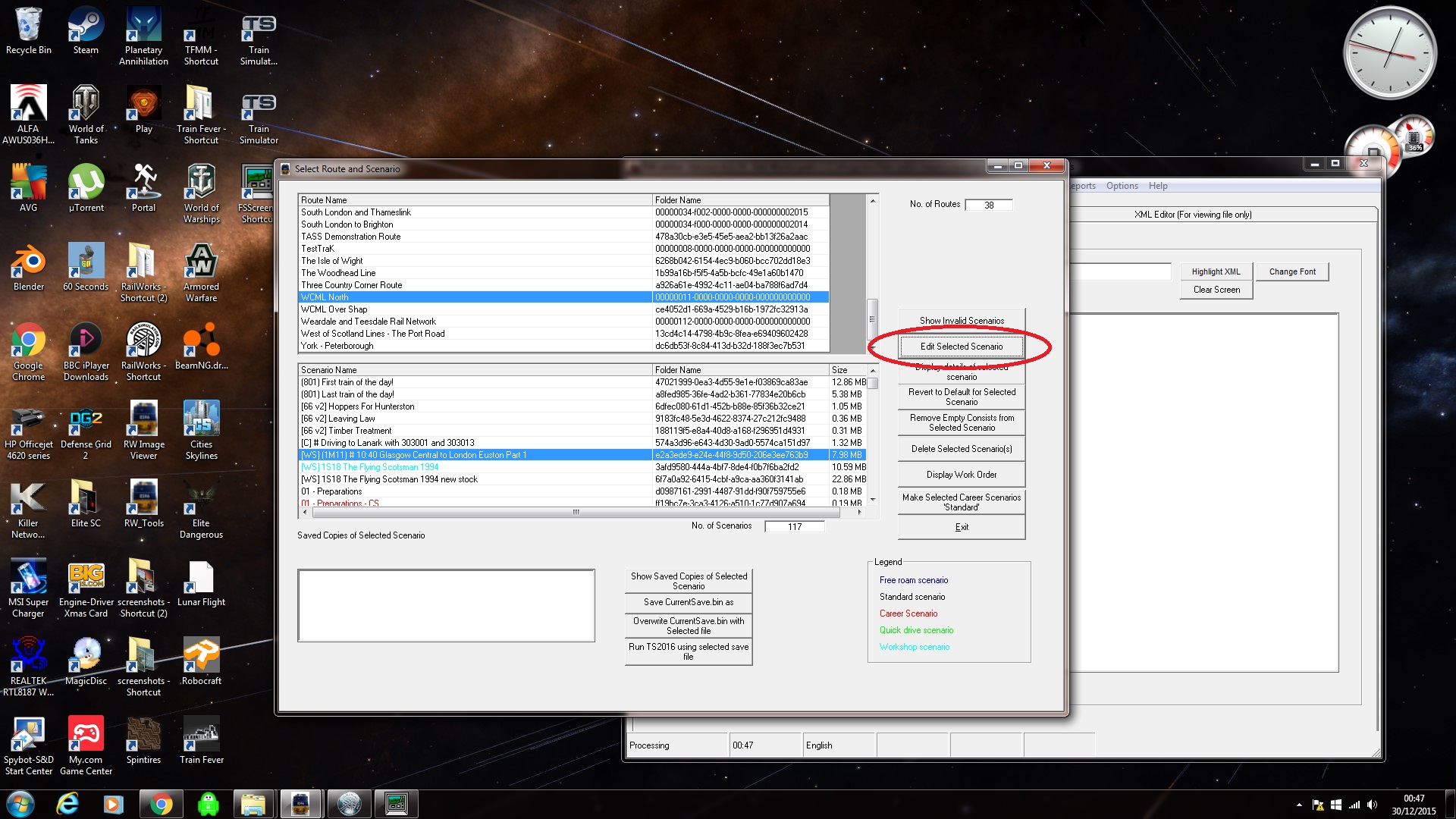 Step 2
Now a fullscreen window will open with all the relevant data on the scenario in question. Most of it is self explanatory, the boxes on the left contain the scenario's description and title along with other info which is best left alone. The two main areas we are interested in I have highlighted in red, top center we have the scenario's list of consists (train formations) and bottom right is the folder structure in your own Railworks fold on your PC where all your individual DLCs, etc are stored and sorted. 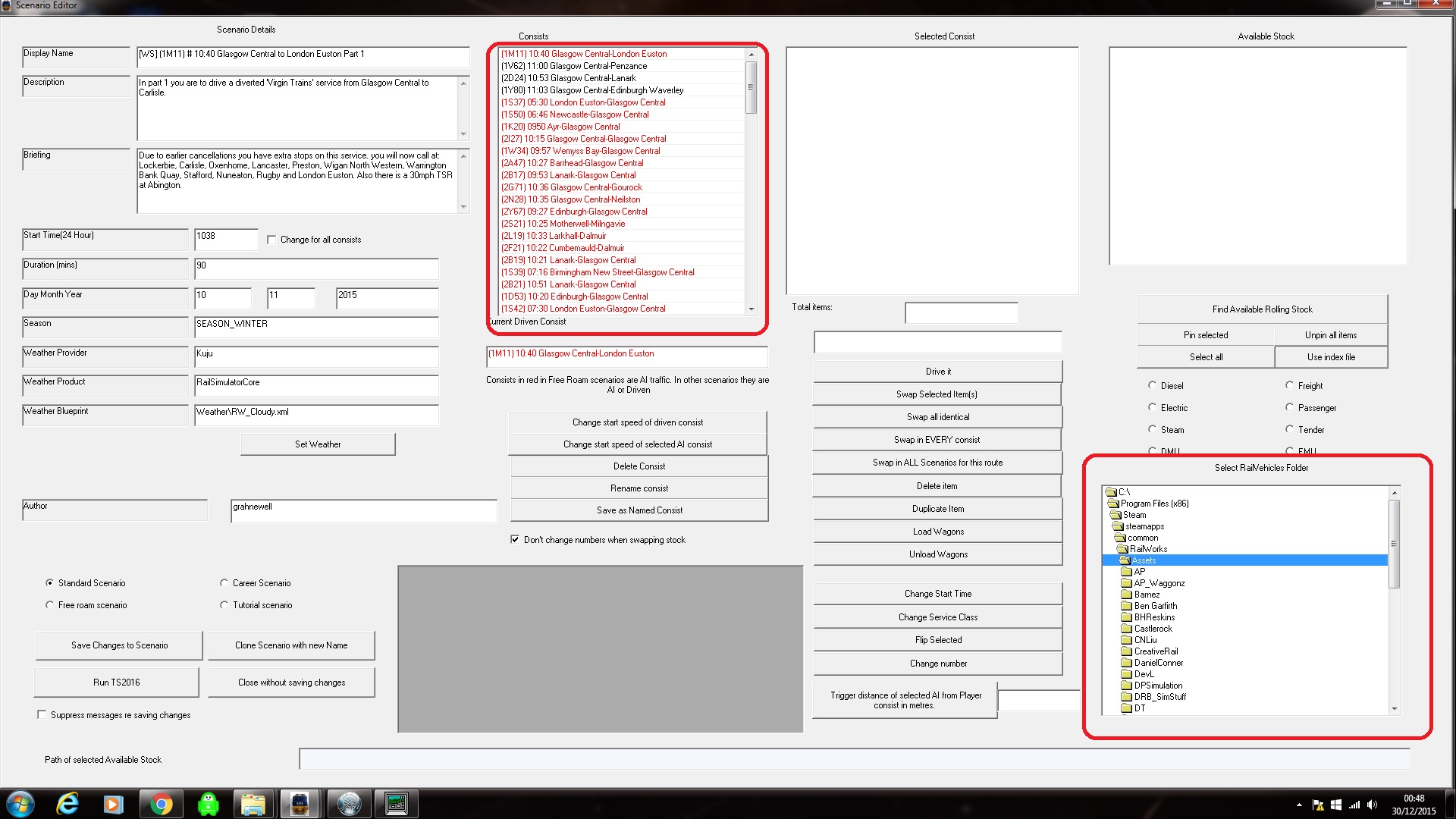 NOTE: If you are planning on editing a workshop scenario, see the added section at the bottom about renaming it first.
Step 3
By clicking with your mouse or scrolling down with your arrow keys, go through the consists until you find one you want to change. Each one you highlight will show its individual contents on the blank screen just to the right of the box they are in.

If RW Tools finds a consist or unit you dont have, it will open up a warning box with the error details in it, 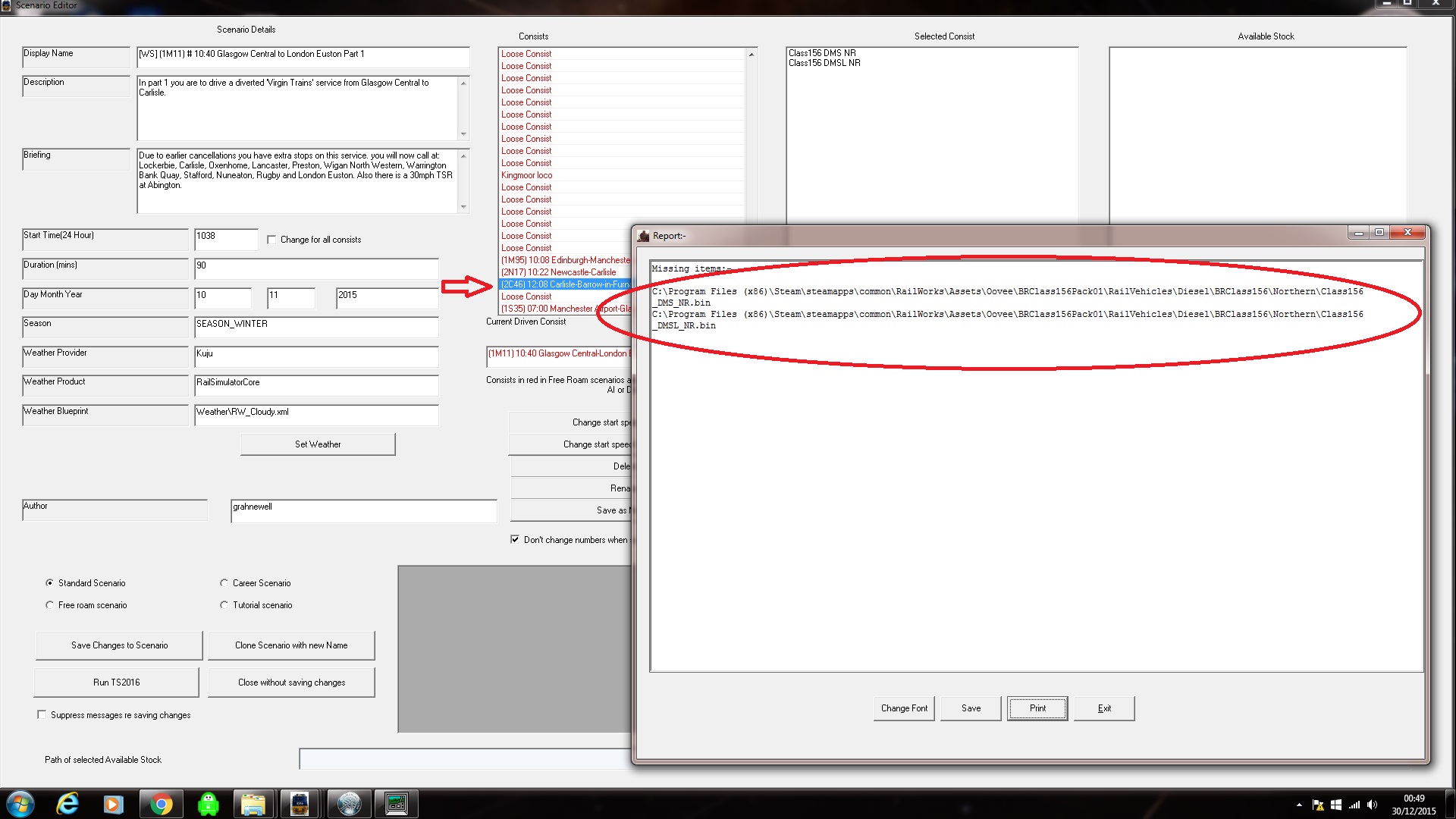 Here you can see the 12.08 Carlisle to Barrow in Furnace has a problem with it's class 156 stock which in this case, is missing. The box shows you where it 'should' be in your RW folder and sometimes, this is due to a bit of stock being wrongly installed or named. In this case, I simply don't have the class 156 and was expecting this error.

Note: You will also get this apparent error if the stock concerned is located in an '.ap file'. These are similar to zip or rar files and is something DTG has adopted for newer DLCs for some reason. If the DLC is in an .ap file, RWTools will not 'see' it and report it as missing as above. If you happen to know you have the DLC being reported, then click close and ignore the popup.
Step 4
In the box in the bottom right, locate the train / wagon you want to replace the missing item with. In this case, I have the class 150 in the same livery, so that will do nicely. 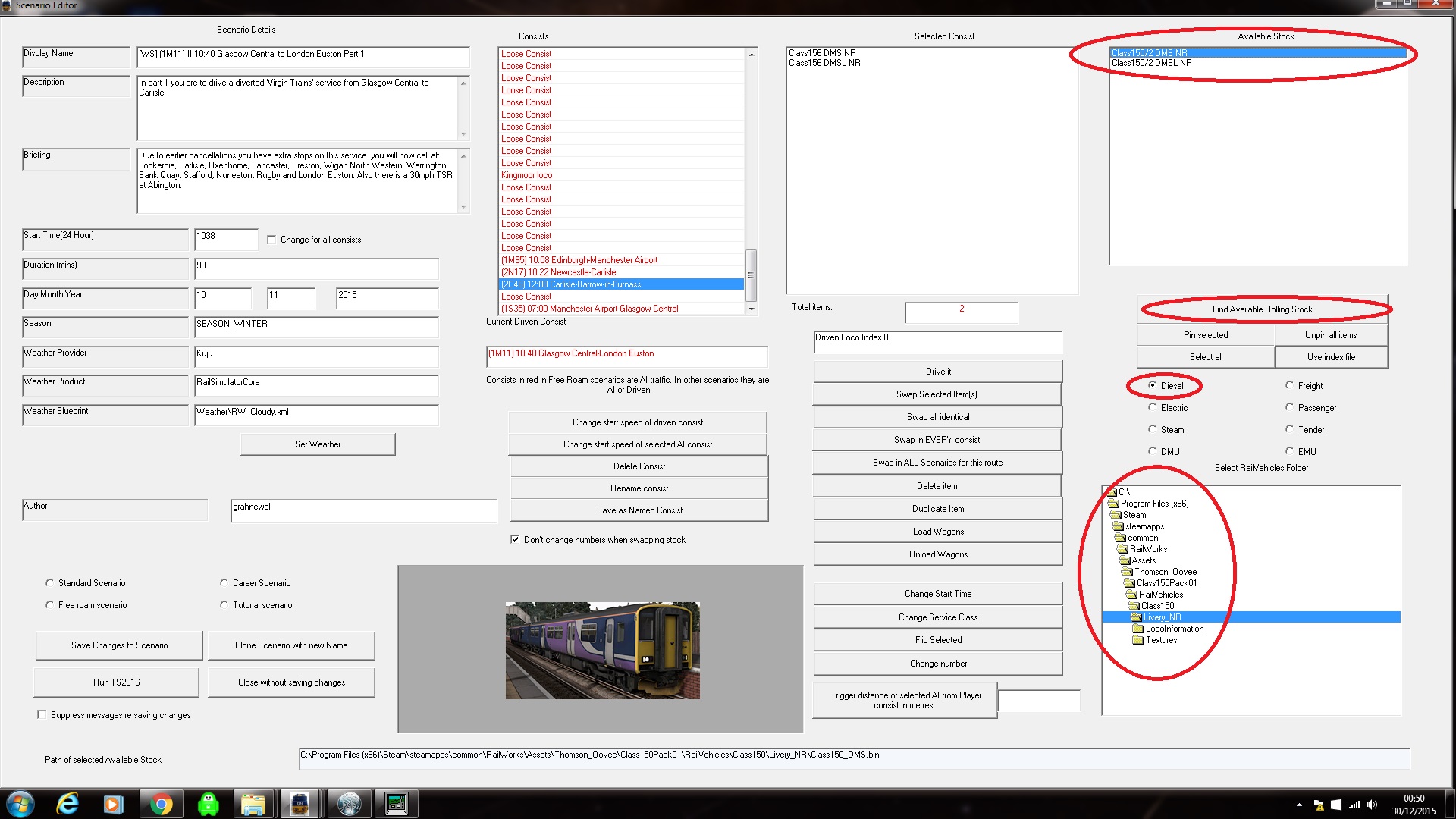 You will see that I have selected the NR livery folder in the class 150 pack, then I selected the type above, in this case 'Diesel' and then I clicked the large 'Find Available Stock' button above that to make it search for the unit itself which is then displayed in the top right as you can see.

If you are unsure to the root path of the item you want to use, you can simply select the type (Diesel, Electric, Freight, etc) then press the Find Available Stock button just from the main folder, in this Class150pack01. As you can see, it's not that intuitively laid out, you have to basically do things from the bottom upwards, instead of what would seem more natural.

If you're not sure even what the main folder is for the train you want to use, they will all be in the 'Assets' folder so open a Windows Explorer window and navigate to C:\Program Files (x86)\Steam\steamapps\common\RailWorks\Assets (assuming your RW folder in on your C drive....)
Then you can do a search in that window for the item so you know where it is for use here.
Step 5
Once youve selected the appropriate unit, click on it and also the unit you want to swap it with so two are highlighted. Now you have two choices,

1, only replace this particular unit with 'Swap Selected Items' or

2, 'Swap in Every Consist' that will replace ALL of the units of the same type in the entire scenario. 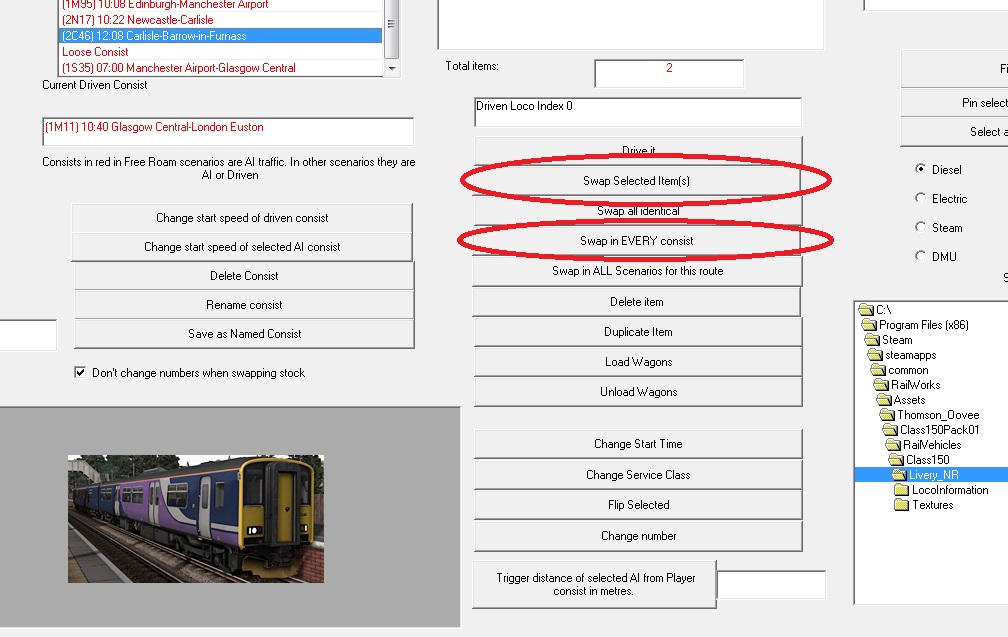 If swapping one item, for example if you're only changing your own player train to another you prefer, this will happen almost instantaneously. However, if you've chosen to swap all the items in the entire scenario, this can take some time so be patient! Eventually, either way, you will get this box pop up to say it's been done correctly. 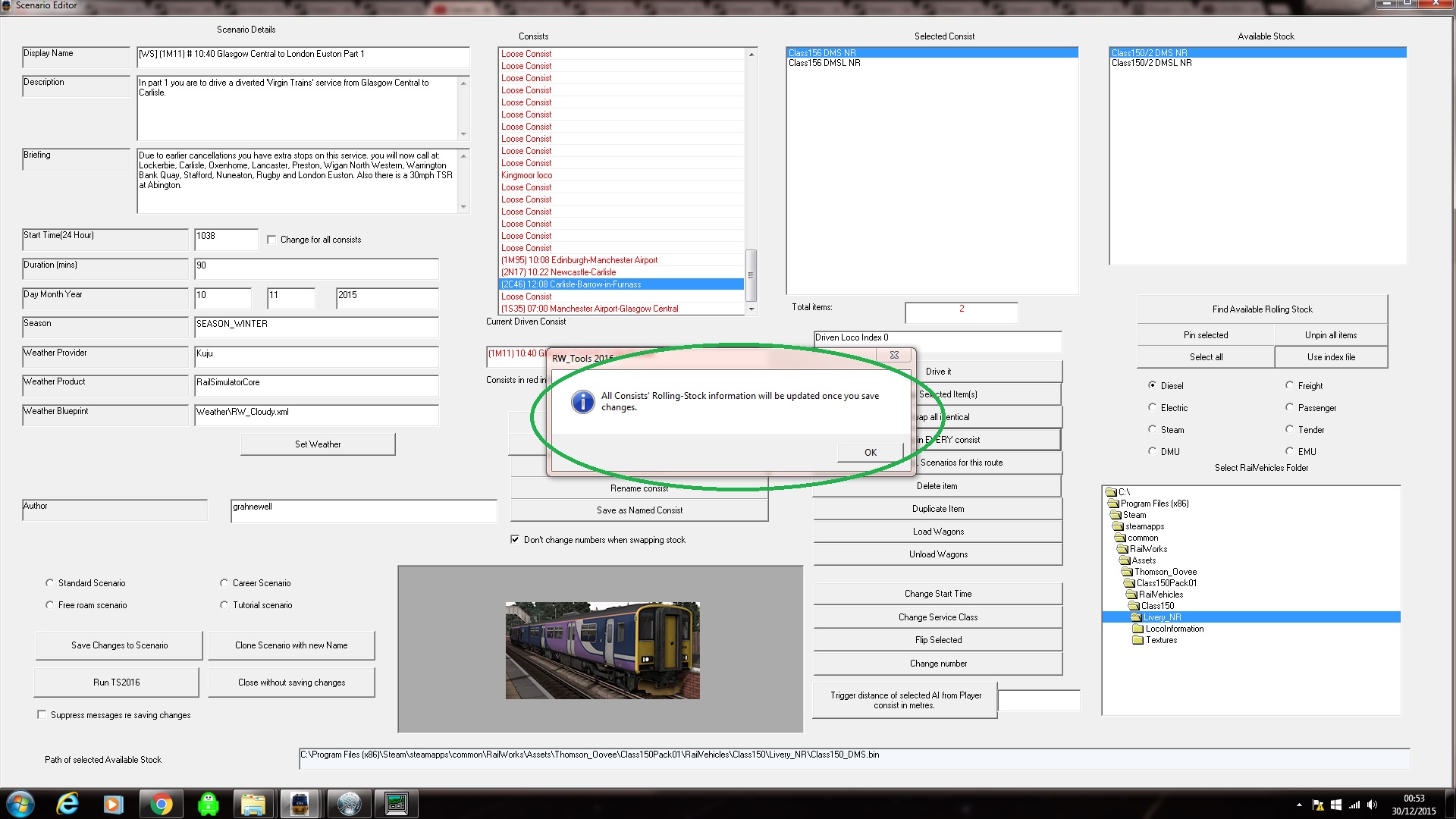 For only one item, swapping the loco on a loco hauled service for example, you may skip to the next step and save. However, if you are doing a multiple unit as we are here, you must do each unit in turn. Here it's simple, we just have the DMS and DMSL units to swap but others will have many more. Swap each one in turn until you've done the lot.

Note: When swapping and wanting to change the units for every consist, the original unit name of the one you are replacing will not change until after you've saved. Therefore, if doing a complicated consist like the class 390 or 801 for example, try to keep track of which one you've done and what you swapped it with! A pen and paper can't hurt here.
Step 6
Once you have done the previous step, YOU MUST SAVE!!! (Note: you can swap as many items in the same consist as you like without saving each time, just remember to save before you move onto the next one.) 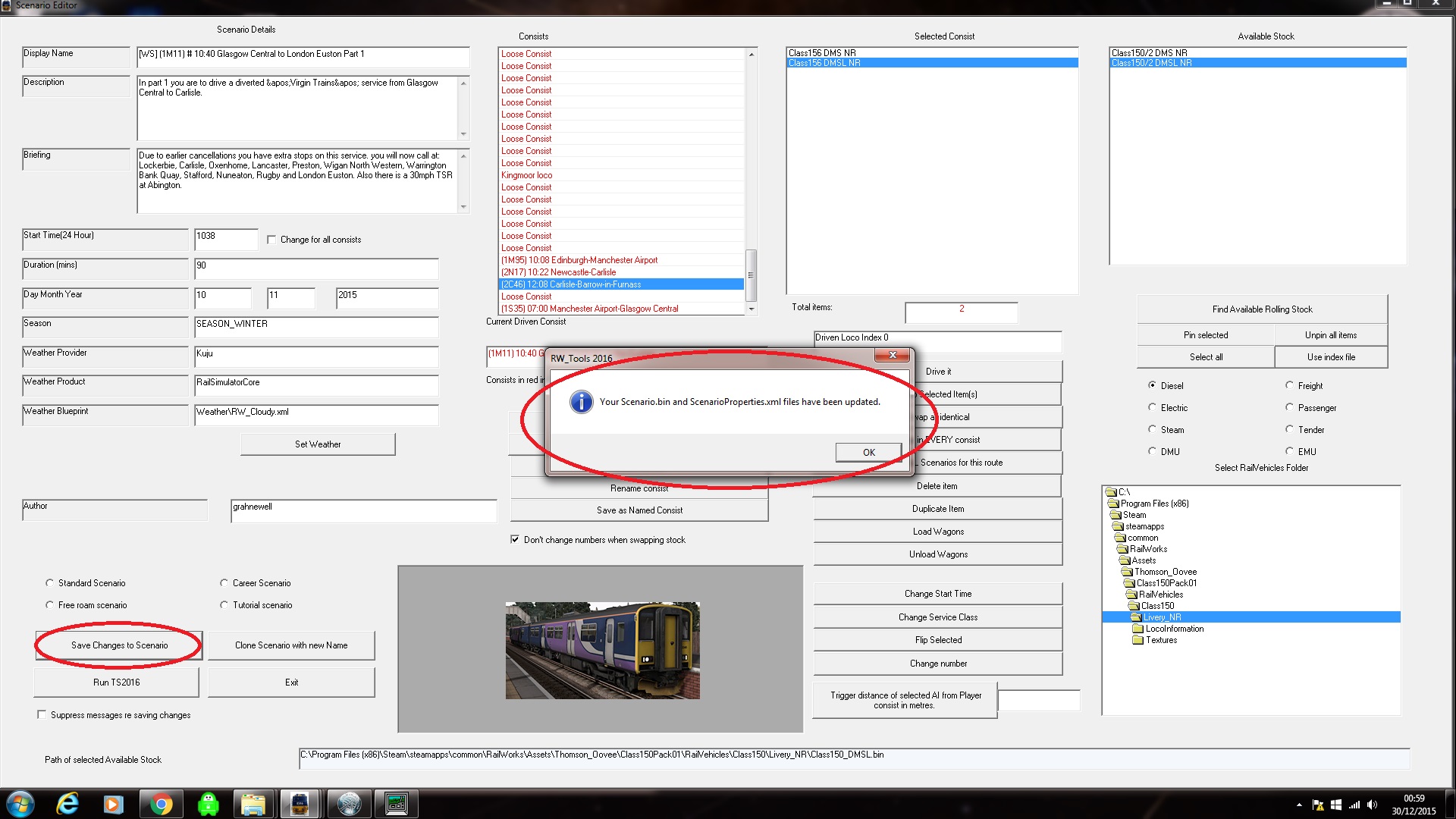 Click the 'Save Changes to Scenario' button on the bottom left and once the box highlighted in the middle comes up, you can click 'OK' and the window will close.

I stressed saving in caps above because after swapping your units as done in the last step, if you do ANYTHING else, even clicking on another consist without saving, all you've done will be lost and you'll have to do it again. If you have any more units to change, reload the page as described in Step 1 and repeat until finished, however, it's always worth re-opening the scenario to double check what youve done has worked before you go back to the game and try to play, 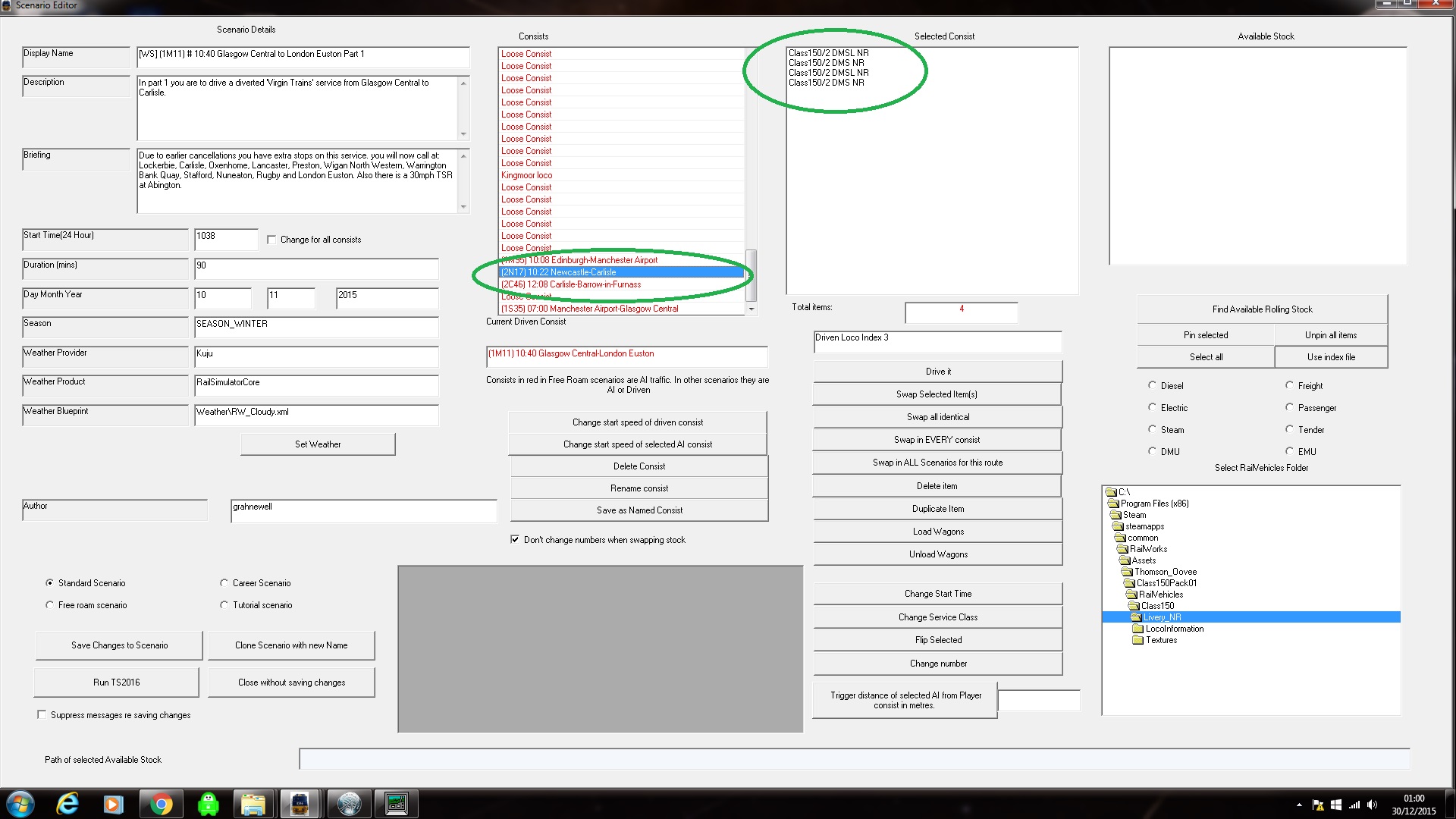 Here you can see I've highlighted the consist above the one we actually changed because I clicked the 'Swap in Every Consist' button and this demonstrated that this too is also now a class 150 unit. Note also that even though we only changed two units in the previous step, all four here have been changed as each unit is replaced like for like no matter how many there are.

Once you get youre head round it, you'll find this a powerful and useful tool that will enable you to get far more out of TS and maybe even save you money as you won't need to get so much stock!

As always, comments and questions are welcomed below and if there's anything you feel i've not explained very well, please let me know. Have fun!
Extra Note: Editing workshop scenarios
If you are editing a scenario downloaded from the workshop, I highly recommend that you copy or 'clone' the scenario first and edit the copy. The reason for this is that if the workshop item gets refreshed, TS may re downloaded it, overwriting the changes you've made.

To do this, simply rename your scenario (top left hand corner), just adding a single character will do, I personaly simply add a hash '#' to a title so I know its the edited version.

Once done, click the usual save button and it will prompt you as to whether you want to clone or rename. Click the appropriate option and exit.

Now you will be free to edit the renamed or 'clone' scenario without worry about it being overwritten.
Using routes packaged in .AP files
So as not to over complicate things here, I made a separate guide to allow the above to work with newer routes that are packaged in '.AP' files.

badwebdiver May 21, 2018 @ 7:57am
Thank you. I've found this tool totally invaluable, to fix routes that had content I didn't own and swapping it wout my current library. Also for when locos get updated to a newer version.