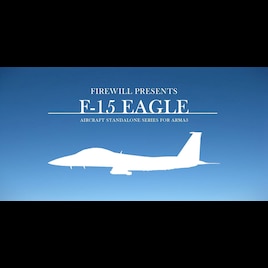 Firewill
Offline
See all 6983 collections (some may be hidden)

This item has been added to your Subscriptions. Some games will require you to relaunch them before the item will be downloaded.
Description
/*YOU MUST NEED FIR AIRWEAPONSYSTEM PACK!*/
Weapon pack Workshop Link

The McDonnell Douglas (now Boeing) F-15 Eagle is an American twin-engine, all-weather tactical fighter designed by McDonnell Douglas to gain and maintain air supremacy in aerial combat. It is among the most successful modern fighters, with over 100 victories and no losses in aerial combat with the majority of the kills by the Israel Air Force. Following reviews of proposals, the United States Air Force selected McDonnell Douglas' design in 1967 to meet the service's need for a dedicated air superiority fighter. The Eagle first flew in July 1972, and entered service in 1976.

The Eagle has since been exported to Israel, Japan, and Saudi Arabia, among other nations. The F-15 was originally envisioned as a pure air superiority aircraft. Its design included a secondary ground-attack capability that was largely unused. The design proved flexible enough that an all-weather strike derivative, the F-15E Strike Eagle, was later developed, entering service in 1989. The F-15 Eagle is expected to be in service with the U.S. Air Force past 2025. Newer models are still being produced for foreign users. The F-15 production line is set to end in 2019, 47 years after the type's first flight.

Known Issues
- Cockpit is wip.
- When Eject with F-15D/E, sometime WSO/Insturctor's Parachute is not removed.

Mr.R - he is my real friend, he provide of afterburner sound and AIM-9 Lock Tone Sound.

your support is can be make keep working more!
Patreon[www.patreon.com]
Paypal[www.paypal.com]
Popular Discussions View All (5)

marxman28 Jun 16 @ 10:54pm
This is nice and all but the pylons on the Silent Eagle's wings don't show up even if you have weapons there. I mean, the weapons work but they look kind of goofy without pylons.

Kartoffelklaus Mar 17 @ 10:14am
Is there any way to get a key for this mod, so that i can use it on my private server?

SickSidewinder9 Feb 24 @ 9:02am
Did you fix the targeting pod position?
Working on any new cockpits?