Greenlight > Games > UnfoldGames's Workshop
Greenlight is being retired. For more information on how to submit games to steam, refer to this blog post.
This item has been removed from the community because it violates Steam Community & Content Guidelines. It is only visible to you. If you believe your item has been removed by mistake, please contact Steam Support.
This item is incompatible with Greenlight. Please see the instructions page for reasons why this item might not work within Greenlight.
Current visibility: Hidden
This item will only be visible to you, admins, and anyone marked as a creator.
Current visibility: Friends-only
This item will only be visible in searches to you, your friends, and admins.
DARQ
Description Discussions4 Announcements6 Comments277 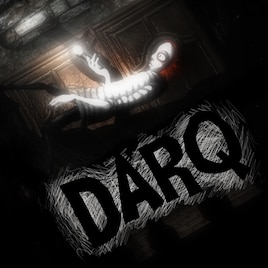 UnfoldGames
Offline
See all 35 collections (some may be hidden)

View DARQ in the store

I'm excited to say that DARQ now has a store page. We're about half a year away from the release, but you can now add DARQ to your wishlist so you can stay tuned for more updates! Also, if you haven't yet, watch the new trailer (on the store page) - DARQ has evolved quite a bit since the greenlight trailer.

I'm super excited to share with you a new teaser trailer for DARQ. The game has evolved so much since it was greenlit! I appreciate your patience, I'm doing my best to deliver a truly outstanding game and it's taking some time to achieve this extra level of quality. I'm hoping to release the game later in 2017.

I'm always happy to hear from you. You can contact me on twitter (@UnfoldGames) or via email (info@ungoldgames.org)

Hope you enjoy the new teaser!

DARQ is a unique psychological horror game set in a zero-gravity lucid dream.

The game tells the story of Lloyd, a boy who becomes aware of the fact that he is dreaming. To Lloyd's misfortune, the dream quickly turns into a nightmare and all attempts to wake up end in failure. While exploring the darkest corners of his subconscious, Lloyd learns how to survive the nightmare by bending the laws of physics and manipulating the fluid fabric of the dream world.

In DARQ, sound plays a very important role. There are sections of the game that take place in absolute darkness and in order to navigate the environment, Lloyd has to rely on the location of sounds.

The game is designed to be a moving artistic experience. The art style of DARQ is a juxtaposition of opposites: it combines 3d locations with 2d hand-drawn characters, beauty with horror, elegance with roughness...The beauty element becomes the means of seduction, inviting the player to enter the world of Lloyd's nightmare.

We're very particular about the use of light in our game - both as a part of the overall aesthetics, as well as the main component of the gameplay. Light and shadow are almost the main character in DARQ. The game builds tension based on the uncertainty of not knowing what to expect when switching the flashlight on and off.

Lloyd is up against much stronger enemies; he has no chance of winning in an open confrontation. Instead, he has to rely on stealth and careful planning to avoid getting detected.

In addition to hearing, most enemies posses good sight. That's why sneaking by would often require switching the flashlight off. When the light is off, it becomes crucial to listen closely to the sounds made by enemies. Faster and more irregular breathing indicates higher level of alertness, and therefore higher possibility of being detected.

THANK YOU FOR YOUR TIME & SUPPORT!
We would love to hear from you!
Popular Discussions View All (4)

UnfoldGames  [author] Dec 21, 2017 @ 4:29pm
@GCMTX yes! The game has evolved a lot since the greenlight campaign, but it's definitely coming out some time in 2018. Check out DarqGame.com for more info.

NoTuxNoBux May 17, 2017 @ 7:19pm
@unfoldgames That's great to hear. I used to be a software developer (currently out of work sick) so if you need any beta testers, I'd be happy to help, for free if course.

Looking forward to the game :)

UnfoldGames  [author] Apr 27, 2017 @ 1:43pm
@AC1D OMEN , hey! Coming along quite well! Hoping to finish it in about 6 months. You can keep an eye on the development on twitter @UnfoldGames

DARQ has been Greenlit and is now listed in the Steam store. For the latest information, purchase options, and discussions for DARQ, please see it on the Steam Store or in the Steam Community.
Visit Store Page
For more details Visit Community Hub
For latest discussions
If you really, really want to, you can continue to the Greenlight page. Information on this page may be out of date, since all the action has moved to the areas noted above.