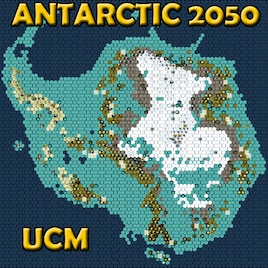 Uyiyri
Online
See all 6 collections (some may be hidden)

This item has been added to your Subscriptions. Some games will require you to relaunch them before the item will be downloaded.
Description
[Translate - I don't speak or write in English]

Earth, 2050. Apocalypse, the temperature on earth was the dozens in the last decade, for reasons that are unknown to scientists. The thaw in Antarctica did sea levels rise tens of meters, the fauna and flora have been destroyed, billions of people have died from hunger, unbearable temperatures and destruction of the largest and most important cities that were on the coast, entire economies were reduced to powder, but like a second chance, Antarctica appears as a chance of survival. 24 nations with about 100 000 people each, move to the South Pole. You will be able to survive in this "New Earth"?

- Hypothetical map of Antarctica thawed in 2050, based:
https://upload.wikimedia.org/wikipedia/commons/b/b7/AntarcticBedrock.jpg
- The map is not exactly accurate, because it doesn't consider the rising sea level elapsed defrosting nor the "map-example" allows me to do, because the minimum value indicated it is 2,500 ft (c.760 meters). If all the ice melted in the world, from what I read today, the sea level would not rise 100 meters (c.330 ft). What is not little, I know.
- Map Size: 80x80
- 22 Nations (Some with different colors)
- Germany, Saudi, Brazil, China, Korea, Egypt, Spain, United States, Ethiopia, France, Greece, India, Indonesia, Britain, Japan, Turkey, Iran, Portugal, Italy, Russia, Sweden (CivV Names).
- 2 City-states
- Religion disabled
- Barbarians activated
- Total destruction
- Revealed map
- All in contact
- Abundant resources, much uranium and petroleum
- Fictional rivers
- Start locations are fixed

* I still do not know how to put the difficulty and types of victory as an option, who knows comments below.

. zentralhellundgesucht Thanks for the translation in German, already placed with your credit at the end.

Khorps Sep 11, 2016 @ 6:21am
since the Earth spins and thus alot of water flows to the equator creating the elliptical shape of the Earth shouldn't alot of the water be land?

other than that, good luck, I got lucky and spawned on the extending island to the north west XD

DANGER NOODLE Jan 8, 2016 @ 3:08pm
Except Antarctica is mostly rock underneath and would not shrink to that level
< >