Greenlight > Games > Koonschi's Workshop
Greenlight is being retired. For more information on how to submit games to steam, refer to this blog post.
This item has been removed from the community because it violates Steam Community & Content Guidelines. It is only visible to you. If you believe your item has been removed by mistake, please contact Steam Support.
This item is incompatible with Greenlight. Please see the instructions page for reasons why this item might not work within Greenlight.
Current visibility: Hidden
This item will only be visible to you, admins, and anyone marked as a creator.
Current visibility: Friends-only
This item will only be visible in searches to you, your friends, and admins.
Avorion
Description Discussions3 Announcements8 Comments311 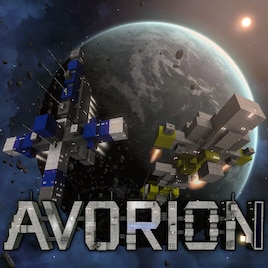 Koonschi
Offline
See all 34 collections (some may be hidden)

View Avorion in the store

The first place will be rewarded with a 50$ Steam Gift card.

For the contest we released a separate, stand-alone editor for this contest, which will feature the latest textures and all blocks that existed up to then.

You can find the ship building contest, as well as more details over here: http://www.avorion.net/forum/index.php?topic=421.msg1835#msg1835

We hope to see some awesome ships made by you guys very soon!

The new demo version 0.8.5 for Avorion is out! We listened to feedback and watched people play the game and we made some gameplay changes that improved the pace of the game by a lot.

In order to demonstrate what Avorion is capable of in terms of combat, we also added the Super Action Mode, where you start in a fully equipped combat-ready ship with 4 laser turrets and have to fight off neverending waves of enemies.

Hope you enjoy it!

Read More
Description
Release date: January 23rd 2017
Avorion is a space sandbox game where players build their own ships from blocks of various sizes and shapes.
Ships can grow up to any size, from small fighters to large battleships.
Explore, fight, mine, trade and build your own ships and space stations!

Players can gather resources to build their ships and trade or help the AI factions to gain money. Explore the galaxy, claim large asteroids and either sell them or build mines. Defeat pirates and other scoundrels, loot their wreckages or become a pirate yourself as you raid freighters. Discover new factions, fight them or make them your allies, create your own empire and command your ships in large space battles. Fight alongside or against your friends and race to the center of the galaxy!

Current Development State:
The game is currenty in a playable (yet still unoptimized) state and I will release the game as early access as quickly as possible once greenlit.
Next up I will be tackling performance issues and get rid of bugs, so the early access version will be as polished as possible.
< >
311 Comments

Avorion has been Greenlit and is now listed in the Steam store. For the latest information, purchase options, and discussions for Avorion, please see it on the Steam Store or in the Steam Community.
Visit Store Page
For more details Visit Community Hub
For latest discussions
If you really, really want to, you can continue to the Greenlight page. Information on this page may be out of date, since all the action has moved to the areas noted above.