Greenlight > Games > AO Games Studios's Workshop
Greenlight is being retired. For more information on how to submit games to steam, refer to this blog post.
This item has been removed from the community because it violates Steam Community & Content Guidelines. It is only visible to you. If you believe your item has been removed by mistake, please contact Steam Support.
This item is incompatible with Greenlight. Please see the instructions page for reasons why this item might not work within Greenlight.
Current visibility: Hidden
This item will only be visible to you, admins, and anyone marked as a creator.
Current visibility: Friends-only
This item will only be visible in searches to you, your friends, and admins.
Build It
Description Discussions0 Comments102 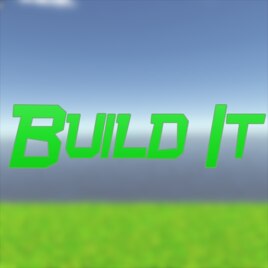 View Build It in the store

Build It is a sandbox game, currently in alpha phase, in the game you can build and design anything by our special tools like welder, painter, duplicator, physics and many more. After the building progress you may play with friends/AI in many different modes like Team Death Match, Capture The flag, Parkour and many will come at the future.

Early access
The game is still in development and will be launched as Early Access after the Steam Greenlight.

Garry's Mod copy
This game is not a Garry's mod copy, the game is in early development phase, the foundation of the game has similarities to Garry's Mod, the game has lots of different features that are unique and more will come at the future, for example - electric system, in game mod creation, the ability to control the game with the console and many more.

Have idea to improve the game ?
Send us a message on steam or leave a comment with the idea and maybe you will get a free copy of the game!

(not in this order)

Console
In the console you can put commands that change in game things, like /time set [hour]:[minutes], /toggleRain, /fps, /set gravity [amout], /save and many more.

Electric System
In the game you can connect things that require electricity to a battery, like lamps, engines and more.

Car System
Currently in development, will update at the future.

Helicopter System
Currently in development, will update at the future.

AO Games Studios  [author] Jul 20, 2018 @ 12:41pm
Hey everyone, I'm writing here just to let you that the game is nearly ready for the closed beta and early access release 2 weeks after that. I added 800 items to build with, city system, vehicle building & driving system and plenty more stuff. you still can sign up for the closed beta for the next few days and after that the beta will start. Thank you everyone for your support.

AO Games Studios  [author] Oct 8, 2017 @ 1:17am
The early access release date has postponed to early 2018.
I'm working on this game solo, I don't want to release a broken game, I want to release it playable and with plenty of content.
When it will be released you will understand why it took so much time.

Sorry for the delay, hope you understand.

Build It has been Greenlit and is now listed in the Steam store. For the latest information, purchase options, and discussions for Build It, please see it on the Steam Store or in the Steam Community.
Visit Store Page
For more details Visit Community Hub
For latest discussions
If you really, really want to, you can continue to the Greenlight page. Information on this page may be out of date, since all the action has moved to the areas noted above.