Store Page
Prison Architect>  Workshop > Brento666's Workshop
This item has been removed from the community because it violates Steam Community & Content Guidelines. It is only visible to you. If you believe your item has been removed by mistake, please contact Steam Support.
This item is incompatible with Prison Architect. Please see the instructions page for reasons why this item might not work within Prison Architect.
Current visibility: Hidden
This item will only be visible to you, admins, and anyone marked as a creator.
Current visibility: Friends-only
This item will only be visible in searches to you, your friends, and admins. 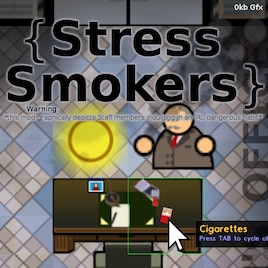 This item has been added to your Subscriptions. Some games will require you to relaunch them before the item will be downloaded.
In 1 collection by Brento666
{ My PA Mods }

12 items
Description
Animated smoking staff!
Running a prison can be very stressful. No wonder then that just placing a pack of cigarettes around will get most staff to endulge. Place them on desks, benches, drinksmachines or wherever you wish to permit staff to light up!

*The effect in the thumbnail is exaggerated for illustration, the in-game effect is prettier; more random and sparser.

IRL smoking is bad mmmkay! But this is way-healthier then 'e-smoking'; I call it 'd-smoking'!

v0.667 Release notes: Initial release!
-Could have easily made everyone chain-smoke; but they don't! After every smoke a timer is set so that person doesn't light up straight away again! (Staff only smoke about 4-10 smokes a day max I estimate.)
-Added a 'zippo' (lighter) sound when someone lights up.
-Mechanics are already in place to have people quit smoking.
-Mechanics are already in place to count total smokes.

Future plans/ideas;
-I might add in chain-smoking as a addiction level in a future update.
-I might add some coughing to the mix later.
-A future update to this mod could start making addicted staff sickly / very sick indeed. (I am slowly working on my grand-opus; 'Surgery' and will link the 2 when it is ready ;)
-I might try expanding the mod with nicotine patches, support groups and motivational speakers. But staff are notoriously stubborn atm and don't like to do reform themselves... so will see what will fit and what will work.

dunlapchris18 Jul 29 @ 12:51pm
They could add a smoke detector that would go off if there is to much smoke, so you have to make a designated smoking room (Like IRL)

Blixibon Nov 24, 2015 @ 11:22am
In case this helps, prisoners protest their Safety need when the danger level is high.