Greenlight > Games > Tommo Inc.'s Workshop
Greenlight is being retired. For more information on how to submit games to steam, refer to this blog post.
This item has been removed from the community because it violates Steam Community & Content Guidelines. It is only visible to you. If you believe your item has been removed by mistake, please contact Steam Support.
This item is incompatible with Greenlight. Please see the instructions page for reasons why this item might not work within Greenlight.
Current visibility: Hidden
This item will only be visible to you, admins, and anyone marked as a creator.
Current visibility: Friends-only
This item will only be visible in searches to you, your friends, and admins.
BUBSY Two-Fur
Description Discussions24 Announcements2 Comments1056 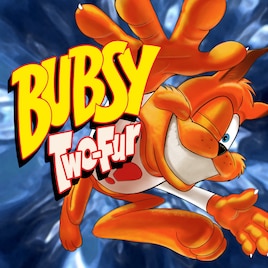 In commemoration of this momentous occasion, Bubsy insisted that official Bubsy T-shirts be made, which are now available from Amazon[amazon.com].

And now for some Q&A! Here's the answers to some of the most common questions we've received since the start of our Greenlight campaign.

Q: Who are you, and why have you done this?
A: Retroism[retroism.com] is Tommo Inc.'s publishing brand for retro games. We publish digital download editions of classic games from MicroProse, Infogrames, GT Interactive, Accolade and more! We're bringing Bubsy back so more people can experience his original games for themselves, and because we think he deserves another shot.

Q: Do you really own the rights to Bubsy?
A: Yes! We purchased the Bubsy IP and the Accolade Brand in Atari's bankruptcy auction in 2013.

Q: Will the Bubsy Two-Fur come with Steam Trading Cards?
A: Yes, trading cards will be available from day one!

Q: What about Bubsy's other games? Will you be doing anything with 'Fractured Furry Tales' or 'Bubsy 3-D'?
A: Purr-haps. Much will depend on the reception and feedback from Bubsy Two-Fur.

Q: Is Bubsy's return a sign of the apocalypse?
A: Pretty sure that's a no, but who really knows? People seem to like post-apocalyptic games, so if anything that just means we'll have more of those.

Q: What does the future hold for Bubsy?
A: If we told you, we'd have to...well, let's just say there's more in the works, but we don't want to let the cat out of the bag.

Read More
Thanks for your overwhelming support!
November 20, 2015 - Dropkick | Montage

Thank you everyone for your support, feedback, questions and comments! #SaveBubsy has been bigger than we could have imagined.

We'll have another announcement soon answering some of your Frequently Asked Questions about #SaveBubsy, the Bubsy Two-Fur, and what the future may hold for that infamous Bobcat.

A brief answer to our most asked question to hold you over: Yes, this is real, and yes, Retroism's parent company Tommo, Inc. really does own Bubsy and Accolade.

Read More
Description
Release date: Late 2015
Can Bubsy rise from the ashes? Cast your vote to #SaveBubsy and begin his journey to redemption!

Accolade’s most notorious character had not been seen since an ill-fated venture into 3-D. Out of the blue, he showed up at Retroism’s doorstep, bedraggled and mumbling about being doomed to a legacy of shame and obscurity. But we’ve cleaned him up and given him a new lease on life, a shot at returning to the big time – but he’ll need your support!

Bubsy’s journey to redemption begins with your vote to bring two of his 2-D games to authorized digital download for the first time in the Bubsy Two-Fur on Steam. With your support, Bubsy may finally be able to look himself in the mirror and smile, carry himself with dignity, and perhaps find the strength within to go on new adventures again…

BUBSY in: CLAWS ENCOUNTERS OF THE FURRED KIND:
"I'm Bubsy. I'm tryin' to save the Earth from Woolies. No, Woolies aren't what you get from wearing cheap underwear! Woolies are space dweebs in flying saucers out to purrloin the Earth's supply of yarnballs. But enough about them. Let's talk about me!"

BUBSY II:
Defeat droves of dive-bombing penguins! Squash squadrons of flying pigs! Trash tons of turbo-powered sheep! It's all waiting for you in this wacky, whirlwind adventure through the Amazatorium!
< >
1,056 Comments

What? I can't fucking read. Aug 20, 2017 @ 9:16pm
"With your support, Bubsy may finally be able to look himself in the mirror and smile, carry himself with dignity, and perhaps find the strength within to go on new adventures again…" UM