Store Page
Arma 3 >  Workshop > woesinger's Workshop
This item has been removed from the community because it violates Steam Community & Content Guidelines. It is only visible to you. If you believe your item has been removed by mistake, please contact Steam Support.
This item is incompatible with Arma 3. Please see the instructions page for reasons why this item might not work within Arma 3.
Current visibility: Hidden
This item will only be visible to you, admins, and anyone marked as a creator.
Current visibility: Friends-only
This item will only be visible in searches to you, your friends, and admins. 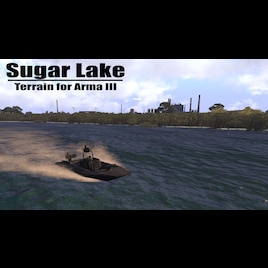 woesinger
Offline
See all 489 collections (some may be hidden)

This item has been added to your Subscriptions. Some games will require you to relaunch them before the item will be downloaded.
Description
by Major Desync (AKA Woesinger)

Background:
Sugar Lake is a township in the Vieilhomme Delta. A hub for oil exploration and extraction, Sugar Lake has extensive port facilities servicing a number of oil rigs and refineries in the surrounding wetlands. These include the Sugar Lake Oil Field, owned and operated by Vrana Petrochemicals, a division of the multinational conglomerate Vrana Industries.

Given the strategic importance of these assets, Sugar Lake is home to two recently requisitioned military installations - Joint Air Facility (JAF) Sugar Lake (formerly Sugar Lake “International” Airport) and Camp Burnside (formerly Sugar Lake Marina). The military detachments in these bases are supported in local security and counterinsurgency actions by a number of private military contractors (PMCs). The most prominent of these is Ion Services, which operates out of an extensive facility in the port.

The security provided by these forces has encouraged the government to locate several of its displaced persons (DP) camps in Sugar Lake, housing citizens internally displaced by the virulent insurgency that wrack the country. Some of these refugees have voluntarily fled conflict zones, others have been resettled as a result of Ward of the Government Orders. Corporate Social Responsibility Pacts with a number of private enterprises, including Vrana Industries, provide these refugees with welcome opportunities to supplement their subsistence allowances with Productivity Credits by working in the local oil and port facilities. Insurgent and other criminal groups have tried to exploit the DP camps as recruiting grounds, but thanks to the vigilance of the government, the military and their PMC security partners, their efforts have been unsuccessful thus far.

The Vieilhomme Delta is a maze of bayous, channels and watercourses of varying size, and low-lying islands covered with tall marsh grass and patches of dense forest. The wetlands are infested with a number of anti-government militias. According to government sources, several of these insurgent groups are proxies for foreign states and non-state actors bent on the destabilisation of the country. Moreover, many insurgents are affiliated with international organised crime syndicates, who have made Vieilhomme Delta a highway for narcotic and arms, and human trafficking.

Sugar Lake’s size, topography, ground cover, and locations make it perfect for amphibious operations involving boats, subs, and divers, and/or airmobile elements, as well as counterinsurgency search-and-destroy missions, and/or insurgency raids against military or industrial infrastructure and/or personnel. The various oil and port installations are suitable for close combat and MOUT. This is not an ideal map for extensive armoured maneuvers, aside from convoys. However, Sugar Lake does offer a chance for amphibious vehicles to shine.

REQUIRED Addons: CUP Terrains OR All in Arma Terrain Pack (note AIATP is no longer being updated, so CUP Terrains is recommended)

Known Issues:
1: The row of buildings at grid 056978 has a weird lighting glitch, where they do not appear to reflect the ambient artificial light after dark. However, it will reflect vehicle lights, and lights placed via Zeus.
2: A3 water is invisible through A2 windows, which gives players x-ray underwater specs when looking through them.
3: Since v1.2, running Sugar Lake with All in Arma Terrain Pack, produces an annoying, but harmless error message requiring the CUP_Ca_Plants_E2 addon when launching Arma 3. Select OK to close the message and resumes the game launch. As of this release, Sugar Lake is still fully compatible with the All in Arma Terrain Pack.
4: Some of the A2 trees do not play nice with the new A3 lighting.


Credits & Thanks:
Silola for the outstanding X-Cam mod, with which most of the objects in this terrain were placed, and without which this terrain would have been delivered in multiples of the time and fractions of the quality.
CAPTNCAPS (teamproskill) and FSF for their ever helpful Terrain tutorials.
Bushlurker, M!lkman, Jakerod, Uro, Aus, and the many others who offer help and advice in the Arma 3 Terrain forums.
Mikero, whose tools underwrite most of the the Arma modding community.
Gav for alpha testing.
BIS for producing the Arma series.

agent barack Apr 11 @ 6:04pm
dropping in the year 2022 to say this map is underrated and excellent

HKurban Mar 16, 2020 @ 12:21am
Love this! One of the few maps that could really pass for somewhere in the US, specifically coastal Louisiana or Mississippi. On top of that it's a very unique terrain with its own challenges, and nothing on the map really feels forced or too out of place. Well done!

GIB CHECHENS Feb 18, 2019 @ 6:43pm
Totally gorgeous map, love just driving around it in the old UAZ and jumping over canals and ditches. Total blast. Could be an easy proxy for a Special Economic Zone in W. Africa/SE Asia or Latin/S. America, or maybe just a particularly modern area. Are you still working on it?