Greenlight > Games > McSyko's Workshop
Greenlight is being retired. For more information on how to submit games to steam, refer to this blog post.
This item has been removed from the community because it violates Steam Community & Content Guidelines. It is only visible to you. If you believe your item has been removed by mistake, please contact Steam Support.
This item is incompatible with Greenlight. Please see the instructions page for reasons why this item might not work within Greenlight.
Current visibility: Hidden
This item will only be visible to you, admins, and anyone marked as a creator.
Current visibility: Friends-only
This item will only be visible in searches to you, your friends, and admins.
Cosmic Leap
Description Discussions1 Announcements2 Comments85 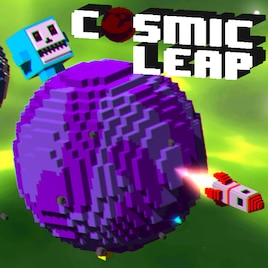 McSyko
Offline
See all 14 collections (some may be hidden)

View Cosmic Leap in the store

It's been a few months since the game has been Greenlit, so here's an update on progress and what's still outstanding.

Firstly, here's a trailer showing off some of the work done:
YouTube video

Here's a quick rundown of what's been added:

In addition to that there's been lots of little tweaks, polishing and testing to make the game better.

Now for what's outstanding, I just need to do the Steamworks integration - with trading cards, achievements, and cloud save. I also need to properly test the Mac and Linux ports. Once this is done, along with some extra tweaks along the way, the game will be ready for release.
I'd rather spend a little extra time to release a solid game, than rush to release a buggy mess - so hope people understand that.

As you may have noticed, Cosmic Leap has been given the Greenlight. And in 15 days no less, which really surprised me.

In the coming weeks, I'll be tweaking the game for a release early next year.
I'm planning on adding more content, as well as integrating Steamworks features (like achievements, trading cards, and cloud save), as well as just a heck of a lot of spit-n-polish on what's already there.
I'm currently working on making the game more controller friendly.

Thanks for the feedback and support!

Read More
Description
Release date: 1 November 2015
Time your jumps from planet to planet, avoid the obstacles thrown in your path and blast off to safety with your rocket ship!
Play through 90 levels that will test your reaction skills!

Are you COSMIC enough to clear all the levels?!? Can you collect all the coins? Can you finish the levels while the counter is still warming up? Can you beat the NIGHTMARE levels? Then, and only then, can you call yourself, truly, COSMIC!

javierucu Feb 11, 2016 @ 1:30am
Hi, I am a newbie soundtrack composer. I made a demo reel. Do you think my music is good enough for your game? https://www.youtube.com/watch?v=pA7fQzZ9gUU Thank you, sincerelly. cga.sound@gmail.com

McSyko  [author] Jan 14, 2016 @ 9:04am
I've been on holiday, but I'm working on it.
I've added more characters and full controller support.
Still have more level content to add and bugs to fix.

Cosmic Leap has been Greenlit and is now listed in the Steam store. For the latest information, purchase options, and discussions for Cosmic Leap, please see it on the Steam Store or in the Steam Community.
Visit Store Page
For more details Visit Community Hub
For latest discussions
If you really, really want to, you can continue to the Greenlight page. Information on this page may be out of date, since all the action has moved to the areas noted above.