Greenlight > Games > SolitaireBliss's Workshop
Greenlight is being retired. For more information on how to submit games to steam, refer to this blog post.
This item has been removed from the community because it violates Steam Community & Content Guidelines. It is only visible to you. If you believe your item has been removed by mistake, please contact Steam Support.
This item is incompatible with Greenlight. Please see the instructions page for reasons why this item might not work within Greenlight.
Current visibility: Hidden
This item will only be visible to you, admins, and anyone marked as a creator.
Current visibility: Friends-only
This item will only be visible in searches to you, your friends, and admins.
ComixPlay #1: The Endless Incident
Description Discussions1 Announcements5 Comments255 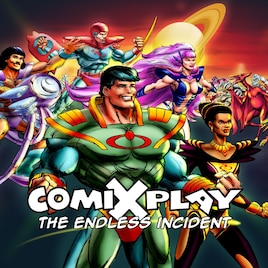 SolitaireBliss
Offline
See all 8 collections (some may be hidden)

View ComixPlay #1: The Endless Incident in the store

We are happy to announce that the game is now available for purchase.
http://store.steampowered.com/app/425040/

Hi guys,
We are very excited to announce that ComixPlay will launch on Steam this Wednesday, February 24th!
We spent the last few months polishing the game, and really hope you'll like it.

Read More
Description
Release date: Early 2016
Bringing Comics Back to the Forefront of Pop Culture!
ComixPlay is a 124 page digital Graphic novel where the player controls the heroes in turn-based combat.
Each time the Solar Defenders engage in a fight, you can dive in and play the battle (or continue reading and play later on).
Each Solar Defender has its own superpowers and abilities, along with special interactions that are only possible between specific members of the group.

Storyline
2116 AD: A menace from beyond the stars threatens the entire solar system and only the new genetically enhanced team of heroes, the Solar Defenders, can save it.
That is -- if they can conquer their self-doubt and stop jealously fighting amongst themselves. As they chase their powerful and implacable foe from distant Pluto to all the way back to Earth itself, it becomes clear that they can no longer be sure that the people around them are still human
- not even themselves!

The Team
ComixPlay was written and developed by a team of comics artists and fans -
Al Sirois (Writing, Ink), who has worked for Marvel and DC, and is best known as a former assistant to comics great Wallace Wood.
Zach Bassett (Pencils) who has worked for Arcana, Zenescope and Bluewater.
Colors by Wesley Wong whose past credits include color restoration for the Marvel Masterworks line of books.
The game features original music composed by Hagai Izenberg

javierucu Feb 11, 2016 @ 1:32am
Hi, I am a newbie soundtrack composer. I made a demo reel. Do you think my music is good enough for your game? https://www.youtube.com/watch?v=pA7fQzZ9gUU Thank you, sincerelly. cga.sound@gmail.com

ComixPlay #1: The Endless Incident has been Greenlit and is now listed in the Steam store. For the latest information, purchase options, and discussions for ComixPlay #1: The Endless Incident, please see it on the Steam Store or in the Steam Community.
Visit Store Page
For more details Visit Community Hub
For latest discussions
If you really, really want to, you can continue to the Greenlight page. Information on this page may be out of date, since all the action has moved to the areas noted above.