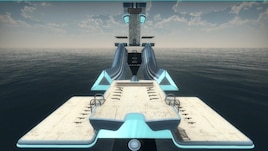 GamingRevenant (GamingReviewsYT)
Offline
See all 722 collections (some may be hidden)

This item has been added to your Subscriptions. Some games will require you to relaunch them before the item will be downloaded.
Description
surf_greatriver_2015
2015 was a great year for Source, which is why I decided at that time to redesign one of the most popular surf maps of all times: surf_greatriver (by Black). There are a few reasons why I felt this remake was necessary:

1. The original map lacked many aestethic appeal. I decided to give it my abstract, freeminded design with a modern coat to it.
2. Nearly All ports have been more or less unsuccesful. Some that are succesful are still riddled with water problems and lighting errors.
3. I have always wanted to remake a map, preferably a surf map in order to boost and support the surf community on Global Offensive. With that said, the last update to this map signed the end of my personal free input and time for the surf community.

Changes
Greatriver 2015 tries to simulate a (sc)ion-like, futuristic feeling in an otherwise wordly setting, taking into account the name it bears by the inclusion of rivers and the wide open sea as skybox. I wanted to respect nearly everything of the original greatriver in terms of technicals and movement, so I didn't went crazy in renewing the ramps completely or adding new gimmicks or things that would derive from the original gameplay.

A few changes however should be listed right here:

No more 3D skybox elements. The hill is, and will always remain ugly. In my opinion it plays an insignificant role in visuals and gameplay (at least in this version), so I removed it. The MyPlex logo was also removed and all forms of clan-advertisements were eradicated.
Due to a majority of dislikes towards both the grenade room and the lasers in jail, I decided to remove them. They play no part in the concept of surf and are purely there for imbalancing the skill in surfing.
Undershotty has been removed. Unfortunatly this might be a controversial change, and is probably the only big change compared to the original xDre4m version.
Cubemaps, water reflections, soundscapes and additional sounds have been added. Radar and optimised navigation file are available and a loading image + description are included.
Respawnable weapons included as of v1_1. Only weapons with an effect are respawnable. Trolling by picking up and throwing away weapons is impossible, as there are weapon_managers in the map for every (respawnable) weapon available.
Fixed ramp errors on models by tweaking the collision models. No sudden stops are possible anymore.
Fixed teleport bug that would randomly teleport you from bottom to either top or top of garage. It should only teleport to top as it does now.
Fixed jaildoor bugging out when both buttons were used simultaneously. No conflicts possible, and the animation now plays accordingly.
Added particle effect under the waterfall. Will ONLY work on servers that have a precacher plugin (just like zombie escape servers have).
Final graphical improvements have been added (including tweaked lighting from the sun as well as lights in garage and jail, HDR tonemap controller and bugged brushfaces).

Future
This maps' latest improvements and suggestions from other players has been included. I have been cooperating with a professional surf player whilst designing the new version, but that shouldn't keep anyone from going forward and voicing their opinions. Any future changes are, as of the latest update, unlikely to happen. Should you (client or clan) wish to see some significant changes, then I'm open for discussion.

Should a clan wish to have his/her own version of surf_greatriver_2015, then please contact me. No derivates are allowed to be made. Ports are also not allowed, I will be porting the map myself to CS:S, in which case it will have its own page.

Hope you enjoy the map, and see you in the comments section below!
Popular Discussions View All (8)

Surf professionals and feedback (Explanation behind the changes!)
GamingRevenant (GamingReviewsYT)

GamingRevenant (GamingReviewsYT)  [author] May 12, 2020 @ 6:08am
@ViberWhomVibes No, this IS a combat surf map. This map is old as balls, it's a remake from the original one on 1.6 and Source, and is quite simply the most popular combat surf map that has ever existed :P this is not ment to be played solo and not ment to be surfed as fast as possible.

GamingRevenant (GamingReviewsYT)  [author] May 10, 2020 @ 10:08pm
@ViberWhomVibes, you do realise this is a surf map, right? I don't think you've grasped the idea behind the map's design XD