Store Page
Dota 2 >  Workshop > Dota 2 Official's Workshop
This item has been removed from the community because it violates Steam Community & Content Guidelines. It is only visible to you. If you believe your item has been removed by mistake, please contact Steam Support.
This item is incompatible with Dota 2. Please see the instructions page for reasons why this item might not work within Dota 2.
Current visibility: Hidden
This item will only be visible to you, admins, and anyone marked as a creator.
Current visibility: Friends-only
This item will only be visible in searches to you, your friends, and admins. 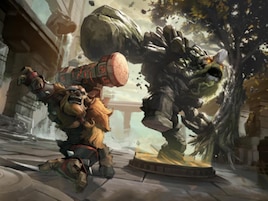 This item has been added to your Subscriptions. Some games will require you to relaunch them before the item will be downloaded.
Description
http://www.dota2.com/hauntedcolosseum/

Traps:
• Use the traps located throughout the map to keep your enemies from capturing Control Points.
• Fire Traps, Venom Traps, Boulders and the Pendulum are activated by buttons. Teams can only activate the buttons on their side of the map.
• Spike Traps are activated by stepping on them.
• The Pendulum, Boulders and Spike Traps will damage all heroes regardless of who activated them.
• Fire Traps and Venom Traps only damage enemies of the hero that activated them.

Tips:
• Choose heroes who work well in team fights to confront the enemy at Control Points.
• Use your team's Waypoint to teleport from the spawn pool toward the central Control Point.
• Killing a hero will cause them to drop Rejuvenation Potions, Mango Juice, and Gold Coins.
• Using Glyph will temporarily block all Control Points from being captured, and from granting Team Points.
• Behemoths are immune to Magical Damage, and have True Sight.
• Heroes can block enemies from activating Trap buttons.

Scout Jun 16 @ 5:15pm
Waiting for the appearance as a weekend spotlight