Store Page
Tales of Zestiria > Guides > Kaldaieℵ₀'s Guides
This item has been removed from the community because it violates Steam Community & Content Guidelines. It is only visible to you. If you believe your item has been removed by mistake, please contact Steam Support.
This item is incompatible with Tales of Zestiria. Please see the instructions page for reasons why this item might not work within Tales of Zestiria.
Current visibility: Hidden
This item will only be visible to you, admins, and anyone marked as a creator.
Current visibility: Friends-only
This item will only be visible in searches to you, your friends, and admins.

Tales of Zestiria "Fix" - Community Patch
By Kaldaieℵ₀ and 1 collaborators
This project fixes:
It also adds:

Comments
Problem Description
While this is a very respectable port, especially for a first-attempt at this platform, it does have some issues.


The generally accepted solution for audio problems is to edit your system-wide speaker settings to accommodate the game. That is very inconvenient and in some cases impossible, so a fix that only affects this game is desirable.

Everything else listed above is impossible to fix without a patch (be it community or official).
Download and Install
The Smart Way

(Strongly Discouraged — Requires 7-zip Software and Easy to Mess Up)

This mod requires the (x86) version, grab the installer here.[www.microsoft.com] 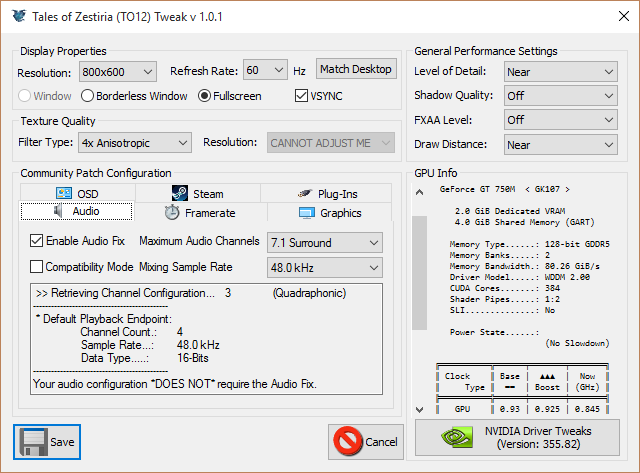 Please stop by the development thread for a more thorough discussion of this project; it is here.

Configuration
Odds and Ends
The preferred method of configuring the community patch is the in-game config menu (Ctrl + Shift + Backspace) With it you can quickly enable/disable and configure most of the features. 3rd Party Plug-In (e.g. ReShade) support is not implemented yet, but everything else is.

To use ReShade, you must manually edit d3d9.ini and add the following lines:

[Import.ReShade] Architecture=Win32 Filename=ReShade32.dll When=Proxy Role=d3d9
This will resolve conflicts between my injector (d3d9.dll) and ReShade (which usually needs to be named d3d9.dll as well). Rename ReShade's d3d9.dll to ReShade32.dll and it will happily work.
On-Screen Display

Changes made using hotkeys are saved in osd.ini at (normal) game termination.

Incompatible Software
Certain third-party software is known to be incompatible with TZFix. 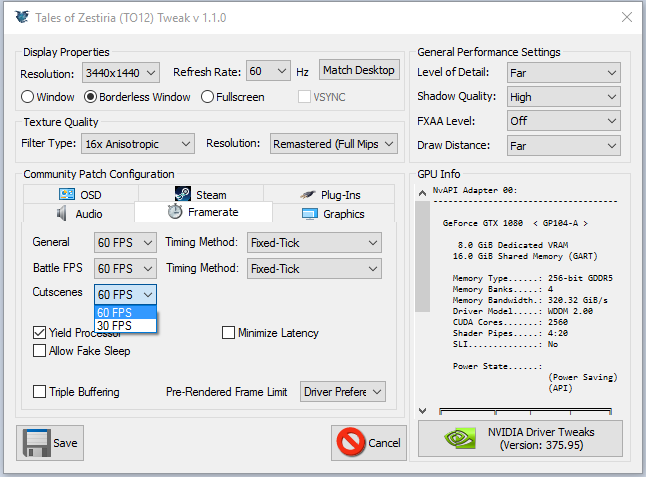 The game has problems with timing during cutscene camera transitions at 60 FPS.

These are purely visual problems, but if they bother you the mod supports running cutscenes at 30 FPS and everything else at 60 FPS -- use the config tool to set this up under the Framerate tab.

VSYNC in Version 1.1.0
Beginning with 1.1.0, the framerate limiter is built-in to the software and is no longer based on VSYNC or a driver-based limiter (NVIDIA). All versions since the 60 FPS option was introduced forced VSYNC on and this is the first version that does not do that.

The unmodified game itself has a known issue related to VSYNC where changing this setting in-game does not stick until you restart. If you notice tearing in 1.1.0 and did not before you probably need to turn VSYNC on in-game and restart the game.

Alternatively, you can override the game's VSYNC settings by editing d3d9.ini

[Render.D3D9] PresentationInterval=1
Troubleshooting
The fix may not work in all cases. If after installing this fix, problems persist, please paste the output of logs/crash.log, logs/tzfix.log, logs/d3d9.log, logs/preloads.log and logs/audio.log to pastebin.com and leave a message in this fix's development thread so that I can debug the problem.
< >
1,164 Comments

Zangato May 31 @ 6:46pm
Beautiful SKIM64 does no work, i click on it an nothing happens

Grim(CW) Apr 17 @ 12:33pm
Gias fix still works. Looks like the same file, isn't, and it actually can launch whereas the original above doesn't.

Corrie Apr 10 @ 4:32pm
I installed the fix through skim64 a while back and now trying to run it again and it just says the game is not installed as if it's not finding the folder. Any idea why?

kaejivandar Nov 17, 2021 @ 8:47am
worst game ever seen couldn't play it because mode no take in charg for my screen and can't change anything in parameter

なるみん Oct 4, 2021 @ 5:35am
Good evening. I have a question for you.
After installing this fix, I was able to start the game, but the character's movement speed is too slow for me to be able to run.
Is there anyone who knows how to fix this?

run SKIM64 -- the one you just downloaded from the Special K wiki link
(it will also say "Special K Install Manager - (v 0.7.5.15)" on the title bar after launching it)

then select and install Tales of Zestiria "Fix"

if you're having crashing issues in-game with that version somehow, then try Tales of Zestiria "Fix" v1.8.0 from the following link-
https://github.com/Kaldaien/TZF/releases/tag/tzf_180