Greenlight > Games > Nonadecimal's Workshop
Greenlight is being retired. For more information on how to submit games to steam, refer to this blog post.
This item has been removed from the community because it violates Steam Community & Content Guidelines. It is only visible to you. If you believe your item has been removed by mistake, please contact Steam Support.
This item is incompatible with Greenlight. Please see the instructions page for reasons why this item might not work within Greenlight.
Current visibility: Hidden
This item will only be visible to you, admins, and anyone marked as a creator.
Current visibility: Friends-only
This item will only be visible in searches to you, your friends, and admins.
Automata Empire
Description Discussions0 Comments19 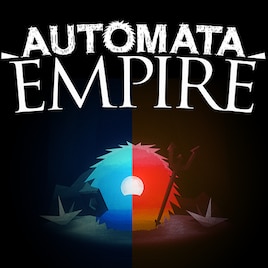 Nonadecimal
Offline
See all 4 collections (some may be hidden)

View Automata Empire in the store

Store page
Description
Release date: 11//2015
Seize power as the self-declared ruler of a tribe of fuzzy automonsters! Herd them into larger groups and sacrifice them to build taverns, roads, and armories to expand your empire. Or when things get crowded, build a high-velocity catapult to launch your subjects into enemy territory and gain dominance over the toroid.

Automata Empire was inspired by cellular automata simulations and Conway's Game of Life where binary cells are born and die on a grid, governed by simple rules. Despite the simplicity, specific cell configurations can produce complex behaviors and grow into flourishing ecosystems. Expanding on this concept, Automata Empire's non-binary monsters lack individual intelligence, but gain more complex behaviors by grouping into larger packs. As their leader you can herd them into larger groups by building infrastructure like roads, walls, taverns, and far-reaching catapults.
< >
19 Comments

psymin Oct 28, 2015 @ 1:02pm
Even though your last game promoted ideologies that I disagree with, I'm still interested in buying this game :) Celebrate diversity :)

Automata Empire has been Greenlit and is now listed in the Steam store. For the latest information, purchase options, and discussions for Automata Empire, please see it on the Steam Store or in the Steam Community.
Visit Store Page
For more details Visit Community Hub
For latest discussions
If you really, really want to, you can continue to the Greenlight page. Information on this page may be out of date, since all the action has moved to the areas noted above.