Greenlight > Games > Campfire Games's Workshop
Greenlight is being retired. For more information on how to submit games to steam, refer to this blog post.
This item has been removed from the community because it violates Steam Community & Content Guidelines. It is only visible to you. If you believe your item has been removed by mistake, please contact Steam Support.
This item is incompatible with Greenlight. Please see the instructions page for reasons why this item might not work within Greenlight.
Current visibility: Hidden
This item will only be visible to you, admins, and anyone marked as a creator.
Current visibility: Friends-only
This item will only be visible in searches to you, your friends, and admins.
War of Rights
Description Discussions63 Announcements23 Comments823 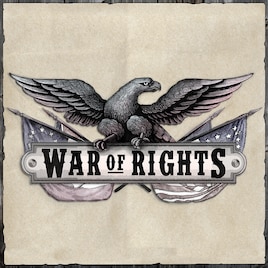 View War of Rights in the store

Store page
Recent Announcements View All (23)
Field report 26: Drill Camp
March 28, 2016 - [CG]TrustyJam
Hello and welcome to our twenty-sixth field report!
Today, we have some exciting news as well as quite a lot of new content to show you all! Let's begin with an announcement.

Technical Alpha "Drill Camp" available soon!
We're pleased to announce the existence of our technical alpha "Drill Camp." This early version of the drill camp - which was reached as a stretch goal during our crowdfunding campaign - will be available for our captain tiered backers and upwards on Steam soon! Lower tiered backers will get access to the Drill Camp whenever they get access to the game: Skirmishes phase 2, early access or release depending on their pledge tier. The Drill Camp will feature a complete Civil War era army camp in a Maryland-esque setting, full of forested areas as well as rolling countryside hills and fields for the players to explore together. Other features include a firing range for the players to practice their aiming techniques as well as bayonet training grounds where the players can wage an all out war against the mighty sandbags. The technical alpha marks the very first and earliest point of planned test phases for War of Rights, and as such, will be highly limited and rough in its current form. It is our plan to keep on updating the Drill Camp as development continues throughout the coming months.

Here's a short announcement video created from the last playtest session we had featuring a couple of developers and our Historian pledge tier backer. You'll also notice a section of a new music track in the video – the first piece created by Markus Schmidt as part of the War of Rights Soundtrack. Enjoy!

Access given to the Drill Camp is going to be given in waves to ease the serverload, making us able to set up more servers and allow us to do a bit of controlled stress testing before we let everyone in from the Captain tier and up. Your pledge amount will determine which round of invites you'll be in.

Below are a few in-game screenshots of the Drill Camp. We look forward to be training with you soon!

Union Officer Corps
Another exciting update we wish to share is our first inclusion of officers! Officers could range from having previously been members of the aristocracy or government, or perhaps were proud alumni of one of the various military academies throughout the country. Regardless of their background, officers are important parts of the military structure, and will continue to be so in War of Rights. Here is the second part in the cinematic series “The Fighting Men of War of Rights” created by Hinkel, our community manager as well as primary media creator. Take a look!

Just as with the lower ranks, we will be supporting officer clothing and equipment variations to allow each player to play as an individual. Of similar and important note, we will also seek to use cloth simulations. While this might have been known for flags, it is even more exciting to see that this technique is also available for the clothes your character wears!

Another important part of an officer's equipment was his sword. Since medieval times, swords have had a connotation of power and authority, and the 1850 Foot Officers Sword was designed to be an ultimate representation of that. Take a look at the work of our wonderful artist Stuart who has been hard at work at it!

Another important update and juicy new toy that will be featured in the game is the Remington 1858 New Army Model Revolver. The main contender to the gargantuan powerhouse that was the Colt Patent Arms Company. Many on both sides preferred its structure and ease of reloading, and you too can now get a chance at finding your own preference with this beautiful digital recreation.

Just as the officers had swords as a symbol of their authority, so too did the non-commissioned officers, in the form of the M1840 NCO sword. The design was originally copied from the French, but it remained a weapon used by the US army even today. Now see it for your own eyes.

As a final teaser of what will be included in the game, we thought we might also include the work of the person known as A.P. Hill on the forum, who has been a monumental help as a co-historian with a vast wealth of knowledge and source material, as well as a modeler for our artillery and wagons and Frederik, 3D and 2D artist as well as a founding member of Campfire Games. Here we showcase the beautiful and plentifully-seen 3-Inch Ordinance Rifle, one of the most common artillery pieces to be seen during the Civil War. At Antietam alone there were around 140 of them between both sides, and for good reason! They were well liked for their reliability, as well as their incredibly accurate range of 1 ½ miles! Take a look at the excellent work below.

It is now possible to opt out of the game credits should you want to in the “Change reward options” on the website.

That's about it this time. We hope you liked what you saw and we cannot wait to start drilling with you, our loyal backers, who have made this project a reality. As we get closer to the release of the initial version of the drill camp, we'll be sure to let you all know the date of which it's going live and detail how the pledge tiers have been distributed throughout the different invitational waves.

Until next time, have a good one!
Read More
PayPal pre-orders are possible now!
December 12, 2015 - Hinkel
Update On Funds And Stretch Goals
We wanted to let everyone know that the Kickstarter funds have been collected and we’re currently busy transitioning from a three year "spare time" project into one with funds behind it - all thanks to you, our wonderful backers!

Paypal pledge and raise pledge option now available
We have just introduced an option for backers to raise their pledge if they either pledged on Kickstarter or on PayPal at our site.

You can also pre-order via Paypal now at: 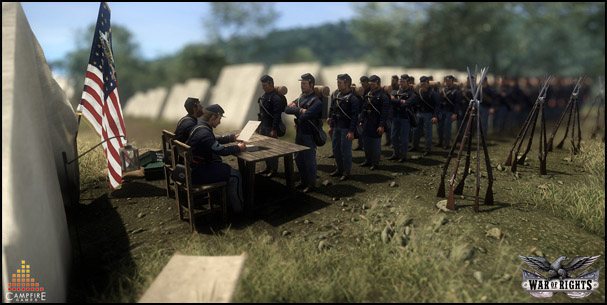 Read More
Description
War of Rights is a multiplayer game set during the perilous days of the American Civil War, in the Maryland Campaign of September, 1862. Campfire Games is devoted to presenting the gruesome and glorious elements of the period, while maintaining the highest level of historical accuracy and realism as is possible with the wonders of CRYENGINE.

Players in the game will be able to play on multiple battlefields of the campaign, from the confluence of the Potomac and Shenandoah Rivers where the Siege of Harper's Ferry took place, to the ridgelines of South Mountain, and to the meandering waters of Antietam Creek at the Battle of Antietam. Additionally, players will also be able to choose from a list of regiments that fought in each battle as well as what rank to fight as, whether they want to slog it out as a lowly private, or if you want to orchestrate the carnage and mayhem as a major general.

Uniforms and bodily features will all be customizable for other players to see as you march and fight in the lines of battle according to the tactics of the period. As a General, you will operate in your headquarters equiped with a map of the battlefield and constantly receiving reports of friendly and enemy positions. Send out new orders to the regiments to move forward, or fall back - all in real time. The orders will move down the chain of command, to the Colonels, Majors, down to the Captains in charge of the individual regiments, all of whom have the option to follow the orders of their trusted commander, or rebel against his wishes and fight as you see fit.

Each map contains a period reconstruction of the buildings, farms, forests, roads & rocks that existed so players can fight through the streets of Harper's Ferry, in the wooded heights of Fox's Gap at South Mountain, or in the wheatfields and Bloody Lanes of Antietam. Players can feel the whiz of deadly shot and shell fly by their bodies, or hit their comrades or themselves as they scream in a bloody hail from their wounds. Limbs will fly and blood will be spilt once again as Campfire Games brings the fighting of the Civil War right to the player's computer screen!

Will you heed the Union call against the traitors? Or will you fight to defend your family and livelyhood with the Confederacy? You decide!
Popular Discussions View All (63)

Will there be female in War of Rights
Richardjohn

Gestapo Nov 24, 2016 @ 1:38pm
Hello, I present channel is YouTube and want to make your game on the video does not help with the key?
https://www.youtube.com/user/GemigChannelFrost

Gestapo Sep 5, 2016 @ 7:17am
Hello, I present channel is YouTube and want to make your game on the video does not help with the key?
https://www.youtube.com/user/GemigChannelFrost

STIPY Aug 12, 2016 @ 9:29am
Sadly money is tight for me. But should it ever lossen up I'll certainly donate! This game looks amazing to me! Especially as a military history major and buff! I'm an enlisted soldier seeking an commission at senior military college(In Texas and I'm from New York). It's interesting seeing how over a 100 years later the civil war still echo's in some parts of the US.

War of Rights has been Greenlit and is now listed in the Steam store. For the latest information, purchase options, and discussions for War of Rights, please see it on the Steam Store or in the Steam Community.
Visit Store Page
For more details Visit Community Hub
For latest discussions
If you really, really want to, you can continue to the Greenlight page. Information on this page may be out of date, since all the action has moved to the areas noted above.