Store Page
Garry's Mod>  Workshop > youmenow1's Workshop
This item has been removed from the community because it violates Steam Community & Content Guidelines. It is only visible to you. If you believe your item has been removed by mistake, please contact Steam Support.
This item is incompatible with Garry's Mod. Please see the instructions page for reasons why this item might not work within Garry's Mod.
Current visibility: Hidden
This item will only be visible to you, admins, and anyone marked as a creator.
Current visibility: Friends-only
This item will only be visible in searches to you, your friends, and admins. 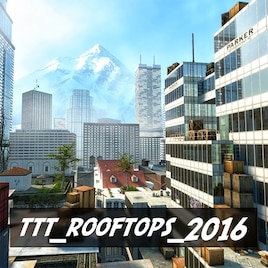 youmenow1
Offline
See all 71907 collections (some may be hidden)

This item has been added to your Subscriptions. Some games will require you to relaunch them before the item will be downloaded.
Description
Placeholder trailer re-upload: https://vid.me/LyHQi

TTT_rooftops_2016 has arrived, bringing with it an immense number of additions, enhancements and changes to both the visual and mechanical.
After years of development, I am glad to finally introduce ttt_rooftops_2016, the definitive ttt_rooftops version for 2015 and beyond!

This is no ordinary update, this overhaul is the result of 2 years of production and beta testing.

Here is what you can expect to see in ttt_rooftops_2016:
The map has received a graphical overhaul, new buildings, features and events, as well as enhancements and changes to almost all components of the map. The changes are too great in number to list specifically, so instead they will be presented in a summarized format for ease of reading purposes:

Overhauled graphics and skybox:
With enhanced props, textures and greatly improved lighting and geometry, the map has seen a complete graphical overhaul that takes advantage of Source Engine lighting techniques not commonly found in most Gmod maps. These include HDR, reflective cubemaps, increased shadow resolution and vertex based lighting/shadowing and more. The results are a far more modern and eye pleasing outcome. Additionally, the skybox has been entirely overhauled, with the use of cloudy particle effects, custom textures, improved design/detail and a photo-realistic mountain.

New buildings and map extensions:
The map has seen the introduction of new buildings with rooftops_2016, including a new construction tower and upper-class garden building that provides a great map overview and sniping location. Certain parts of the map previously unreachable have now been included, such as the top of the H shaped tower (now parker building) and water-tower with ladders leading to the top. Many new interiors have also been added, which serve as hideouts or pathways to other parts of the map.

Lots of new features and events:
Features of many kinds have been added, ranging from a flooding event to a controllable flying elevator, a jukebox featuring 6 mystery songs to functional elevators (technology!), a traitor portal highway and much more!. The list goes on, but most will be left as a mystery for you to discover!

Refined layout and traversal:
The older parts of the map have seen changes too, with more possibilities of escape and descent from higher ground. The upper-map catwalk has been overhauled entirely with extra ladders and bridges leading from building to building. Map traversal has also seen refinements, with greatly improved ladders and tweaked prop/brushes making traversal from one point to another a little more seamless and less glitchy/disruptive.

Reworked Mechanics:
Lots of pre-existing mechanics have been reworked from the ground up, including the killer axe and destructible building. The Killer Axe is now locked inside a case with only certain conditions allowing access. When accessed, It now has two modes, the traditional (traitor) killer axe (with the extra ability to go invisible for 15 seconds!) and the (innocent) scanner axe, which reveals the scanned players role on contact with a 15 second cooldown. Other mechanics such as the destructible building and laser has been reworked too, but that will be left up to you to find out!

Tons of easter eggs and mysteries
Brimming with easter eggs scattered across the map, players will still be discovering new things months from release! Revealing them would only ruin the surprise, the fun is in the discovery!

Soundscapes and atmosphere improvements:
Dynamic soundscapes have been incorporated into the map, with background noises and atmosphere improvements that dynamically change from location to location; no longer is the map plagued with a single looping breeze sound! Additionally, new ambient sounds have been added across the map, ranging from the tweeting of birds to the constant sizzle of steaming pipes.

FAQ:
Q: What games are required?
A: CSS.

Q: Are you the developer of the original ttt_rooftops?
A: Yes.

Q: Is this an official update or an alternative vision?
A: Official update. This version is intended as a replacement for ttt_rooftops_a2_f1.

Q: Will there be more updates to ttt_rooftops_2016 coming?
A: Possibly, yes-no.. Maybe.

Q: Will this version run better or worse than ttt_rooftops_a2_f1?
A: Both. The framerate is far more stable than in a2_f1, but depending on your current position you will experience either an increase or decrease in FPS compared to previous versions. The map will continue to be optimized as time goes on though, so framerate will only increase with newer versions to come.

Q: Why is it so much bigger than a2_f1?
A: The map features a fair amount of custom content, as well as higher quality and more advanced lighting methods. This I believe is worth it, as it has allowed the map to achieve far higher potential than just using standard assets and basic lighting techniques. Hopefully you will agree.

Q: Did this update REALLY take you 2 years to produce?
A: Yes, this was the result of lots of changes and reworks over that period of time, as well as an on/off development schedule.

Q: What if I prefer simpler, more traditional maps like rooftops_a2_f1 but want the graphical and layout changes seen in rooftops_2016?
A: Don't worry, I've got you covered! After the main version of ttt_rooftops_2016 has been finished, I will be moving onto ttt_rooftops_2016_lite! Check below for more details.

(More to be added as questions are asked!)

ttt_rooftops_2016_lite
If you're the kind of player who prefers a simpler, more traditional and static experience, ttt_rooftops_2016_lite is for you! This version will feature most of the graphical, mechanical and layout improvements incorporated into ttt_rooftops_2016, minus a lot of the newer events and easter eggs that may take the focus away from the core TTT gameplay or deem too complicated. The lite version will also see a slightly smaller filesize and decreased server impact.
Further down the line I will be creating a thread seeking suggestions on what to and what not to include in ttt_rooftops_2016_lite. So stay tuned!

Author contact information
Contact me via either one of these two links:
My Steam Group
My Steam Profile

Regarding Donations
If you like what I've done, or wish to provide a form of thank you or support for my current or future endeavors, I have provided the option to donate below. All donations will be greatly appreciated and provide immense help to my current circumstances.

To produce a map of this scale it takes a lot of time, practice and effort with no financial prospects in return. For the past 2 years, the development of this project has purely been the result of passion and dedication to hopefully supply others with something fun and enjoyable for all. If you enjoy the outcome and wish to provide some form of thanks, donations would be extremely appreciated.

Reichstaube Jan 15 @ 1:46am
Please add the name of the map file (ttt_rooftops_2016_v1) to the description so you can find it when people that are missing the file search for it.

and map is so tiny

Halcyon Dec 9, 2021 @ 6:52am
Man, this used to be my first addon, I was 10 years old at the time, 5 days after this map has released. Also, this time was when when my dad created my own steam account because I wanted to play Gmod because I thought it was fun, and this was 2 months before I got my first PC.When I got my first PC, my brother put all the games onto my library and I remember that I was so excited that I got my first PC ever, and that's about it. Btw, that time takes place on Xmas.