Greenlight > Games > AtomicTorch Studio's Workshop
Greenlight is being retired. For more information on how to submit games to steam, refer to this blog post.
This item has been removed from the community because it violates Steam Community & Content Guidelines. It is only visible to you. If you believe your item has been removed by mistake, please contact Steam Support.
This item is incompatible with Greenlight. Please see the instructions page for reasons why this item might not work within Greenlight.
Current visibility: Hidden
This item will only be visible to you, admins, and anyone marked as a creator.
Current visibility: Friends-only
This item will only be visible in searches to you, your friends, and admins.
Dinocide
Description Discussions3 Comments127 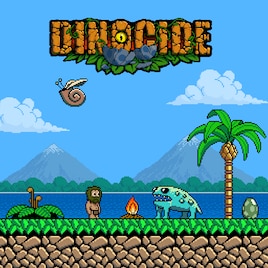 AtomicTorch Studio
Offline
See all 13 collections (some may be hidden)
Description
Release date: January, 2016
Dinocide is a classic NES inspired old-school single-player platformer in a prehistoric fantasy world.
Dinocide tries to capture the drive and fun of this era and recreate it in a modern way!

Description
The protagonist has to save his love interest who was kidnapped by an evil and mysterious Dinosaur God. You are accompanied by your own tame Dinosaurs, who act as a mounts, brother in arms and a true friends. With their help, you can jump higher, run faster, swim, fly and do a lot more things that an ordinary primitive man would never be able to do by himself. To reach your goal, you will travel together through the lands inhabited by ancient creatures and unknown dangers. You can download Dinocide demo from the official website - http://dinocide.com
You can also preorder the game - https://atomictorch.com/Store
And don't forget to visit our forums - http://forums.atomictorch.com/ First Impressions from the demo
Elo1121