Store Page
Space Engineers >  Workshop > LeonserGT's Workshop
This item has been removed from the community because it violates Steam Community & Content Guidelines. It is only visible to you. If you believe your item has been removed by mistake, please contact Steam Support.
This item is incompatible with Space Engineers. Please see the instructions page for reasons why this item might not work within Space Engineers.
Current visibility: Hidden
This item will only be visible to you, admins, and anyone marked as a creator.
Current visibility: Friends-only
This item will only be visible in searches to you, your friends, and admins. 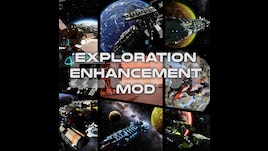 This item has been added to your Subscriptions. Some games will require you to relaunch them before the item will be downloaded.
In 1 collection by LeonserGT
Contributions to EEM

Huge thanks to all workshop authors, contributed in this mod - your creations is what making it unique!

What's new in this mod?

You're able to trade using new item "credits" as currency. For now it's just physical item in your inventory, without mass or volume.
Trading outposts and trader ships passing by are neutral unless you attack or grind them - any damage or missing blocks will cause triggering an alarm and calling for police.
Trading is made with in-game script by Mahtrok and his Project Exodus. Two types of trade ports: retail (personal use by hands) and commercial (with ship). Every trade terminal has collector to throw your goods or currency and connector to get offers, it also has menu screen and button terminal - use menu to choose item to buy and select its package: x1, x10 or x100. When you sell your goods or throw credits in collector it will appear as user's credit in the bottom of menu: you can watch how much money do you have during trading session. Bought items will be thrown out of trading port connector into your ship or near you. Click "cancel" to extract your money from user's credit via connector.
Follow trade route waypoints near one station to find trading another trade station!

You attacked trading station or civilian? Be ready to explain your actions to police (SEPD). Or better run, because they shoot first, then ask questions. Depending on distress signal level you can meet different police forces from police drones to Police Chief himself piloting G-201 "Devastator". Damaged police ships can and will call for reinforcements.

Shooting down cops? Tresspassing military objects or top secret research stations? Beware of military forces (UCMF). They always fly in wings or operative groups, including frigates and destroyers. Almost all military ships will call for reinforcements if damaged, so better run if you see these guys. No joking.

A lot of new cargoships and all of them will react if you attack them - calling for police and fleeing or engaging and fighting. Capturing cargoship now is more challenging, but also well rewarded. Huge variety of sizes - from small scout space bikes to huge Dromedary Trader and Atlant High-Security Transport.

More pirates! Now they're not just drones, but fighters, corvettes and frigates with pilots in flight seats. They also got some stealthy grinder drones and ships, mostly in ambushes - don't let them get too close! Most of pirate ships can call for help with certain chance.

WARNING! You must create your own faction with "accept peace" to make faction relations to you work as intended!

Factions has stations, cargoships and their own security squads.

Respawnships were updated to match new vision from survival update. They all equipped with survival kits and minimalistic layout otherwise.

Planetary drop pods replaced with simple rover, so you can drive around and find your spot to settle.

All content is based on workshop items marked with "Exploration" tag, all of them are modless.

Why? Because content quality is so much higher, when create with love and passion by many authors. Because one person is not able to fill entire mod with high-quality blueprints alone. Because, YOU, dear contributors, made a hell of a job and creations that good MUST find its meaning in game :)

Thanks again to all of authors, whose creations were used in this mod!
All authors with links can be found in a collection:
LIST OF USED ASSETS IN EEM

KNOWN ISSUES:
- faction relations will not work to player if he is not in custom faction - create a faction and click "accept peace"!

EEM nicely synergizes with two other mods from me: Vanilla Weapon Rebalance and X3 Soundtrack Mod

Do you wish to support mod?

Thinking about reupload?
No, you can't reupload EEM. No you can't change EEM. You're free to work with us on EEM if you'd like, but that's about it. Contact Thraxus about your concerns, if you have any.
Popular Discussions View All (141)

All Factions are Always Hostile towards players?
2muchgamez
< >
7,665 Comments

LoneGunman Jun 9 @ 3:49pm
@Darzamat: There's a mod in Thraxus's workshop that removes the EEM spawns and restores the vanilla ones.

Eagle-1 Jun 6 @ 12:30pm
True, but there is nothing in the mod description denoting whether it works seamlessly, glitchy or it breaks MES.

LoneGunman Jun 5 @ 2:28pm
That gets asked so often I almost think the mod should be renamed "[EEM] Exploration Enhancement Mod WORKS WITH MES" :)

Eagle-1 Jun 5 @ 2:01pm
Is is possible/advisable to mix this and Modular Encounters System? Or the Almighty Klang will bestow upon me ALL of his blessing? (everything breaks and my PC ends up on fire)?