Greenlight > Concepts > Kybernesis's Workshop
Greenlight is being retired. For more information on how to submit games to steam, refer to this blog post.
This item has been removed from the community because it violates Steam Community & Content Guidelines. It is only visible to you. If you believe your item has been removed by mistake, please contact Steam Support.
This item is incompatible with Greenlight. Please see the instructions page for reasons why this item might not work within Greenlight.
Current visibility: Hidden
This item will only be visible to you, admins, and anyone marked as a creator.
Current visibility: Friends-only
This item will only be visible in searches to you, your friends, and admins.
Paranormal Intelligence Bureau
Description Discussions2 Announcements3 Comments36 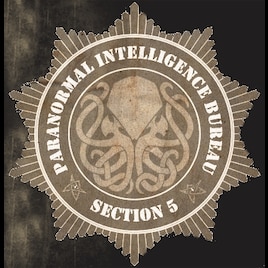 Kybernesis
Offline
See the collection (may be hidden)
Recent Announcements View All (3)
Introducing the first agent: The Soldier
November 24, 2016 - Kybernesis

One of our artists, Christer Sveen, of Funcom and Blink Studios fame, have finished the model of the first of our Agents: The Soldier.

The Soldier is a veteran from the Great War, where he served in the British navy on several different ships. One of his last duties was aboard the Q-ship Zebrina, which ended in his first encounter with the Paranormal. After leaving Falmouth in Cornwall one September morning in 1917, The Zebrina was found washed ashore on Rozel Point, south of Cherbourg, without any of it’s crew. and he was the only crew member left on the ship.

He never talks about what happened, but shortly after he was approached by a recruitment agent from the PIB. Since then he has been serving the world’s hidden war against the paranormal threat.

As you can see, we have changed the style considerably from the previous model, but we feel we have landed on the perfect style for our agent characters with this one. What do you think?

Our next character is currently under modelling, so stay tuned to see what our artist comes up with next!

Ståle, our lead artist has been hard at work the last couple weeks with the agent concepts. He first drew up eight different agent concepts, but we wanted to have 4 to focus on for our first iteration of the game. As we wanted a soldier, a medic, an occultist and a psychoanalyst for our first iteration, we asked through our channels which ones you liked best among the occultists and the soldier concepts. 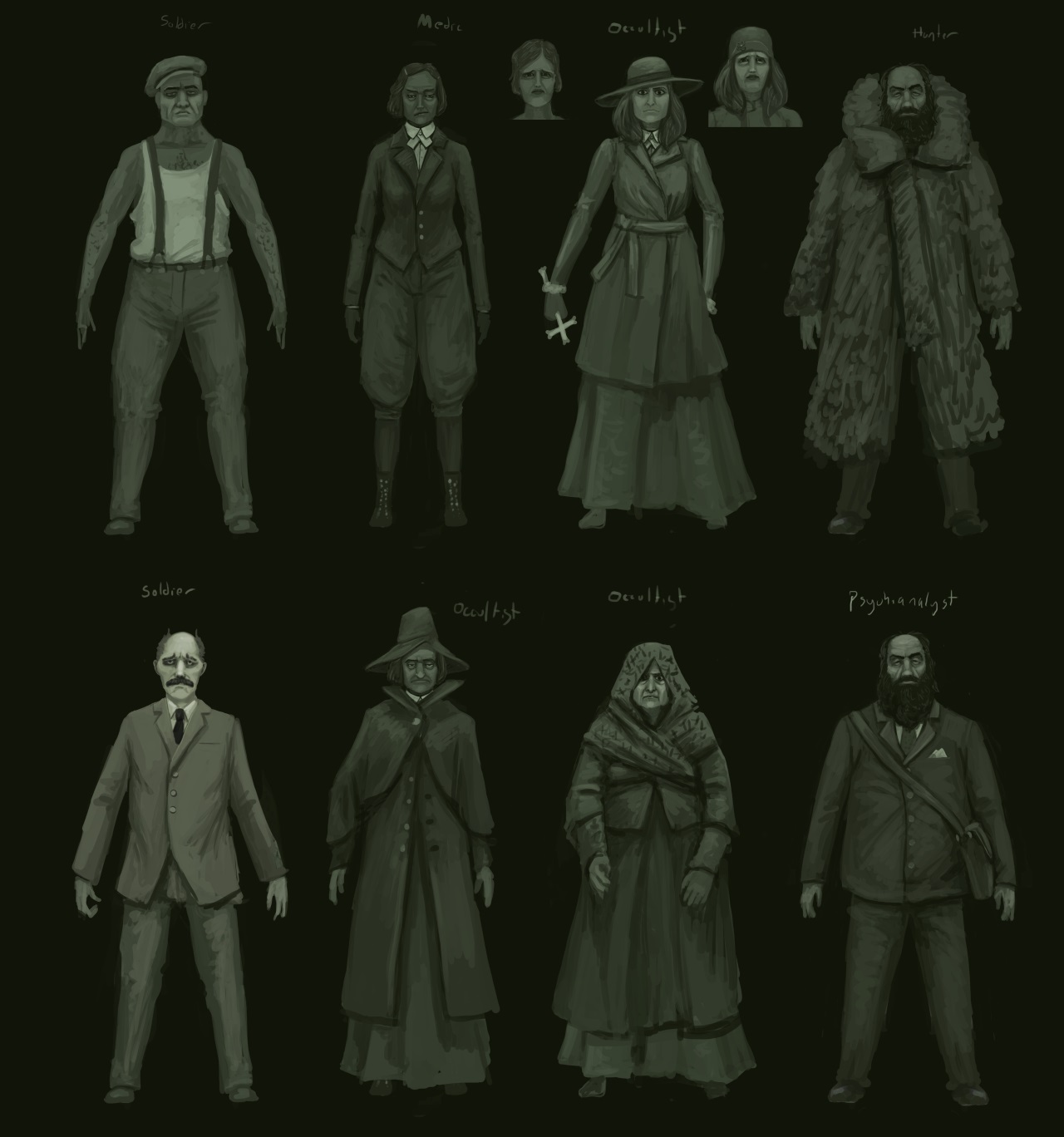 The 8 first agent concepts. We chose 4 of these to focus on first.

You have spoken and not surprisingly, you chose the modern occultist woman and the more gruffy soldier.
Ståle spent the last week drawing up turnarounds for each of the chosen concepts and our artists will soon start modeling them into 3D! 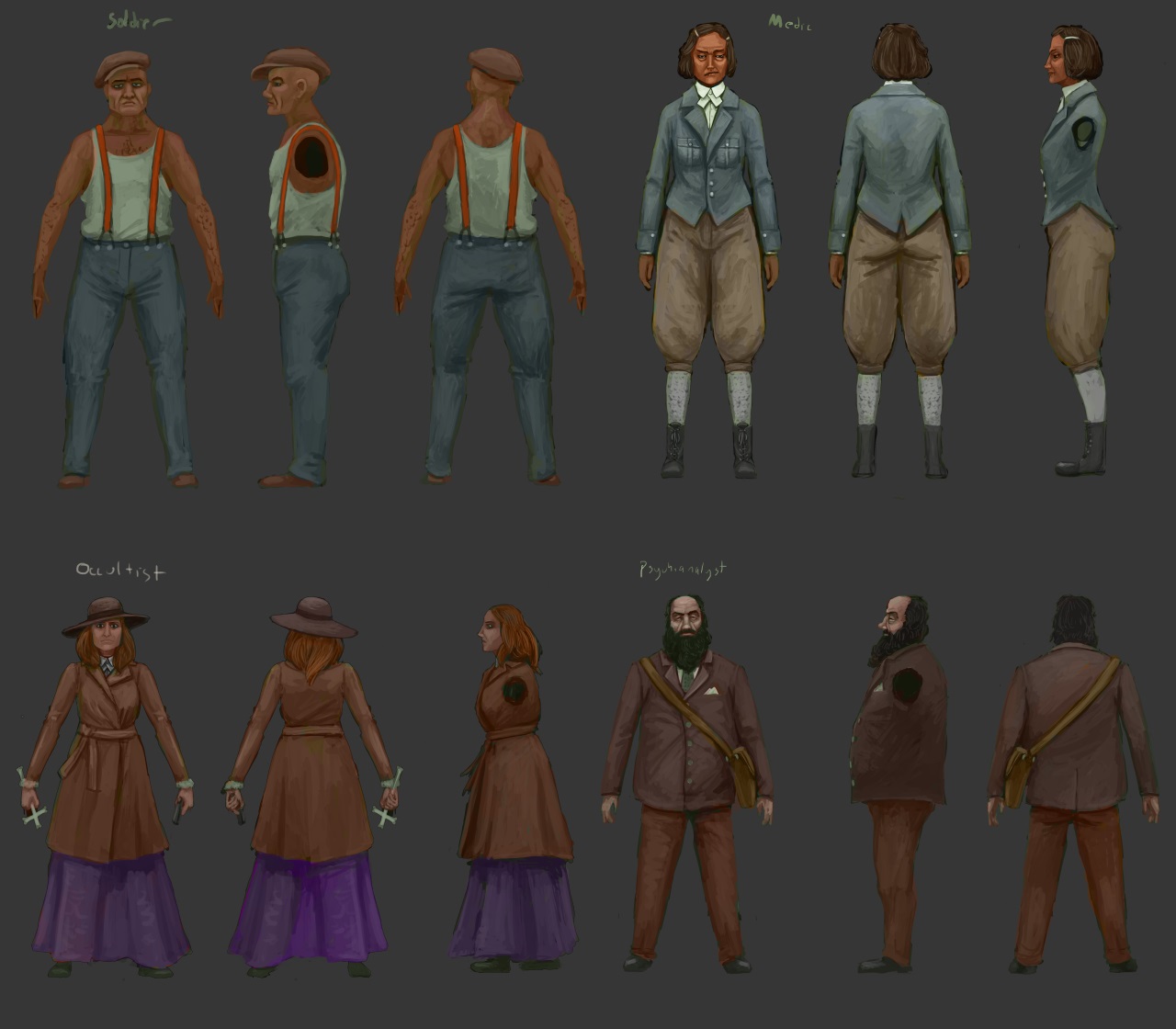 Turnarounds of the agent concepts we decided to focus on first.

I don't know about you, but I for one am really looking forward to see them in 3D :D

When the stars are right, the veil between our reality and others become dangerously thin. So thin that breaching through can be done with minimal effort by even the weakest of magic rituals or pseudo-scientific contraptions. These wounds of the veil allows corruption from more ominous realms to pass into our world, transforming innocent creatures into paranormal entities of legend and unleashing inexplicable horrors unto the world.

Cults of our world work to tear this veil open with obscene rituals which will summon forgotten horrors of ancient times, and to conjure up portals that could reach outside of the ordered universe, to summon the Ultimate Gods.

The only real defence against these beings, entities, and events of the paranormal is an old and ancient world-spanning order – now known as the Paranormal Intelligence Bureau (PIB). Agents recruited from around the world, fighting to rid the world of this ominous threat.

Inspired by games such as the XCOM and Final Fantasy Tactics Series, Paranormal Intelligence Bureau will be a tactical turn-based game. The goal is to save the world of the roaring 20's from a threat of paranormal nature.

From your headquarters aboard a majestic zeppelin, you control a roster of agents to combat the paranormal threat, close shut any ruptures in the veil and banish the Elder Gods themselves.

Beat the paranormal and save the world!

Agents are the main tool for the player to not only respond to paranormal events, but also handle matters at the HQ. Each agent is trained within roles with their own set of unique abilities:

The Lovecraftian Mythos plays a huge role in the game with entities like:

The Team
Kybernesis[//], founded 2007 have so far released one game, Wasteland Bar Fight[//]. The team members vary from self-taught developers to bachelors and masters within game design, writing and music.

Blink Studios[//], founded 2011, consists of 4 veterans from the industry, Sigbjørn Galåen, Eigil Jarl Halse, Kjetil Hjeldnes and Christer Sveen. Their track records include such games as The Thing, Dreamfall, Dreamfall: Chapters, Messiah, Age of Conan and The Secret World.

From Bouncy Rock Entertainment we have Jonny Ree with over 10 years of experience in the international game developement scene with titles such as Neverwinter Nights 2 and Darkfall in his portfolio.

And we have some additional writing help from writer Justin Bruystens[//] too.
Popular Discussions View All (2)

What is your dream feature for a XCOM meets Lovecraft game?
Kybernesis

New style for our characters, love it or hate it?
Kybernesis
< >
36 Comments

Shmoogy Feb 16, 2016 @ 1:56am
so you had people who worked on the old ps2 era game the thing? if so i enjoyed that game, maybe this can be a greenlight success

Kybernesis  [author] Feb 16, 2016 @ 1:44am
@Chokmah: Yeah we love stuff like that. One of my favorite takes on Insanity, and health too, is Dark Corners of The Earth. Brilliantly immersive :D
< >