Greenlight > Games > Antti's Workshop
Greenlight is being retired. For more information on how to submit games to steam, refer to this blog post.
This item has been removed from the community because it violates Steam Community & Content Guidelines. It is only visible to you. If you believe your item has been removed by mistake, please contact Steam Support.
This item is incompatible with Greenlight. Please see the instructions page for reasons why this item might not work within Greenlight.
Current visibility: Hidden
This item will only be visible to you, admins, and anyone marked as a creator.
Current visibility: Friends-only
This item will only be visible in searches to you, your friends, and admins.
Gun Bombers
Description Discussions0 Announcements3 Comments44 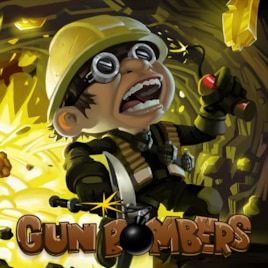 Antti
Offline
See all 5 collections (some may be hidden)

View Gun Bombers in the store

Store page
Recent Announcements View All (3)
We are on Early Access
December 2, 2015 - Antti

You can find the store page here: http://store.steampowered.com/app/416180

Out of the blue, Gun Bombers has been Greenlit. It didn't quite make the top 100 but nevertheless it is in. I am of course super happy with that and I want to thank all of you that made it happen! What more is there to say? Look forward to seeing Gun Bombers on Steam soon! :)

Read More
Description
In a Nutshell
Gun Bombers is a top-down 2D arena shooter. Play with up to 6 players (LAN / Online) and fight for survival in randomly generated and fully destructible maps.

How it works
This is a round-based multiplayer game. In each round you mine for gold, treasures and other specialty items that might aid you. You also have to watch out and combat other miners until the last survivor or when the round time is over. In between the rounds you purchase and equip yourself with better weapons, bombs and items. You score points for various things including mining minerals and defeating other miners. The winner is the one with the highest score after the final round.

Features
Current State & the Future
Please note that the game is in active development and has been since December 2013.

The game is already fully playable and heaps of fun. We hope to bring Gun Bombers as soon as possible to Steam Early Access in order to further improve it with the help of the community.
< >
44 Comments

Good luck on your project.

@Communist38: Unfortunately this won't be heading to phones or tablets. It is very much geared towards PC gaming. Linux and Mac are a possibility.

@Grimwind: No local multiplayer I'm afraid. You really need a mouse and keyboard for best gameplay experience. Gamepads were tested early on but the precision just wasn't there.

@Halfgeek: I realised a long time ago that screenshots could never sell this game. You have to see it in action or play it yourself. That's a shame but I'm hoping word of mouth will reach players eventually. Almost like selling Dwarf Fortress with screenshots - there's just no way! :)
< >

Gun Bombers has been Greenlit and is now listed in the Steam store. For the latest information, purchase options, and discussions for Gun Bombers, please see it on the Steam Store or in the Steam Community.
Visit Store Page
For more details Visit Community Hub
For latest discussions
If you really, really want to, you can continue to the Greenlight page. Information on this page may be out of date, since all the action has moved to the areas noted above.