Greenlight > Games > Hybrid Beasts's Workshop
Greenlight is being retired. For more information on how to submit games to steam, refer to this blog post.
This item has been removed from the community because it violates Steam Community & Content Guidelines. It is only visible to you. If you believe your item has been removed by mistake, please contact Steam Support.
This item is incompatible with Greenlight. Please see the instructions page for reasons why this item might not work within Greenlight.
Current visibility: Hidden
This item will only be visible to you, admins, and anyone marked as a creator.
Current visibility: Friends-only
This item will only be visible in searches to you, your friends, and admins.
Hybrid Beasts
Description Discussions4 Announcements18 Comments235 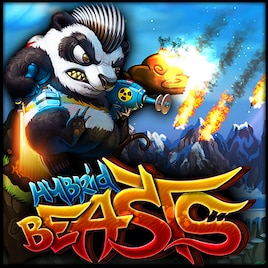 We are very happy to announce that the new build 0.85.1 of Hybrid Beasts (Beta) unlocks Winter world region called "Frozen Marsh". Now, we have already three regions (Butterfly Forest, Skull Desert and Frozen Marsh) with currently 25 levels playable. Anyone can join our beta test at http://hybridbeasts.com/beta . Have fun!!

We just uploaded a NEW beta build (0.83.8) of Hybrid Beasts that unlocks the Earthquake weapon, and the items Beast select, Baseball bat and Rope.

Additionally, we implemented a new dynamic focus system that much better shows what happens on the battlefield. Furthermore the levels Hanging bridge, Rift passage and Sand tower in the Skull desert region are now unlocked and playable.

More details about the new build can be found at http://hybridbeasts.com/forum/announcement/id-23

Everyone can now join the beta of Hybrid Beasts! Visit http://hybridbeasts.com/beta to learn more.

Read More
Description
Release date: Early Access &amp; Demo: Q4-2015, PC: Q2-2016, Other platforms: Q3-2016
Summary
Hybrid Beasts is a unique cross-genre game that brings together strategic turn-based action and open-world exploration and adventure. At its heart, teams of never before seen creatures battle against each other to conquer and defend regions of a mysterious world full of secrets, quests and adventures that are being discovered in the process. Hybrid Beasts aims to push things forward in the genre by introducing a number of novel and original features.

Hybrid Beasts  [author] Nov 15, 2015 @ 6:57pm
@√itamin ∃X : Thank you for your comment! If you care to learn about the many features that make Hybrid Beasts different from other titles, please feel free to have a look at the corresponding page on our website [hybridbeasts.com]. ;-)